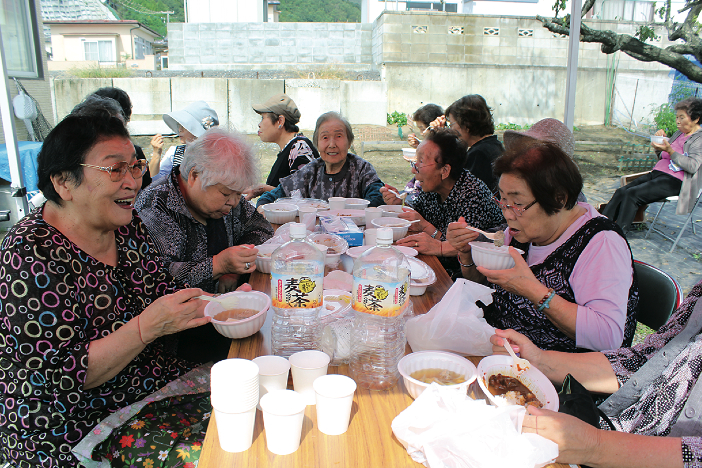 The farewell ceremony concluded with a large banquet shared by many residents.

After more than five years of loyal good service, this community café has closed. It is time to pay it a fitting tribute.

The end of September saw the closure of Hana House, a community cafe where, after the 2011 earthquake, residents of Kazuma-minami district in Ishinomaki city would gather. After the disaster places to meet had disappeared and this establishment was set up as soon as rebuilding began. On September the 24th, a final event was organized to say thank you to Hana House. Many who had contributed to this project, as well as local residents, came to show their gratitude for this place where they had been able to find some peace and comfort.

Hana House was conceived as a meeting place for people living in the neighbourhood to come “to talk together about everything and nothing” and “to help leave everyday problems behind them by having a chat”. Its name, “hana”, comes from “hanasu”, which mans “to talk” in Japanese, but its pronunciation is the same as the word for “flower”. It was built in November 2011 in the centre of Kazuma-minami, which had been completely been destroyed by the tsunami. The project had help from cosmetic company L’Oreal Japan, whose headquarters are in Tokyo. The company rented the land and built this establishment of 80 square metres. At first it was managed by the not-forprofit international organisation JEN, which supported several reconstruction projects in Ishinomaki, then in 2013 by another local group: the Ishinomaki Sports Development Help Centre. A committee made up of local residents used it frequently for its meetings, which led to Hana House becoming an important activity centre for the area, where many events of all kinds took place.

Originally this cafe was only meant to have a lifespan of two years and five months. However, in response to the local residents’ wishes, the lease was renewed year on year. However five years after the earthquake, with reconstruction well underway, the extended contract came to an end and Hana House had to close its doors.

A final event was organized under the banner “Thank you Hana House”. Many people, especially the more elderly, arrived early, demonstrating their desire to express their gratitude. During the ceremony there were speeches from some of those who had contributed to the project, including Matsumura Yoshiyuki, the interim director of the Ishinomaki Sports Development Help Centre. “The development of this venue was made possible thanks to all your support. It has brought us great pleasure to contribute to the development of our community and to help reenergise the lives of local residents”, he said. Iiura Maki, vice-president of L’Oreal Japan, had travelled from Tokyo for the occasion and thanked everyone who had made Hana House a reality. “With you at our side we have learnedmany things during the past five years, and it has greatly encouraged us. We thank you from the bottom of our hearts”, she told the gathering.

A large banquet was organized for the closing ceremony, as well as a karaoke competition; the kind of event that regularly took place at Hana House. A lot of people joined in and shared memories of the time they had spent together during the past five years.

Nishimura Shige, a district community leader and former director of the cafe, was unable to hide his emotions. “It is thanks to Hana House that our region has been able to recover and people have been given the strength to help and support one another. This closure is very sad, but it also means that a new step has been taken on the path to renewal”, he said.

As the ceremony ended the local inhabitants watched with emotion as the “Hana House” name plaque was taken down.