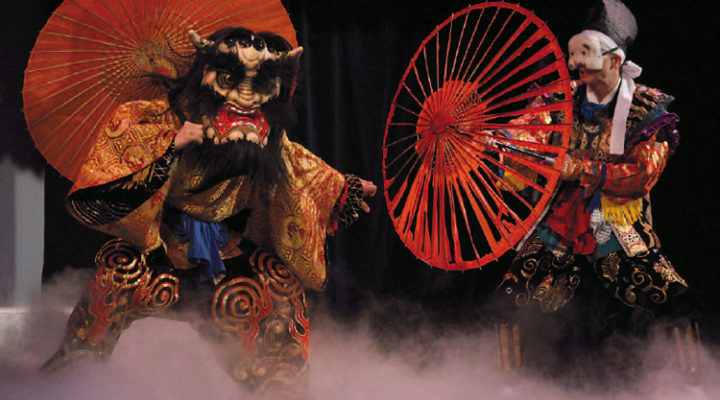 The monster and the umbrella seller, performed by the Yokota Kagura troupe.

This theatrical art form intended to entertain the gods is particularly wellestablished in this still very rural region.

Climbing the lantern-lit steps to Waseda Jinja, a small Shinto shrine on the outskirts of Hiroshima, the smoky tang of festival food wafts down to greet you: grilled squid, fried chicken, toasted taiyaki buns, fishshaped and crammed with cream.

People of all ages are gathering around the small outdoor stage alongside the shrine. A group of older men banter loudly, while at one of the nearby stalls, their grandchildren try to catch goldfish with a paper scoop. Schoolgirls study their smartphones and giggle.

Far above the gaiety, the moon is rising over the mountains, silhouetting the pine trees on the crest. The wind swishes through the bamboo. Like a cheerier version of an H.P. Lovecraft tale, you sense the presence of the kami (gods) lurking on the threshold in the primeval darkness of this autumn night, just beyond the shrine’s cosy lights.

The veil between this world and the realm of the kami suddenly feels very thin. For tonight we are gathered here for a performance of Kagura, the dance and music spectacle that has been tearing that veil away for a thousand years. Kagura means Place of the Deity. Its exact origins are uncertain, but it’s believed to have existed as far back as the Heian Era (714-1185). Many say its origins date back to the mythical beginnings of Japan itself, to that pivotal moment when “the sun goddess Amaterasu shut herself away in a cave and refused to come out. So the goddess of mirth and revelry, Ame-no- Uzume, performed a dance in front of the cave and lured her out. This dance is considered to be the origin of Kagura”, says Keiji Masuda of the Hiroshima Kagura Cultural Institute.

From this original ritual for the return of the sun, Kagura evolved as a means of entertaining the gods, as well as giving thanks for the rice harvest. That’s why it’s traditionally performed at Shinto shrines – the places where deities dwell. Today, Kagura is popular in many regions of Japan. One of its traditional strongholds is Hiroshima Prefecture, where it spread from Izumo via Iwami in neighbouring Shimane Prefecture sometime in the Edo Era (1603-1867). By the end of the Edo Era, over 100 troupes existed in the Hiroshima region. 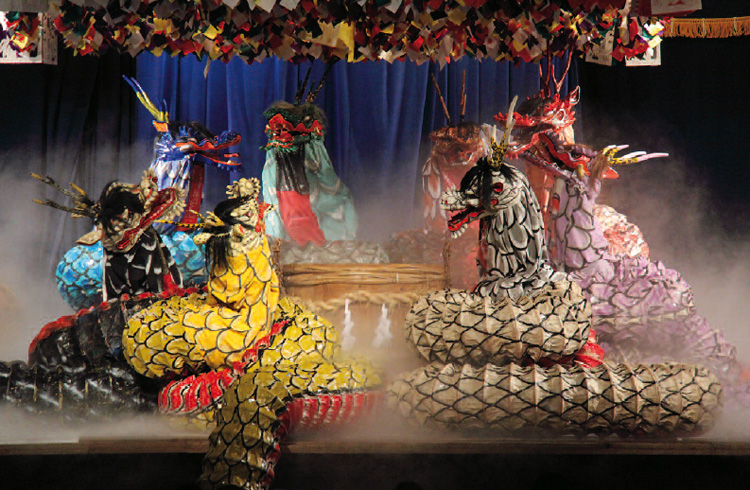 Giant serpents from the Hiyoshi Kagura troupe, in Midori

“Many Kagura stories are based on the Kojiki (An Account of Ancient Matters) and Nishon- Shoki (The Chronicles of Japan), the two historical records of Japan compiled around 720 CE,” says Akiho Shimose of Akitakata City Tourism Division. Other stories draw on agricultural rituals, myths, legends and historical stories from the Heian period (794-c.1185). “Recently, we also have Kagura stories based on Kabuki or Noh”, Shimose adds.

However, unlike the slow, measured pace of Noh and Kabuki, Kagura is thrill-a-minute stuff, packed with scary monsters, dragons, magic and sword fights. So it’s no surprise that Kagura became popular as entertainment not just for the kami, but also for mere mortals. As its popularity grew, embellishments were added, making it even more attractive to audiences, like the spellbinding synchronization between dancers and music, which was not a feature of traditional Kagura. Those fabulous costumes were originally much plainer, too: just dyed cloth adorned with simple floral designs. In contrast, today’s Kagura costumes feature glorious tigers, dragons and demons, embroidered with threads of real gold and silver. They can weigh 20 kilos and cost over a million yen.

Fearsome monster masks and fire-breathing dragons, up to 17 metres long, also add to Kagura’s flamboyance. So even if you don’t get the story, you’ll still be entranced.

In Hiroshima Prefecture, Kagura is as redolent of autumn as the changing colour of the maple trees. Performances at shrines throughout the region provide the highlight of autumn’s rice harvest festivals. And now, thanks to Kagura’s surging popularity, you can also enjoy performances throughout the year at halls and culture centres.

Today, Hiroshima is home to 200 Kagura troupes, with five different regional variations, from Geihoku, deep in the mountains of the north, to the Geiyo Islands in the Inland Sea. Akitakata City, in the north of Hiroshima, is home to 22 troupes and even boasts a purposebuilt Kagura venue, the Kagura Monzen Spa Village (Kagura Monzen Toji Mura), featuring a Kagura museum and weekly performances, indoors and outdoors.

Over 20 Kagura contests are held throughout the prefecture each year. These contests have played a key role in promoting and preserving the tradition, as well as in refining its artistry. It’s a responsibility that the dancers and musicians – all amateurs – take very seriously. “Most dancers start Kagura at elementary school (from age 6 to 12), and have over 15 to 30 years’ experience,” says Shimose.

In a humbler setting, back at Waseda Shrine, four musicians in the Shinto dress of black hats, white shirts and billowy black pants have just taken the stage. They kneel in a line, stage right, and pick up their instruments (one big drum, one small drum, finger cymbals and a flute) and launch into a lilting riff.

Tonight’s tale starts off with a young maiden who gets devoured by an evil old hag. Enter two handsome warriors with long black tresses and glittering robes. They confront the witch. But in a nanosecond she turns into a fearsome white fox demon. The crowd gasps. Children scream. The two warrior heroes draw their swords and commence battle with the fox, spinning and whirling round the tiny stage. The music builds into frenzied waves of sound. Faster and faster, the trio spin as if in a trance, so close together it’s amazing no one gets lacerated. Suddenly, with a touch of the heroes’ swords, a spider’s web-like net falls over the fox, seemingly signalling its end. The music slows; everyone breathes a sigh of relief. But just as you think it’s all over, clouds of dry ice flood the stage and four of the biggest, baddest dragons you’ve ever seen emerge from the haze, eyes flashing, jaws gnashing, and spitting fire.

The relentless rhythms surge again, louder, faster. The heroes and dragons commence battle, this time even more frantic than before. You wonder how they can spin so fast and not fall off the stage. At one point, a dragon snares one of the heroes in his long coiled body, but he fights his way free.

Finally, after more than two hours on stage, the two warriors slay the dragons. The beasts stagger around in protracted jaw-snapping agony before our heroes cut off their heads and hold them aloft to great applause. Good has won. The maiden is brought back to life and order is restored to the universe. The god is happy and so is the crowd, revitalized after communing with the kami.

PRACTICAL INFORMATION
You can see KAGURA at Hiroshima prefectural Culture Center every wednesday until December 27th. performances are at 7.00 pm and 8.00 pm. english explanations provided. after the event, you can take your photo wearing one of the costumes.