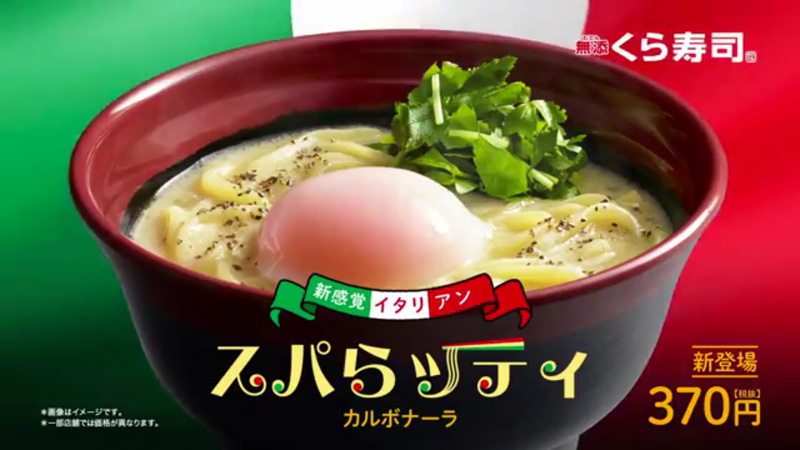 … the meaning of ‘FUSION’ has gone to the next level

It is true that we Japanese value tradition (or at least we’d like to think so), but it is equally true that things in Japan change as fast as a bullet train. But, the ramen noodles, too…?

Somebody must have thought that we are finally fed up with noodles with the usual flavours (yeah, there are only 100 of them after all), and this somebody is none other than the well-known sushi chain eateries.

Traditionally, you don’t see the noodles in sushi bars, and you don’t see sushi in noodle bars. Both of them have survived through thick and thin, several wars and numerous natural disasters. They have sat in our heart not-too-close-side-by-side. They have resisted the ‘which-is-better?’ kind of futile conflict. They are like pleasant enough neighbours, who can greet with smiles but never interfere.

Yet, this sushi chain thought it would be a good idea to serve both in all their sushi bars – over 400.

There’s more. One of their original ramen noodle varieties is a child of forbidden relationship between Japan and Italy. Yes, ITALY! This noodle dish is called ‘Spalatti Carbonara’. Its soupy sauce is made from a 7-fish broth, fresh cream and 3 different kinds of cheese. The noodles are ramen noodles, not the Italian pasta. It also comes with a runny egg on the side.

This is not right. This can’t be right. Surely.

The most annoying thing about it is, not this unusual marriage (or ‘mariage’), but the fact everybody who’s tried it seems to love it. What am I supposed to do now? I see myself succumb to the world of globalisation now…