To enjoy all of sake’s subtleties, the drinking vessel must be chosen with care. Here’s some advice. 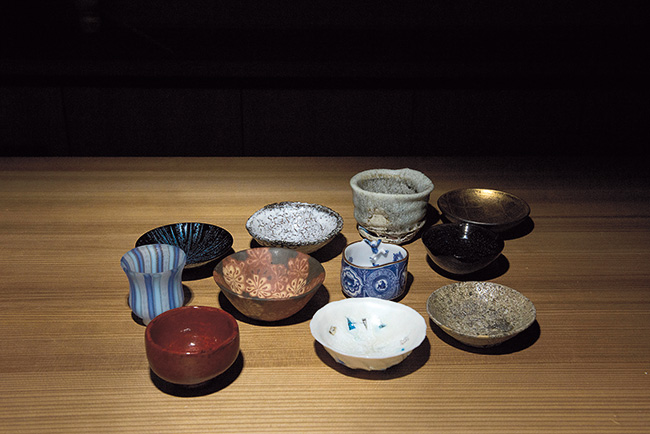 The taste of sake changes according to the drinking vessel used.

T hose who have already visited Japan must have sometimes seen something odd in izakaya (Japanese-style pub): letting clients choose a sake cup from among glasses and cups of different shapes, sizes and materials. This amusing option can also make a difference to the taste of your sake. It’s one of the principal characteristics of this beverage; its taste changes according to the container you use. Traditionally, varied shapes and materials were used to make sake cups: ceramic, porcelain, lacquer ware, wood, bamboo, glass, tin… With the exception of ceramic, the taste of sake can differ according to the shape, size and thickness. Miyashita Yusuke, manager of Fushikino Restaurant in the Kagurazaka district of Tokyo, suggests that some sakes are suitable not only for particular dishes, but also for particular sake cups. Each dish is accompanied by a sake served at the required temperature, sometimes with the addition of a little water to modify its consistency, and offered to you in a vessel that enhances the taste and smell that you want to highlight. So many factors to take into consideration? Somewhat complicated? Complex yes, but fascinating for all that, he replies.

“What’s interesting is that one bottle can have so many facets. It’s up to us to extract every possible characteristic in a single sake,” he assures us. He explains that, though there are specific shapes of glass for each kind of wine, it’s not usual to change glasses when drinking sake unless you are a professional taster. We tend to think that a particular shape of glass is right for a certain wine. But in the case of sake, there are several options. Mr Miyashita suggests trying the same sake in different cups so we can really taste the difference. This doesn’t mean you need to be an expert to appreciate the difference in taste. You can even experiment with a bottle of sake you have at home, using the different cups and glasses on your shelves. According to him, it would be good to keep the following in mind:

• Wine contains 4 to 5 times the acidity of sake, and this is why wine glasses aim to reduce the wine’s acidity by enhancing its full-bodied flavour. If you drink sake in a wine glass, it could lose its acidity and become sweet.

• If the the cup is wide brimmed, the acidity is accentuated; if it’s pear shaped, it’s the sweetness that is emphasized. You could try the sake in a Martini glass.

• You can eat food alternately with wine then with sake in wine glasses. The lack of acidity in the sake can be useful in refreshing taste buds tired from the acidity of the wine. For instance, try serving sake after a white wine before moving on to a red.

• For wine, the nose is all important, while for sake, the fukumika (“flavour in the mouth”) when the liquid passes over the palate, or kaerika (“returning flavour”), the “caudalies” of the finish, which linger in the nose and mouth after drinking, must also be taken into consideration.

Once you’ve recognised how the taste of sake changes in the different glasses you have at home, it’s time to get hold of a traditional Japanese cup and continue your adventure. In Japan, you can buy them in shops selling utsuwa (Japanese crockery), or search for them in flea markets. Here, the same rules apply as for wine glasses: with a wide brimmed cup, the acidity is more apparent, whereas with a narrow brimmed cup, you will appreciate the umami and smoothness more. If you’re looking for a balance between the two, choose a medium brimmed bowl.

For sake cups, you can choose ochoko (small cups), guinomi (large cups), or use a sobachoko (a cup used for tsuyu sauce for soba noodles). Also, as the cups are smaller than wine glasses, you don’t pour the sake directly from the bottle. There are several receptacles for this, such as tokkuri, ochoshi, or even katakuchi (with a spout), which can hold 160-180 mls of liquid, and into which you pour the sake before serving it into cups. Tokkuri and ochoshi are used to heat the sake. Using tin or aluminium receptacles to heat the sake will bring out its acidity, whereas ceramic will give it a smoother taste. The result using porcelain will be between the two. There are even sets of ochoko and tokkuri made from the same material and with matching patterns. It’s easy to buy a cup that we like while on our travels to bring home with us, for example, a practice known as “my ochoko”. Boxed sets of ochoko are available for sale to enthusiasts.

Different cups change the taste, but they are also aesthetically pleasing: nigiri sake (which is slightly cloudy), is best in a red lacquerware cup, whose colour sets off and contrasts with the paleness of the sake. Aged jukusei koshu sake, matured over many years, takes on an amber colour, and can be served in cut glass to best appreciate its rich colouring. Likewise, you can choose your cup according to the season: a cup that epitomises freshness, like blue-coloured glasses or cups; mini-cups to drink the fresh sake quickly before it becomes tired; or a cup that represents warmth, made of thick ceramic, in a rustic style the colour of earth. If the cups are decorated, you can pick ones with seasonal plants or flowers to be one with nature.

You can also choose what the cup is made out of according to the heat of the sake you’re drinking: a tin cup will keep it cool, while a thick ceramic cup is good for hot sake. You can even enjoy sake in a cup made from a material that would be unthinkable for a wine glass: cedar wood cups lend a fresh aroma to sake. Depending on what the cup is made of, it can feel quite different on your lips and when held in your hands: it’s the almost sensual feel of Japanese utsuwa that encourages you to hold it in both hands. Choosing an utsuwa is not just about its visual beauty, it’s almost an encounter with the whole entity of the cup, its origins in the natural world (earth, clay, sand, wood), and the hands of the craftsmen who fashioned it with the help of water, flames, the resin at the heart of the wood…

Miyashita Yusuke, who is also a tea master, noticed that the tea ceremony, which is now considered an art in its own right, had been refined. When it began, the idea was to enjoy every kind of tea. Before it took on the form we know today, there was a period when “battles” between different teas were staged. If it had remained just a matter of judging the quality of the various teas to decide which were good or which were not, the ceremony could not have included an aesthetic element.

In his opinion, for the activity of drinking sake to become an art, it needs to stop judging the differing tastes of sake. You need to leave behind the idea that sake is just a delicious drink, and think about as many ways of appreciating it as possible, by taking into account all the elements (aesthetic, visual, taste, smell, cultural), even the history of the cups, as he also serves sake in antique cups…

By doing this, we’ll be able to fully appreciate the drink that we’re about to raise to our lips, which both enhances the taste of food, and in its turn is enhanced by food. This way of tasting will bring it close to becoming an art form.

No62 [FOCUS] A journey of discovery

No63 [TECHNIQUE] Prints -a magnetic attraction