Like Imada Miho, more and more women are starting to work in the production of the drink of the gods. 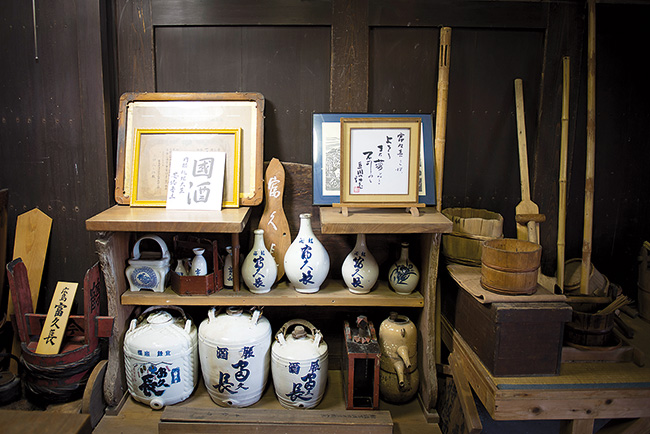 Some of the treasures from the Imada brewery, founded exactly 150 years ago.

Japan has always known how to safeguard its traditions, which have endured for centuries but which also have their dark sides. Many kinds of work and places were forbidden to women (see Zoom Japan no.63, July- August 2018) : the national sport of Sumo wrestling still forbids them to set foot in the ring (during the Edo period, women weren’t even allowed to attend the matches), they were unable to access sacred mountains such as Mount Fuji, nor were they allowed to take part in some festivals, not to mention Kabuki theatre plays performed only by men even today, or Noh theatre where women made their first appearance only after the Second World War.

Though we’re starting to see women hesitatingly take up positions as professional cooks, it’s rare to see a female head-chef in a sushi restaurant: according to popular belief, women are not well adapted to this profession due to their menstrual periods when the rise in the temperature of their hands could spoil the fish…

The world of sake has not escaped this custom either. It’s been said for a long time that to allow a woman into the cellar could impair the sake. But in today’s Japan, there are dozens of female toji (cellar master), some of whom are well known and respected for the quality of their sake. Nowadays, in sake production, the taboo surrounding women seems to be disappearing more quickly than in other traditional areas of work. In Akitsu, a city in Hiroshima Prefecture well-known for the skill of its Hiroshima toji, we met Imada Miho, one of the first female toji, in the family-run Imada Shuzo Honten, founded in 1868. The brewery is situated close to the calm and bountiful Inland Sea. “They say the landscape resembles Sicily,” she remarks, with its temperate climate, surrounded by rolling hills, and an abundance of orange and lemon trees.

Imada Miho is part of the generation of kuramoto toji. Traditionally, the kuramoto, the brewery owner, didn’t deal with the production of the sake, but concentrated on the management of the brewery and employed a toji to take care or the production. For the past twenty years of so, especially in small and medium-sized breweries, the owners themselves have begun to take part in producing sake, both to help solve the crisis that gripped sake production in the 1990s due to a failure in recruiting workers, and to introduce a breath of fresh air inspired by a wish to create sake free from some of the old notions surrounding it. It was this generation that, often, gave up their careers and returned to run the family business or to immerse themselves in something they were passionate about. Imada Miki is no exception. In the beginning, she had no plans to return to the region where she was born to take up the reins of the family brewery. At the height of the economic bubble in the 1980s, having obtained her university degree, she worked for ten years in the world of culture, busy mainly producing Noh theatre plays. The group, which promoted New Noh theatre, received considerable support from Japanese patrons, and she even went to the Avignon Festival to stage a work by Teshigawara, taking a troupe of Noh actors with her… But at the start of the following decade, the financial crisis meant she lost her job, and at home, the family brewery was facing bankruptcy.

She’s the eldest of five brothers and sisters, none of whom wanted to take over the business. So she decided to return home. It’s now twentyfive years since she started to work at the brewery and give it a new lease of life. Contrary to the widely held popular belief, she’s not encountered the situation of “male dominance”. “The toji who had worked for a long time in our brewery welcomed me with open arms, and taught me a lot. The other toji in the region were just as open-minded,” she recalls. She assures us that this is characteristic of “Hiroshima toji”.

“Our region is well-known for its extremely soft water, and water containing few minerals is not suitable for sake production. Fermentation is very difficult and risky with water of this quality. In this situation, sometimes unfavourable for successful sake making, the “Hiroshima toji” exchanged information and know-how so that they could work together to improve the region’s sake. They considered this difficulty to be an opportunity, and invented the ginjo method, a lengthy fermentation at a low temperature, which brought out a fine flavour, and thanks to which the name of the Hiroshima toji gained widespread recognition. The “Hiroshima toji”, who were now considered to be highly qualified professionals and became much sought after, left to work in other regions. It’s not without reason that in the 19th century, Taketsuru Masataka, the son of a Hiroshima brewer, travelled to Scotland to learn about whisky production. We have a traveller’s mindset, a thirst for knowledge,” she adds.

She concludes that this spirit is, without doubt, what allowed women to take part in sake production. Moreover, when she joined the family brewery, there were already two women working there. As a child, she watched her mother at work there. During the sake making season, the toji and kurabito (brewery workers) slept on the brewery premises. Everyday, from dawn until dusk, her mother prepared meals for seven or eight workers. “It’s often said that there were no women in the breweries, but without them, sake production would have been impossible, as it was always the women who supported the men’s work. In the Tohoku region (see Zoom Japan no.20, June 2014), the toji brought their wives with them. It all depends on what you mean by ‘the presence of women’.”

Imada Miho, immersed herself in the world of Hiroshima sake at the age of 33, and tried to progress and to learn. She said she felt she was a true professional for the first time seven or eight years later, when the toji who had worked for them for as long as she could remember retired, and she had to plan everything from A to Z on her own. So she set out to find a taste that could become “her” sake, one that was not only unique but with strong connections to the region. She understood that sake is made with rice and water, and that as the quality of the water doesn’t change, she needed to search for a particular type of rice. During this search, she discovered the rice native to the region, hattanso. This variety grows to double the height of standard varieties and is more difficult to cultivate, so was not readily available. The Institute for Agricultural Research, which conserves seed, agreed to give her a small quantity so that she could try to cultivate it. When asked why she started out on this risky process, which at the very least required an investment of a great deal of time and energy, she replies that she was curious to discover the taste this variety was hiding in its small grains. Unlike the well-known varieties that have been used for a long time to make quality sake like yamadanishiki, the hattanso variety, in her opinion, characterises rugged strength and an upright stance, and the sake made from this rice is a good accompaniment to dishes with aromatic herbs. Generally speaking, sake does not go well with strong smelling herbs, but she assures us that the strength of this native variety makes this a good combination. She also began a quest for a flavour to accompany the regional dishes of Akitsu, and created a sake using white koji. For the process of fermentation, the yellow koji fungus is generally used, but with white koji, the citric acid is more apparent, and it’s a marvellous accompaniment to oysters, an Akitu speciality, or other seafood available from the Inland Sea. Research into native rice varieties, as well as new production methods, is a common trend among the younger generation of sake producers: they are looking for a sense of locality, a return to original sources, and are eager to experiment in order to unearth new opportunities for the world of sake. Her sakes mirror the gentle landscape of the region, and are highly thought of outside Hiroshima, not only in places such as Tokyo but also abroad. Two years in a row, two of her sakes have won the “Kura Master” prize, an award created by French sommeliers. Nowadays, women aren’t content just to play a supportive role for male brewery workers, they work alongside them preparing the saki, and some of them become toji, responsible for sake production, as working practices have changed. When brewery workers lived and worked together in the brewery for months at a time, it was difficult for women to enter the profession. Their progress was slow not only because they sometimes came from other towns but also because the day’s work began very early and it was necessary to supervise the preparation of koji (the fungal mould indispensable to the fermentation process) both day and night. Imada Miho maintains that the choice for her generation was between working as a toji or the life of a woman: to be married and have children. Today, thanks to new technology, the temperature of koji can be regulated from a distance. Technical innovations have made the control of hygiene and fermentation easier, and its possible to have a career as a toji as well as a private life. Trained by male toji who wanted to pass on their knowledge, she’s optimistic about the future for women in the profession.

Imada Miho uses a very interesting word to describe the taste of the region’s sake: ko-aji. For her, this term meaning a “delicate taste”, represents the essence of the local taste. It’s the opposite of o-aji, or “rough taste”. Though o-aji is a word in current use, ko-aji is rarely used, especially as what is in demand today is a simple taste, a taste that immediately speaks to you. “The fish from the Inland Sea, for example, the Japanese half-beak fish, bass, small squid or other small fish, are not as oily as tuna. It’s not an immediately acquired taste for everyone, as it’s subtle. It’s a taste that whispers to you,” she explains.

You have to get to know ko-aji. You must pay attention to the delicate changes the seasons make to the sake. According to her, the region’s sake tries to accompany this whisper of a taste. All the sakes she produces are made within this universe of ko-aji. When taking a sip of one of her sakes, you sense a light acidity, which brings to mind the far-off aroma of the lemons you caught sight of a little earlier on the hillside, from where you saw the sea and heard it utter: “From here, you’ll see nothing that isn’t beautiful”. And it’s true, the landscape appears to be in perfect harmony. And everyone can agree that she’s found the place where she can produce “her very own” sake, created by her and which fully reflects the the landscape of Akitsu.