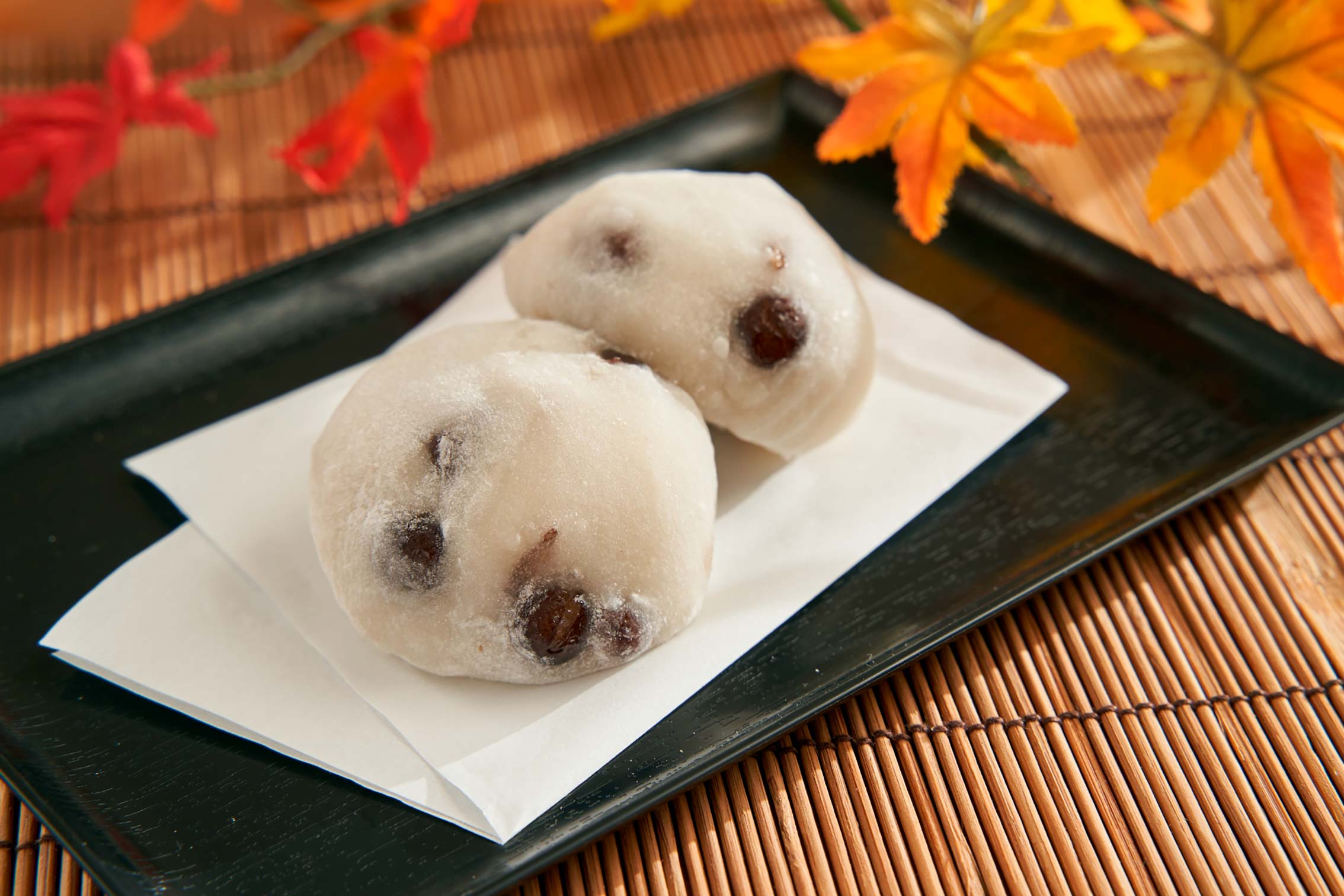 Of all the Japanese sweets which would I want to eat the most? When I thought about this, one of my favourites which has recently become very popular on Tiktok has to be «daifuku mochi». With just mochi flour, sugar and water you can make this soft and fluffy sweet.You can fill it with bean paste, cream, fruit and so on. Despite its simplicity, the softness of the mochi and the combination with the filling can create an exquisite taste. Personally, daifuku with uncooked strawberry and red (or white) bean paste is so delicious that I think it’s hard to beat! It’s hard for me to believe that some people don’t like daifuku mochi. (Although my English husband doesn’t like mochi at all!)

So what about the name daifuku? In Japanese, daifuku is written as 大福, 大 or “dai” meaning large or very and 福 meaning blissful. So how did it get this name?

The history of daifuku mochi and the origin of its name

Daifuku is said to have started with sugar sprinkled on a very simple rice cake called quail rice cake, which was popular for common people in the Edo period. When it was first sold, it was called «harabuto» or «daifuku / taifuku» because it is more filling than other foods.
Kanji lesson: hara 腹=belly, buto 太=wide or large, tai 大=large.
It is said that the name daifuku, which is currently used, is derived from the fact that the Japanese character for belly, which was once used, was changed to the character for blissful.
Since sugar was a luxury item in the Edo period, the alternative salt flavored daifuku was common at first.
Salty daifuku? Can that be delicious? It’s a taste that is hard to imagine for us who are too accustomed to living with sugar.
Daifuku, which originated in Edo, quickly became popular and spread throughout the country. At that time, not only raw rice cakes but also ones baked were sold. Since then, as times changed, there has been a lot of interest overseas, including Europe and the United States, and it has been loved by people all over the world as a traditional Japanese sweet. 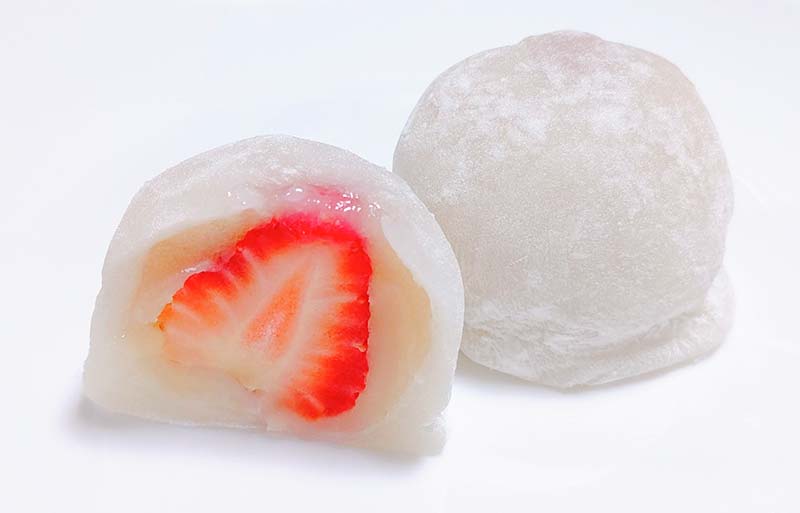 Daifuku looks and tastes very different depending on the ingredients used and how it is made.
The basic white daifuku is simply a white rice cake wrapped in red bean paste. Strawberry daifuku, invented in the latter half of the Showa period, has a refreshing taste due to the balance between the sweetness of the bean paste and the sharpness of the strawberries. Growing in popularity it was developed into fruit daifuku, which combined bean paste with other fruits. A new taste was born. There are various fruit fillings, such as oranges, kiwis, grapes, peaches, mangoes, and melons. In any cases, soft rice cakes and soft fruits are often used to match the textures. In addition, the colorful slices are also excellent for photogenic effects on social media.

Now very popular among young people on Tiktok is a new style of daifuku mochi with ice cream inside. I admire the person who first thought of this. Furthermore, daifuku mochi can be colored by mixing other ingredients with daifuku dough.You can also bake the finished daifuku or covered with sesame seeds. There are a wide variety of colours and appearances, including decorations.
Daifuku mochi now has various styles, tastes, and textures. Isn’t that why it continues to be loved through the ages by everyone? What kind of new and innovative ideas will we see in the future? I am looking forward to the next «Daifuku Revolution».
It’s surprisingly easy to make at home in the microwave. I would like to introduce a daifuku mochi recipe.
New syles of dorayaki

Recently, the filling is not only bean paste, but also custard, chocolate cream, cream and fruit, and also ice cream. There is a new style of dorayaki with unlimited possibilities.
There is also an interesting version of dorayaki that is fried like tempura! In the sweets class I host, I always try to make less interesting things look more appealing and cute.
I make my own version of dorayaki with anko piped into flower decorations in between two pancakes. Before eating I would put the top pancake on top of the flower to make a sandwich in the same way.
Of course, I do feel a little sad squashing the beautiful flowers! However, sweets are not just delicious and beautiful – they are something to be enjoyed as part of a social gathering, chatting with friends. 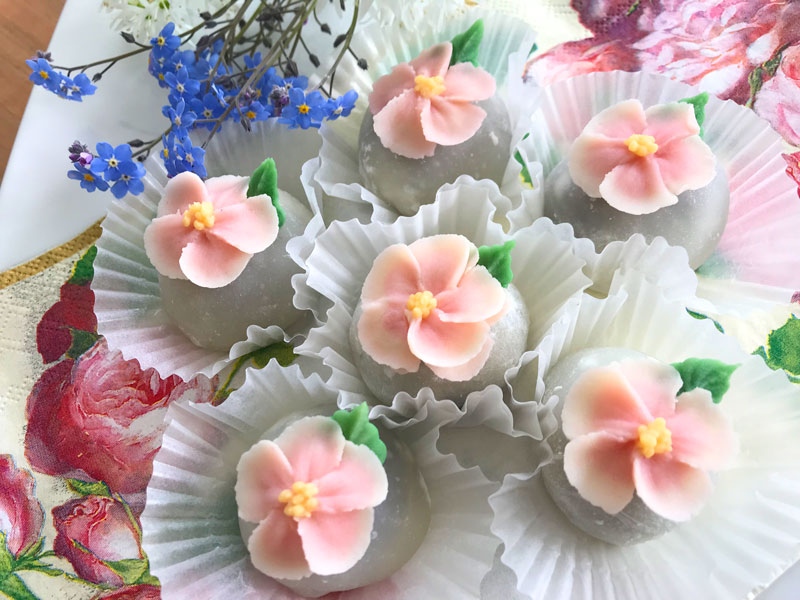