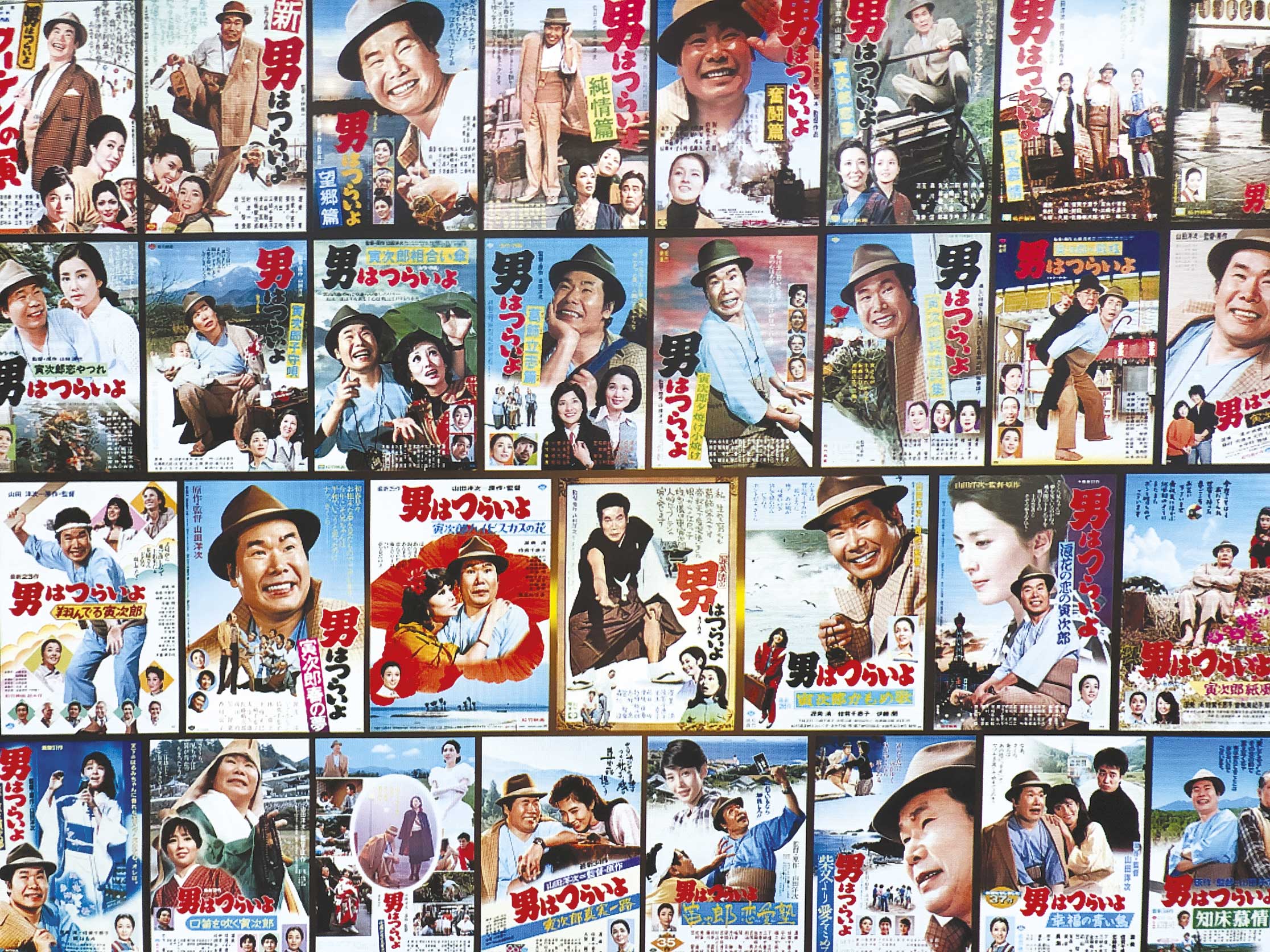 This fictional character created by the filmmaker Yamada Yoji has left a deep impression on Japanese society.

Between 1969 (1968, if we count the TV drama) and 1995, Tora-san was a constant presence on Japan’s small and big screens as new instalments of the Otoko wa tsurai yo (It’s Tough Being a Man) series regularly came out once or twice a year. The saga may have ended, and younger people hardly know who Tora-san is, but his picaresque adventures still represent an important cultural heritage. In “Japaneseness According to Tora-san”, an essay published by the Matsushita Institute of Government and Management, Okazaki Hiroki argues that Otoko wa tsurai yo expresses the essence of being Japanese. For example, while the series shows the social and cultural changes occurring in the 1970s and ’80s, it also highlights the importance of the country’s traditional values.

“It is said that the idea of Japaneseness is disappearing these days,” says Okazaki, “and many point out the fact that the traditional ties in local communities have become weak. In rural society, people treasured the wisdom of their ancestors and the village elders. However, urbanisation has diluted those commonly shared values. “Even Tora-san’s family and the Shibamata area are portrayed as transitioning from rural to urban society – a process that often causes conflicts and misunderstandings. However, the shopping district where Tora-san’s shop is located has continued to thrive. The shop owners seem to understand that they must stay united in order to compete with large department stores and shopping malls.”

Tora-san is indeed a stubborn rebel who prizes individual freedom, but the spirit of wa or harmony eventually prevails in each episode of the series. “The sense of devotion to the happiness of family, friends and neighbours never wanes thanks to the strong ties within the community,” Okazaki says. “In the end, getting along with each other is the most important thing. This is achieved through discussion and cooperation. From ancient times, the Japanese have understood that for things to go well, we have to be compassionate and avoid being selfish.”

To make his point, Okazaki focuses on Tora-san’s relationship with the women he falls in love with – the so-called Madonnas. “Tora-san chases women all the time,” he says, “though he always ends up empty-handed. There are times when he seems to be on the verge of getting what he wants, but he often draws back at the last moment, sacrificing his feelings to the greater good.” “A typical case is the fifteenth sequel in the series, Torajiro aiaigasa (Tora-san’s Rise and Fall, 1975), in which the protagonist admits that Lily, the woman he loves, ‘is a smart, well-tempered lady. She can’t be happy with a fool like me’. In other words, Tora-san puts aside his feelings for Lily as he thinks about her happiness first. It can be said that Tora-san’s attitude perfectly expresses the spirit of wa, which the Japanese have cherished since ancient times.”
Kikuchi Masashi, a political reporter for Nippon Television, presents a different interpretation of Tora-san’s influence on Japanese society. In an article published on the website of Gendai Shinsho magazine (“What do you think of Tora-san in Japan today?”), Kikuchi says that people nowadays are less likely to get angry like Tora-san did. This is because they have forgotten the lessons learned from the disastrous Pacific War.

“Tora-san preached to intellectuals and elites who were bound by social customs,” Kikuchi says. “He conveyed the need to get rid of social vanity and focus instead on loving people, thinking about one’s own family, and reaching out to those who are in trouble. That’s why people forgave Tora-san’s faults and sympathized with him. “Once upon a time [in the 1950s and ’60s], the Japanese were happy to express their anger. Both workers and students complained and participated in demonstrations in their tens of thousands. They flooded the streets, besieged Parliament in Tokyo and clashed with the police. But Tora-san was needed in later decades as well. In the 1970s and ’80s, for example, corruption and the waste of taxes was very prevalent, and Tora-san continually displayed his indignation about politics and general wrongdoing.” In a 2015 interview in Asahi Shimbun’s digital edition, director Yamada lamented that “Japan was fine from the 1960s to the ’70s. Young people had great vitality. Atsumi-san [the actor playing Tora-san] understood the importance of ongoing discussion and supporting minority opinions.”

Speaking of Yamada, Kikuchi mentions a TV interview broadcast on 11 January 2020 in which the director confessed that in the beginning, he had underestimated Tora-san’s appeal. “I thought such a person couldn’t live in contemporary Japan,” the director said. “He clearly wasn’t allowed to live freely as he wished, so he had to die. That’s why I killed him in the last episode of the original TV drama.”
Its rapid economic growth notwithstanding, Japan in the 1960s was a tightly controlled society, and Tora-san’s world was already being threatened. However, a lot of people were rooting for him. They saw in Tora-san someone who lived freely and honestly; a man full of humanity who embraced both happiness and sadness. Tora-san was a man of the people, and made them laugh with such lines as “Are you more stupid than me?”
After the last episode of the drama was aired, the TV station was flooded with complaints, and Yamada admitted he had not realised that Japanese society needed Tora-san. So he made a movie, which proved very popular and later became a long and successful series. “Unfortunately, today there are very few people like Tora-san,” Kikuchi says. “Nobody gets angry, especially in public. If you express anger and start yelling, you just get a frosty look of disapproval.”

Kikuchi then goes on to list some of the problems that marred Abe Shinzo’s cabinet: falsification of official documents by the Ministry of Finance over the Moritomo scandal; fraudulent government statistics; corruption cases related to the development of casinos in Japan, etc. “Every time a problem was discovered, politicians and bureaucrats kept lying and destroying incriminating documents while Abe apologized, but never considered resigning. And yet, the Abe Cabinet’s approval rating remained high.”
But why have the Japanese stopped getting angry? According to Kikuchi, one of the reasons is that the lessons the Japanese had learned from the war have been forgotten and are not discussed anymore at a national level. “Everyone knows the historical fact,” he says, “but the lesson that those in power can fail and their mistakes can lead to the death of millions of people has been forgotten.”
Another reason, according to Kikuchi, is what he calls the “unwritten rule” of the Heisei era. “Our generation, born in the Heisei years, has been forced to adapt to their social surroundings,” he says. “The Japanese value harmony, but there are times when we should put that aside and show our indignation, our anger. However, the younger generation, who were raised by such adults, grew up thinking that getting angry was not good. In today’s Japan, there’s an implicit understanding in social life that you should not expose your inner self unless you do it anonymously on the internet. Even the media have given up. The result is that Japan has become a ‘castrated’ society.”

This opinion is echoed in an essay that appeared in the Infinity Dream blog. The anonymous author of the article points out that “Torajiro is neither frightened by nor subservient to the power of authority. The truth is that he probably does not understand the nature of the power wielded by the authorities. In other words, Tora-jiro’s mental landscape is both narrow and very clear. In his mental landscape, there are people such as his sister Sakura, the good people who run the Toraya store, and all the people he meets on his trips. Whether they are common people, world-class authorities on ceramic art or famous writers, it makes no difference to him.”
This essay introduces an interesting idea first conceived by Yamagishi Toshio, a social psychologist: the concept of “yakuza-type commitment.”

Yamagishi studied the relationship between trust and commitment and came up with a theory of trust as a means of reducing social uncertainty. Organised crime syndicates such as the yakuza need “iron unity” not because they have a good relationship with one another but because they have to deal with attacks from the outside world. In other words, in a society full of social uncertainty, we need a fixed relationship that guarantees each other’s interests. In such a society, connections are effectively utilised by people from the same university or the same geographical area to maintain “in-group favouritism.” Therefore, the “yakuza-type commitment” is common not only to criminals but the entire Japanese community.

Tora-san often says he is a gangster and even dresses like one. After all, he is a tekiya, an itinerant merchant who travels around the country setting up portable stalls at markets and festivals. Historically speaking, the tekiya, along with the bakuto (gamblers), were predecessors of the modern yakuza. Tora-san, of course, is not a real gangster, but throughout the film series he is portrayed as someone who deviates from social customs and lacks the common sense that ordinary members of society have. His language (especially his angry outbursts) is probably the closest thing he shares with real yakuza.

This sort of outlaw nature is a trait that appeals to the Japanese, or at least appealed to the older generations in the 1960s and ’70s. As Yamada wrote in the Special Issue of Bungei Shunju in September 2004, “In the era of high economic growth everybody had a regular job and things were looking good, and yet a lot of men and women were crazy for Tora-san, a miserable man with a broken heart. It was a time when everybody was pushed to work harder, earn more money, and buy a washing machine and a TV. But I think there was something in Tora- san that Japanese people longed for. Even though they worked hard and saved money, they were bothered by a sense of loss, and I wonder if they were relieved by seeing Tora-san, someone who lived his life at his own pace without running after some impossible middle-class dream. For him, life was very simple. As long as he had a room to spend the night and a bottle of sake, he was satisfied.”

It is the eccentrics and weirdos who are the first to be sacrificed when the world is in recession. It is an efficient way to manage the world, but it results in a dull, homogeneous society. Also, those who are left are too afraid to raise their voices. They become yes-men who think only about not getting fired. But people like Tora-san are different. They add spice to everyday life and make the world better.