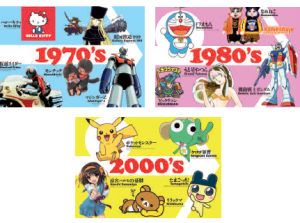 Until June 24th, at the SCVA, you can meet the characters who have been populating Japanese everyday life for the past fifty years.

Bye Bye Kitty!!! No, this is no joke. A little over a year ago, New York’s Japan Society was hosting an exhibition with that title. It united the cream of contemporary Japanese artists who reject kawaii (cute) culture embodied by the now famous Hello Kitty. Gladly provocative, the guest artists showed their work that breaks off the smooth aspect of the characters that stem from manga and video games. Japan is flooded with these characters that are used to communicate all kinds of messages. When tourism was on a downward slant, a specialised company was contacted to think up a character that would be declined in many forms in order to attract customers. In Kumamoto, on Kyûshû Island, a Kumamon was launched, a bear with a friendly face. He was elected best character of the year 2011, and allowed to reboost tourism and generate a 2,5 billion yen turnover (£192 millions) with by-products. Not as fun, but just as efficient, a few years ago a Japanese nuclear subsidiary that wanted to convince the population of its power stations’ legitimacy, invented the Plutokun character in 1991, whose mission was to carry a message. The day after the accident of Fukushima Daichi’s power plant, a few spirits of grief came back to remind how important these characters are in the Japanese society.
It is also what the Japan: Kingdom of Characters exhibition is about, at the Sainsbury Centre for Visual Arts until June 24th. Nevertheless, it is less critical. Indeed, supported by the Japan Foundation, an official organisation, this exhibition works for the promotion of what is called Cool Japan, meaning Japanese popular culture that is broadcasted via mangas and animation movies. So there isn’t much detachment from the phenomenon and its implications in Japanese society, although a few explanations are given. The idea is to build a non-exhaustive list, yet packed with as many possible characters from that “menagerie” that brings dreams to whole wide world. The main interests reside firstly in the temporal division, that shows the visitor that this phenomenon isn’t new, it has existed for over fifty years now. Secondly, in meeting a certain number of characters that are still unknown in the West. The Japanese are obviously very proud of this cultural heritage, it allows them to exist in the eyes of the rest of the world as they are practically absent from the international political scene. But what does it matter.
By going from one room to another, each lively coloured, the visitor discovers the icons of contemporary Japan. From Ultraman to Pokemon, Doraemon or even the eternal Hello Kitty, it’s on a journey through time that the Sainsbury Centre for Visual Arts welcomes you. And you end up understanding that obsession for these characters, why the Japanese can’t imagine living without them, and in a certain way, why we Westerners, end up falling for them. After visiting that exhibition, you will without doubt pay more attention to them, all the more if you’re not yet familiar with the universe of Cool Japan. All one can hope for next, is to have the pleasure of seeing the Bye Bye Kitty!!! exhibition some time, that hasn’t yet crossed the Atlantic.