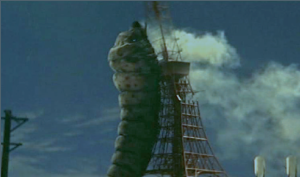 Film directors recognized the symbolic value of the Tokyo Tower and it was often used as a setting in their movies.

Film directors were right. They were quick to understand that the Tokyo Tower, symbol of the capital city as well as the whole country, had grown to be as famous and important as a movie star and should be taken advantage of. Just a few months after it’s inauguration, the new building was put to use as a setting for Tasogare no Tokyo Tawa [Tokyo Tower at Dawn], a romantic comedy by Abe Tsuyoshi, the story of a young woman’s first love after having moved to the city to work as a milliner. She arranges to meet her lover on the tower’s observation platform, from where she looks out with fascination over a city full of promise for the future. The tower used to command the best views of the city until skyscrapers grew up around it over the years. It is a common reference point in feature films and many directors also give it an important role in their movies. This is the case in quite a few special effects movies, which Toho films has specialized in since the 50s. Honda Ishiro, famous for his special effects, puts the tower to use at every opportunity. In 1961, he directed Mothra, in which a giant moth larva destroys part of the city after villains kidnap two little fairies. Of course, the Tokyo Tower pays the price for being in the way of the larva, which turns into a gigantic geometer moth that the army is incapable of crushing despite their many efforts. Using the tower is not a naive choice. In many of Honda’s movies in which destruction is key, he reduces highly symbolic locations to dust and ashes. In his first disaster movie, Godzilla (1954), the monster lays waste the parliament building. If the Tokyo Tower had already existed back then, Godzilla would obviously have loved to pulverise it. In 1973, novelist Komatsu Sakyo published Nihon Chinbotsu [Japan Sinks]. The same year, soon after it appeared in bookshops, Moritani Shiro adapted it into a movie. Tokyo is hit by a violent earthquake and its highest building, still Tokyo Tower at the time, is completely destroyed, leaving no doubt as to the outcome of the catastrophic disaster. In a way, the routine obliteration of the Tokyo Tower in all these movies involving the intervention of creatures and destructive natural events stands for the price Japan has to pay for its rapid development after the war. To many, the tower’s construction was the first step in an epic saga that led to the country’s prominence in the worldwide economy. Attacking this symbol of success was a way remembering the fragility of such a powerful position. The economic crisis that Japan has endured since the nineties, after the financial bubble burst, has radically changed people’s outlook on the Tokyo Tower. With fewer economic assets, Japan lost much of its pre-eminence. Since then, the tower has started to symbolize nostalgia. Always – San chome no yuhi [Sunset on Third Street], a great success in 2005, follows the lives of several families living in a modest area of the capital while construction work takes place on the tower in the background. It is not being destroyed – on the contrary, it is being built. The movie encourages the belief that the dynamism lost over the past twenty years will be regained and that the Tokyo Tower, once a beacon of Japanese growth, will again stand as its symbolic centre-point. But everybody knows that a page needs to be turned. That is what Matsuoka Joji suggests in his film, Tokyo tawa okan to boku to, tokidoki, oton [Tokyo Tower, Mom and Me and Sometimes Dad], which he adapted from Lily Franky’s eponymous novel. The sight of the tower represents the outcome of a mother’s life, someone who has sacrificed everything for her son. When she dies, the tower remains standing, but it has lost its soul.