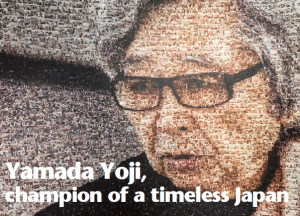 When I was young I thought that Ozu’s movies were boring,” confessed Yamada Yoji in January 2013. That year, the director released Tokyo Kazoku (Tokyo Family, 2013) in Japan, a remake of Tokyo Monogatari (Tokyo Story, 1953), in which he paid tribute to the Master of Ofuna, where Shochiku Studios were situated. He started work in 1954, writing scripts for Nomura Yoshitaro who, happy with their collaboration, helped him with his directing debut in1961 – Nikai no tanin (The Strangers Upstairs), a medium-length feature film in which many characteristic elements of his future work can be found: family, humour, and the daily lives of ordinary people, in complete contrast to Ozu’s films, which he considered to be “petit-bourgeois”. For this devoted admirer of Kurosawa Akira, whose films gave birth to new kinds of heroes, all products of their own time (such as Doctor Sanada in The Drunken Angel, Murakami the inspector in Stray Dog, or Watanabe the office manager in Live), the aim was not to follow the same path, but to experiment by exploring the lives of ordinary people. Although he never claimed any particular political involvement, even if he did occasionally support certain communist candidates, Yamada was always on the side of ordinary people. Shitamachi no taiyo (The Sunshine Girl, 1963), his first full-length feature film is an example of this.

He recounts the story of daily life in the poor quarters of Tokyo. Life isn’t always a bed of roses, but solidarity and pride prevail, helping the residents keep their heads above water. This film marked his first meeting with the young actress Baisho Chieko, with whom he would often work in later years. Shitamachi no taiyo was quite successful, as was its theme song sung by Baisho Chieko, which became one of the hits of the year. This encouraged Yamada to pursue his work. Even the titles of the films he subsequently made demonstrate his wish to stay close to the people. Words such as baka (fool), furaibo (tramp), futen (lazy) recur in his work throughout the sixties. Baka marudashi (The Honest Fool, 1964), or maybe even Natsukashii furaibo (The Loveable Tramp, 1966), anticipate his most popular work, Otoko wa tsuraiyo (It’s Tough Being a Man), a series that began in 1969. Made up of 49 episodes, the films came out twice a year and were part of every cinema-goer’s life until the death of the principal actor in 1996. Atsumi Kiyoshi played Tora-san, a character that became one of the most important in Japanese cinema, someone who was a bit lost, always ready to help out, lazy, and on the look out for the love of his life. “Tora-san embodies Japan,” Shochiku claimed in its publicity material. In a country that was undergoing rapid political and economic transformation – the late 1960s saw some violent student protests and the country rose to rank third in the world behind the United States and the Soviet Union – Torasan was a breath of fresh air. He represented the Tokyo of old, with which everyone could identify. Each film in the series was also an opportunity to discover a new part of Japan and its very own particular personality, but it was Tora-san’s love life that really interested people. This soft-hearted fellow invariably fell in love without ever managing to get the girl. Stars of the day played the female characters, affectionately called “madonnas”, and contributed to the popularity of the series. In a smart business move, Shochiku released an episode in May for Golden Week, when most Japanese people are on holiday, and again in December during the end of year celebrations. In total, nearly 80 million people watched Otoko wa tsuraiyo between 1969 and 1996, and that’s without counting the hundreds of thousands of television viewers around the country who can still watch Tora-san today. Yamada Yoji, who directed the whole of this series with the exception of two films, found a place in people’s hearts with his detailed observations of family relationships. The family, an essential element in society, was often the subject of his films. Shochiku Studios promoted them extensively, as well as Ozu Yasujiro, many of whose great films were made in Ofuna Studios and provided a benchmark for the genre. Yamada and Ozu who, according to the director of Otoko wa tsuraiyo only caught glimpses of each other when they were both working there, interpreted the subject very differently. All the same, a certain “Ofuna style” slowly developed, which also influenced Yamada Yoji in the end, so much so that the cinematographer Oba Hideo was heard saying that one could “observe the tradition in Yamada’s remarkable talent”.

What distinguishes Yamada from Ozu is that social failure doesn’t become a factor in the divisions or the deceptions at the heart of the family. Whereas Ozu points to this being the case, as in Hitori musuko (The Only Son, 1936) where the mother, played by Iida Choko, shares her regrets that her son is not living in the heart of the capital, or in Tokyo Story when the father, played by Ryu Chisu, expresses sadness that his son has to follow his career as a doctor far from the centre of Tokyo, Yamada Yoji offers a more straightforward vision. Kazoku (Where Spring Comes Late, 1970), released just after the third part of Tora-san’s adventures, is a perfect example. He describes, with disarming simplicity and a warmth that is absent in Ozu’s work, how a family settles down in the northern island of Hokkaido after moving from the south of Japan. This approach can also be found in a series of four films entitled Gakko (A Class to Remember), which he started filming in 1993. This time, he tackles the relationship between parent and child at a time when the Japanese school system – which is notoriously competitive – is being challenged. Once again, the filmmaker emphasised what brings people together rather than what tears them apart. His only full-length feature film that puts forward a completely contrasting point of view is Musuko (My Sons,1991), which Yamada thought of as his version of “Tokyo Story”. It deals with the complicated relationship between a father who lives in the countryside and his son who has moved to Tokyo after the death of his mother. This film is often considered by foreign critics to be one of Yamada’s best, and it owes this to its direct connection to the work of the Master of Ofuna. This conclusion is oversimplistic as it ignores the unique richness of the director’s work. Some might consider that Torasan is too “Japanese” and impossible to understand beyond the borders of the archipelago, but many of his others movies demonstrate the universality of his work. A sharp observer of the transformations of an industrial society, Yamada Yoji tackles social issues with great care, as in Furusato (Home from the Sea, 1972) that describes the harsh conditions on an island in the Inland Sea, or Harakara (The Village, 1975), set in a village in the northeast of the country where residents are trying to put on a musical. In Shiawase no kiiroi Hankachi (The Yellow Handkerchief, 1977), a road-movie filmed in Hokkaido with the late Takakura Ken and the ever-faithful Baisho Chieko, he looks into the issue of re-integration of former criminals. The movie became the subject of two remakes, the first in Thailand in 1981, and the second in America in 2008 by Udayan Prasad called The Yellow Handkerchief, with William Hurt. As the author of most of the film scripts, in collaboration notably with Asama Yoshitaka, Yamada Yoji understood how to create a certain style and unique atmosphere that made him one of the most admired filmmakers in Japan.

Though he chose not to fight against tradition, like those from the New Japanese Wave who started to make movies around the same time, he made a choice and succeeded in winning over Japanese cinema-goers. For example, he wrote the script to another very popular film series, which first appeared in 1988, adapted from the manga Tsuribaka nisshi (Fishing Fool’s Diary). With regular cast members Nishida Toshiyuki and the famous Mikuni Rentaro, this ode to friendship ended in 2009 after 22 successful episodes. Although Yamada Yoji is considered a great film director in Japan, he has had difficulty making a name for himself abroad. Besides Musuko, with its ties to Ozu’s work, he is known for his three samurai movies, jidaigeki as they are called in Japan, which he produced in the early 2000s: the Oscar nominated Tasogare seibei (The Twilight Samurai, 2002) with Sanada Hiroyuki and Miyazawa Rie, Katsushi ken: oni no tsume (The Hidden Blade, 2004) with Nagase Masatoshi, and lastly Bushi no ichibun (Love and Honour, 2006) with Kimura Takuya. This is paradoxical for a filmmaker who sets his work in contemporary society, nevertheless, these three feature films still focus on ordinary people. Yamada is not interested in heroes, but only in lowly swordsmen who have to take up arms in defence of their honour. All the same, people are starting to take notice. In 2010, the Berlin Film Festival having already selected Downtown Heroes (1988) for the competition, awarded him the Camera Prize for his lifetime work. Chiisai ouchi (The Little House, 2014) received a silver bear for its principal female lead, Kuroki Haru. This international recognition, even so late in his career, is well deserved, though in Japan he has never stopped winning awards. A museum in his honour was opened in December 2012 in Shibamata, the popular neighbourhood in Tokyo where Yamada Yoji had chosen to have his timeless hero, Tora-san, live out his days.