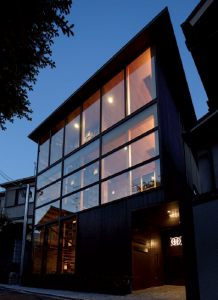 Manuel Tardits has lived in the archipelago for many years, and shares his fulfilling experiences as an architect there with us.

“Does the imagination grow weaker or stronger when it confronts reality ?” Victor Selagen

This quotation from the French writer Segalen, a specialist in orientalism, seems to capture admirably the destiny of a foreign architect in Japan. The aphorism not only describes the change of scenery that will be experienced, even today, when choosing to live in the Far East, but also how architecture is practiced there. What is an architect’s goal other than to find a harmonious balance between theory and aesthetics, and oversee their translation into the real world with all its petty constraints? My imagination, when confronted with the real Japan where I have lived, taught, built and written for more than 30 years, far from getting weaker, keeps on growing stronger as the days go by. I don’t remember precisely when I first thought of coming to Japan. That was in the early 80s, when I was thinking of getting more experience abroad after finishing my studies in Paris. Back then, I already enjoyed Japanese contemporary literature and cinema, but had limited knowledge of its architects. Two exhibitions in Paris, one on Ando Tadao and another on Shinohara Kazuo, both mostly about private homes, had a huge impact on me and encouraged me to leave. In the early 80s, Ando was becoming known for his concrete houses (a rather despised building material in France) that appeared austere, abstract and inward- looking, although this was nothing like the case for Shinohara. Despite the strange beauty of Shinohara’s houses – some with slopping floors, made of earth, with underground spaces, or bold formal collages – I did not understand them, although I did not doubt they that had a pertinence that passed me by, masked by their exoticism. My curiosity was piqued, and in other publications I discovered the post-modern and alluring work of Maki Fumihiko. I met him in 1986 when I was a Phd student on a scholarship, and then later as a masters student in the research laboratory he ran at Tokyo University. This was unusual for a French student, but fascinating for me as my interests lay as much in research as in the practical, especially as Maki encouraged his students to enter the many international competitions he was invited to participate in.

Besides these opportunities to engage in incredible projects with a fine master, I think I learnt two things: a love for making models and an open mind. Modelmaking – the art of precision, as I would call it – on which we spend many long hours in Japan, helps visualize and communicate ideas. As for an open mind, it became a habit and is mainly about not always considering one solution to be better than another. Indeed, before choosing a certain direction, Maki took into consideration every possibility and never came to a decision until it had been checked visually. My wife, Kamo Kiwako, and I completed our first projects at Célavi Associates, which we set up in the early 90s. The economic bubble led to an excess of construction work, but was also an opportunity for young architects to launch themselves. As well as other projects, we had the opportunity of working, over a period of ten years, on several stages of the renovation of the French- Japanese Institute in Tokyo. This building is emblematic of Japanese modernity after the Second World War and was designed by one of Le Corbusier’s famous disciples, Sakakura Junzo. It is a meeting between France and Japan, in which I discovered a number of “characteristics” of the franco-swiss architect that I had previously learned about while studying history books on modern architecture, and that I was now able to see with my own eyes. The next stage of my journey into Japan’s architecture started unexpectedly in 1995 when we formed the agency Mikan, and continues today. I work as a foursome with my colleagues in the practice: Sogabe Masashi, Takeuchi Masayoshi, and Kamo Kiwako. We are all graduates of TIT (Tokyo Institute of Technology) where one of the long time teachers was… Shinohara. As a team you need to take into account everyone’s ideas, especially if that team is to last in the long term, something that is more rare in Japan than people thane might think, especially in the creative arts where ego is king. Mikan started in 1995 so we could combine our skills in order to participate in a competition set up by NHK, with a view to building its new regional offices in Nagano for the Winter Olympic Games of 1998. The competition, which we won, was exceptional in that it was open to all kinds of architects.

Unfortunately, Japan is not the paradise for creators that Westerners often mistakenly think it is. The status of architects is not held in high esteem, and the large consultancies monopolize access to the larger building briefs. Architects who work here will one day find themselves confronted with the cliched idea of “Japaneseness”. Connected to the Japanism movement, the term was invented during the second half of the 19th century, and describes the original cultural shock when Japan and the West (re)discovered each other after two centuries of Japanese isolation. But the notion is skewed, even irritating. Sejima Kazuyo will tell you that she produces Japanese architecture because she is Japanese! No answer could be more to the point. An architect, whether Japanese or not, is an original creator first and foremost. Would you ask a French architect what makes his architecture French? Surely not. For us – for me – above all, it is about finding an appropriate response in a particular cultural, historical and physical context. It is all about which references, materials, proportions and technologies to choose. We pay attention to the direction the wind blows, to the afternoon sun, to the trees, to the seasons as well, but also to function and to the neighbours, to the sound of cicadas as much as to the rumble of the motorway. As creators we are as multisided and complex as all places and people. Once we drew up the plans for a temporary tea pavilion and then built up a sweat alongside some young carpenters, in order to construct it with our own bare hands. It was inspired by the well-known Joan built by Oda Uraku in 1618, set in the mountains above Kobe. More recently we built a new centre for the Far East French School in Kyoto, with a timber structure based on traditional measures of ken/ma, all the while adhering to today’s standards of economy and sustainability. We also build houses and schools in Tokyo entirely from in concrete and steel. All this makes up our Japanese identity.

In the physical context, you cannot forget the city, as Japan is one of the most urbanized countries in the world and Tokyo the largest metropolis on the planet, with 37 million inhabitants. Even if Shinohara’s architecture intrigued me, while leaving me to guess at its elusive logic, I could not accept that this city, my city, so chaotic in appearance, should be devoid of such logic. This beautiful quote from Georges Perec continues to strike a chord within me: “ There is nothing inhuman in a city, other than one’s own humanity”. I wrote the book “Tokyo, Portraits and Fictions” (Le Gac Press, 2001) as the culmination of this interest in the urban, alongside what I have observed on numerous work sites and while travelling and moving house, backed up by my long and careful research. Maki, my old master, paid me a very perceptive compliment: “I’m very pleased that you did not try to draw an obvious conclusion from your research,” he told me. To express oneself with clarity, without affirming anything with certainty; to leave the question open ended. Maki has strengthened my belief in creative doubt, or perhaps in the case of an architect that would be “constructive doubt”!