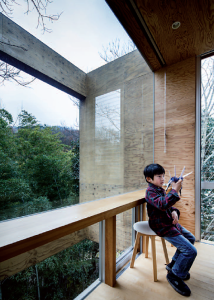 Maeda Keisuke champions the ideal of architecture working in harmony with the surrounding landscape.

UID (an acronym for Universal Innovative Design) was founded by architect Maeda Keisuke 12 years ago. His first project – a private residence – won a prestigious Good Design Award from the Japanese government. Since then, this studio, based in Fukuyama in Hiroshima prefecture, has received a lot of praise for its approach to architectural design, which is both contemporary and rooted in historic Japanese architecture and its focus on integration with the landscape. “The Western idea of architecture is to shield the space with walls and floors, while Japanese architecture connects to nature,” Maeda says. Like a lot of contemporary Japanese architecture, his geometric shapes fit perfectly into the natural environment as part of it, creating poetic spaces where people can interact with the surrounding landscape. Each one of Maeda’s projects starts with a careful investigation of the topological features of the area and the local flora and fauna, in order to create a natural relationship between the building and its environment. This relationship is defined by the fact that both exist simultaneously. “Rather than connecting the two simply by opening a window in a wall, I think about how to create a structure that exists as one landscape element within the indivisible whole of the environment,” he says.

In this sense, the interior functions not as a space cut off from the land by walls, but as an extension of the outside; a living space linked indivisibly to the earth. Whenever Maeda tackles a new project he values his own intuition. “Architecture is about creating an environment in a certain place, and that’s not something you can do just by drawing up a blueprint,” he says. “The blueprint serves as my basic guide, but I also remain aware of the unique characteristics of the place and value the intuitive decisions I make as I work, because those decisions are what ultimately lead to the creation of a comfortable environment. What I mean by “intuitive decisions”, for instance, are the on-site adjustments to shape and dimensions that I might make to a nursery school approach as I imagine the various scenarios that will take place there: the children and teachers and pregnant women who will use it, the people pushing baby carriages or carrying children, the parents walking along holding hands with their child, the caretakers coming to pick up and drop off kids”. “What I’m aiming for is not to maximize the convenience and functionality of the space, but rather to create an environment that fills people with a sense of wellbeing and comfort in the casual, everyday moments of their life”. The studio’s close collaboration with contractors and factories is an important part of this process, as it allows Maeda and his team to achieve a high level of precision and expression that in turn is the key to creating a sense of continuity between the exterior and interior spaces. An outstanding example of this approach is +node, a family residence whose upper level terminates in a dramatic cantilever that hovers 10 metres above the ground and is pierced at the end to allow a tree to grow up through the structure. Many of Maeda’s homes are the product of the overlapping and integration of two levels, one consisting of the cement forming the base of the home and another created from the wood above it, such as the floor and the external walls that act as a bridge to their natural surroundings. In the end, Maeda’s main preoccupation is how best to organize space and reach the optimal balance between function, nature and human relationships.