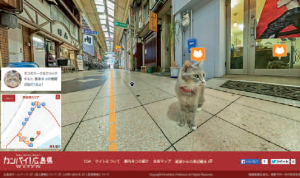 To attract more tourists, the local council has invited Lala the cat to help visitors discover the town from a new angle.

The small port town of Onomichi, 70 kilometres to the east of the city of Hiroshima, has long been known for its cats. Locals even refer to it as “the town of cats and hills”. You see the famous felines everywhere, prowling the temple precincts or lounging around the labyrinth of back alleys that honeycomb the town. From the splendid Senkoji Temple which overlooks the town from the top of Mt Senkoji, down the twisty boulder-strewn route known as the Path of Literature, along the historic Temple Walk and down into the jumble of old streets around the port area, Onomichi abounds in narrow alleys and pathways, making it ideal cat territory. One charming backstreet corner of intimate cafes and art galleries is even known as Cat Alley, after the hordes of moggies that love to loll around there. Onomichi also boasts a museum dedicated to Maneki-neko, those cute little cat figures found in restaurants that beckon with one paw and are supposed to bring good fortune and wealth. So it didn’t seem so far-fetched when the creative people at Hiroshima Prefecture Tourist Division hit on the idea of launching an interactive online cat’s-eye-view map of Onomichi as a way of attracting tourists to the town. Little did they suspect just how much attention the map would get. In its first two weeks, the now world-famous map went viral, with the website getting an astounding 1,700,000 views.

The story rebounded around the world, reported by all the major news providers, including CNN, Huffington Post, the Wall Street Journal and Business Insider. “We didn’t expect overseas media to cover it,” says a surprised Maiko Awane of Hiroshima Prefecture Tourist Division. “Our objective was to introduce the tourist destinations of Hiroshima Prefecture from a slightly different perspective. We decided to introduce these locations from a cat’s viewpoint, as they are usually well-acquainted with back alleys and the various other kinds of hidden charms of out town’s tourist destinations”. The map – which Hiroshima Tourist Board claims is a world first – is seen through the green eyes of Lala, a lovable little kitty whom the board have given the title “Manager of Backstreet Tourism”. To replicate the cat’s eye perspective, the map makers used a 360-degree camera similar to those used for the street view maps created by Google, except that the Onomichi camera was attached to a stick that travels at a cat-like 20 cm above the ground. You’ll find similar features to those employed on other interactive online maps, such as info on local shops and images of street scenes depicting local life, all seen from a cat’s-eyelevel. Lala helpfully provides some cat comments about the tourist attractions of her choice along the way. The map also introduces you to some other local cats, with links to information about their backgrounds. Even if you don’t particularly consider yourself a cat lover, it’s fascinating just to see the town from such an unusual angle. There is something irresistibly enticing about being shown round a town’s intimate nooks and crannies that we humans, caught up in our daily rush, would normally overlook.

It really does give you a new perspective on the world around you. In short, what Lala offers is an invitation to slow tourism. Moreover, the map helps us to empathize with the existence of our little friends in the animal world that share our city space. At the moment this map, officially known as the Cat Street View project, is only available in Japanese, which makes its success even more remarkable, but the unprecedented interest from around the world has prompted the authorities to rethink their plan. “We will certainly consider putting up an English version in the future,” says Awane. So far the map covers just a couple of streets, starting at Onomichi Hondori, the long and colourful undercover shopping arcade that stretches from the statue of early 20th century writer and Onomichi resident Fumiko Hayashi next to the station, into the town centre where you can find some of the town’s renowned ramen restaurants. The Tourist Board plan to start expanding the map to other streets and alleys as early as October, in the hope of introducing more tourists and cat lovers alike to the city’s hidden charms. Onomichi’s many cat connections made it the obvious choice for Hiroshima’s first online map, but Awane admits that part of the inspiration also stemmed from the recent surge in the popularity of cat-themed computer games like Nekoatsume. “We were indeed influenced by the Neko Atsume game, cat cafes, cat picture collections and a number of recent Japanese cat games,” she says. It seems that the Japanese have a special affection for cats that borders on reverence. “We would like to make this entertaining project available to all cat lovers, and so entice them to come and visit Hiroshima” she adds. Awane also confirmed that they are considering giving the cat map treatment to other towns in the area. After all, fishing is a major activity along the many miles of Hiroshima Prefecture’s coastline and its maze of misty islands, so wherever you go, a population of contented cats is never far away. The map is part of the prefecture’s “Kanpai! Hiroshima — Look! — Eat! — Drink!” tourism campaign which began in June 2015. “The tourism guidebook we released became a hot topic,” says Awane, announcing that “In the future, we will digitize this guidebook”. With the unexpected success of the Cat Street View project, Hiroshima looks set to become Cool Japan’s next hot spot.