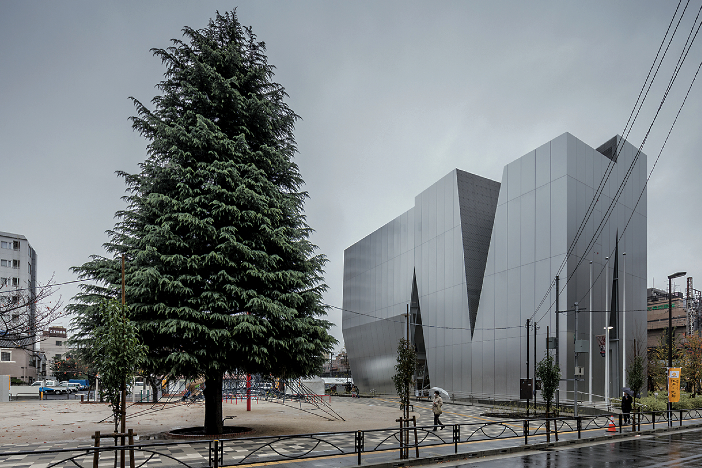 The design of the new Tokyo Museum was entrusted to Sejima Kazuyo.

Open to the public since November the 22nd, the new Hokusai museum welcomed Zoom Japan for an exclusive visit.

The Sumida Hokusai Museum opened its doors on November the 22nd, in a popular neighbourhood of Tokyo. Located close to the JR Ryogoku station and Ryogoku underground station, and only a few minutes away from the National Sumo Stadium (Kokugikan) and the Edo-Tokyo museum, the Hokusai Museum was built in a very quiet part of the capital, close to where the famous artist was born. After several years of discussion, this museum, built on three floors overlooking a small public garden, finally saw the light of day, ready to host visitors from across the world and celebrate this painter whose reputation has reached far beyond the borders of the Japanese archipelago.

Sejima Kazuyo was entrusted with the museum design project. The many buildings this renowned architect has overseen include the Kanazawa Museum and Louvre-Lens Museum (designed in collaboration with associate Nishizawa Ryue), and have always been impressive. The Hokusai Museum is no exception. Made up of different geometric shapes covered with aluminium panels, the Museum offers a strikingly white, uncluttered profile which reflects the sun like a mirror. It reveals nothing about its interior architecture.

When entering the museum, with its immaculate white walls and light-brown parquet floor, the visitor is instantly surprised by how much light there is. The reception area is on the ground floor, consisting of a conference room, a library and the museum shop. The basement rooms are used for meetings and archive storage. The tour starts on the 3rd floor housing the permanent exhibition, a place for education and entertainment where the masters life and principal works are presented with the help of reproductions. In this room, with walls painted black to highlight the colours of the prints, the floor is crisscrossed with streaks of light, conjuring up the flowing waters of the Sumida River.

Hokusai awaits us here, together with his daughter Oei, whose name as an artist was Oi, in the guise of two animated wax models depicted painting with brushes in their humble home. This scene illustrates the simplicity of Hokusai’s way of life. He was an artist who dedicated his existence to drawing and painting and hoped to achieve the perfect brush stroke, as he wrote in his famous postscript to One hundred views of Mount Fuji (1834): “From the age of six, I had a passion for copying the form of things and since the age of fifty I have published many drawings, yet of all I drew by my seventieth year there is nothing worth taking into account. At seventy-three years I partly understood the structure of animals, birds, insects and fishes, and the life of grasses and plants. And so, at eighty-six I shall progress further; at ninety I shall even further penetrate their secret meaning, and by one hundred I shall perhaps truly have reached the level of the marvellous and divine. When I am one hundred and ten, each dot, each line will possess a life of its own. My wish would be that those who survive me witness the truth of what I have written”. This passage is signed “Manji, the Old Man who is mad about art”. Numerous touch screens offer information about each of the pieces on display, as well as interactive puzzles and word association games, not to mention Hokusai’s most famous Manga. This piece of art is not a “manga” as we would think of one today, and does not recount any stories. It’s a manual for his pupils and all those who would like to learn to draw. This collection of fifteen notebooks containing drawings, in which the artist dealt with all different kinds of subjects: fauna, flora, architecture, western perspectives, the supernatural, human behaviour, different trades etc., was first published in 1814. It was a great success and was reprinted many times, with the last volume being published after the artist’s death. 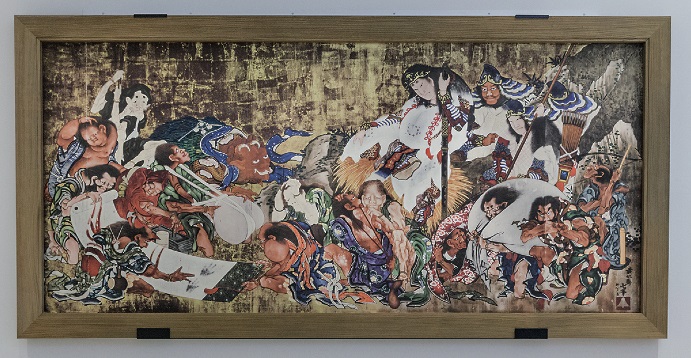 The museum officials have gone to great lengths to make information about the works accessible to as many people as possible.

On leaving the exhibition room, the bright foyer on the third floor has a panoramic view of the Sky Tree, Tokyo’s new 634 metre high skyscraper that is located close to the museum. From here you can access the first room of the temporary display. The other rooms on the second floor are also all dedicated to temporary exhibitions, of which the Sumida Hokusai Museum is planning to host several every year.

There are benches available on each floor for visitors to rest before continuing with their visit. The 1,500 works that make up the museum’s collection come from the legacy left by history of art specialist Narazaki Muneshige (1904-2001), 600 works of art from the former collection of art collector Peter Morse (1935-1993), as well as many paintings and prints acquired by the Sumida District even before the museum’s first brick was laid. The museum will not only display its own collection but will continue to add to it with pieces from other Japanese and foreign museums. To celebrate its grand opening, some 120 works by Katsushika Hokusai, including some of his most famous prints, paintings, surimono (luxurious prints that were not intended for sale) and illustrated books, as well as a 7-metre long emaki scroll (Panoramic Views along the Sumida River) were carefully chosen and displayed. This emaki used to be owned by the art dealer Hayashi Tadamasa (1853-1906), an acquaintance and adviser to those who were fascinated with Japanese culture, especially Edmond de Goncourt whom he helped write a monograph dedicated to Hokusai, published under the title Hokusai in 1896. It was showcased in 1902, in the sale catalogue for the Hayashi collection of Objects d’art from Japan and China. No one knew what became of the emaki for a period after that, but it was rediscovered last year in Europe, returned to its hometown, and is now in the Sumida Hokusai Museum’s collection.

In the first section, this temporary exhibition illustrates the life of the painter and displays portraits of Hokusai by himself and by other artists. The second section takes us back to life in Sumida in the Edo era. The illuminated scroll “A Panoramic View of the Sumida River” forms the centrepiece and is Hokusai’s most famous achievement. In it he uses the chiaroscuro technique to paint the two streams and the main river from the Ryogoku bridge to the Sanya canal (Sanyabori).

The left bank of the Sumida, prized by intellectuals and scholars, was covered in luxuriant vegetation. The blossom of the cherry trees in spring, the ochre and vermillion of the maple trees in autumn and the snowy landscape in winter filled everyone with joy. It was also the ideal location to admire the fireworks which entranced the crowds each summer. A weary traveller could even find shelter in one of the many temples or shrines in the neighbourhood. The right bank was dedicated to entertainment, curiosity shows, inns and teahouses. Using the Sanya canal, men also travelled by boat to visit houses of ill-repute in the pleasure district, Shin Yoshiwara.

This first exhibition was put together to present not only the surimono (embossed and finely gilded woodblock prints, an art in which Hokusai was particularly skilled), but also paintings and drawings, including those from the Thirty-six Views of Mount Fuji series which had a profound impact and great influence on Western artists over the second half of the 19th century.

Although he did not reach his hundred and tenth birthday as he had so wanted, Hokusai nonetheless left a considerable wealth of work, which still continues to inspire craftsmen and artists around the world today. The Sumida Hokusai Museum will certainly become a favourite with Japanese and foreign visitors alike.