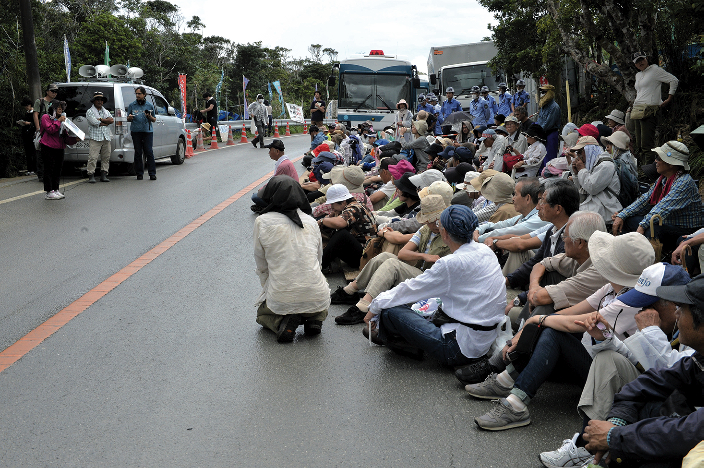 Despite the challenges, residents peacefully demonstrate to stop the work continuing.

For many years, residents have opposed the American bases and their expansion here. All their attempts have been in vain so far.

As a Buddhist drum sounds, everyone sits down as though participating in a ritual. Around twenty protesters silently take their seats on planks of wood to block the passage of the trucks heading to the N1 construction site in Takae. On either side of the road the lush Yanbaru forest is still bathed in the morning mist. In this lost paradise to the north of Okinawa, plans are in motion to build six helipads as part of the new Henoko military base, the most important American base in East Asia. Members of the riot police unit, the “kidotai”, take up their positions as well, an air of wariness on their faces as it starts to rain.

However, the protestor’s determination has already been tested many times. For twenty years they have been at the forefront of opposition to the Heneko project, and for the last ten they have regularly blockaded the road to Takae. Their territory is clearly marked by a large tent, which serves both as shelter and office. Here are displayed newspaper clippings depicting the history of the Battle of Okinawa, which decimated a quarter of the population in 1945. Administrated until 1972 as an American colony, this archipelago located 2,000 kilometres from Tokyo served as a base during the Vietnam War. Today, Okinawa is still home to 75% of the American Forces in Japan since 1945, totaling about 30,000 soldiers. Although it is considered to be an unlawful occupation by local residents, who denounce the crimes, incidents and noise they have endured for 70 years, the Abe government seeks to strengthen the military presence “in the face of the growing threat from China and North Korea”. 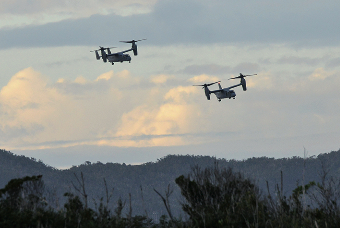 The Osprey hybrid aircraft built by Boeing is at the heart of the controversy.

Nakayama Yoshito takes the microphone. Like many protestors, he’s not a native of the island but came to lend a hand in Takae, the neighbouring village of around 150 inhabitants. “The media manipulated by the far right are trying to convince everyone that we are paid by the communists to be here – we must not give them any reasons to believe this! No violence — we are here to protest peacefully to delay the work!” he reminds them, before handing out boots and umbrellas. The group of protesters, which include many elderly people, remain seated while brandishing their posters with demands calling for peace and the departure of the “occupation force”. Everything seems to take place in the usual Japanese way, smoothly and without fuss. Then, suddenly, the offensive is launched. A hundred kidotai disembarkfrom buses and then proceed to systematically remove the protestors. “Kidotai! You have no right to drive us out!” shout some as they struggle to remain in place, whereas others let themselves be removed. The fight resembles a scene from a play that has been rehearsed a thousand times, and is filmed both by a policeman and someone from the demonstration in case either side might need to defend their rights if an incident leads to litigation. Several demonstrators have previously been arrested, including the emblematic leader of the Peace Action Centre in Okinawa, Yamashiro Hiroji, known to the police since 1993 for having repeatedly broken into US bases. “Kidotai, don’t touch them! You perverts! Stop the sexual harassment!” shouts one of its representatives through the megaphone. The tone of the exchanges has changed radically since April 2016, following the rape and murder of a young woman by a former marine based in Kadena, which led to a protest demonstration of 65,000 people in Naha, the main city of the Ryukyu archipelago. Around 3,000 crimes have been attributed to the GIs since the base first became operational, the most infamous of which was the rape of a 12 year old girl by three marines in 1995, that led to the SACO (Special Action Committee on Okinawa) agreement between Tokyo and Washington to transfer the Futenma base to Henoko in the south of the island in order to “lighten the burden for the local residents”. 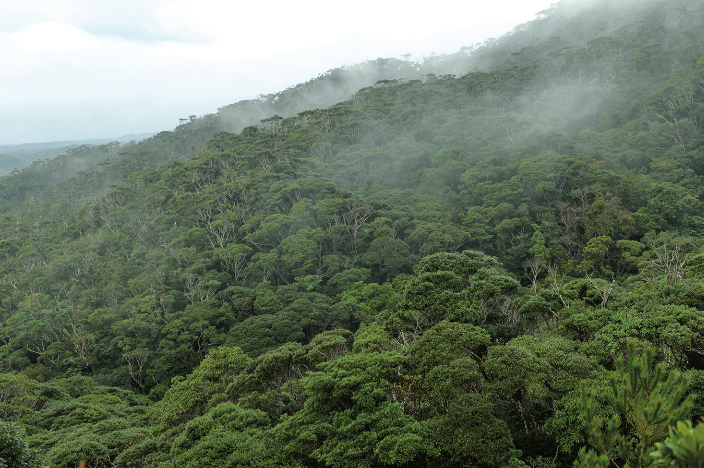 Yanbaru forest could be listed by UNESCO as a World Heritage site. 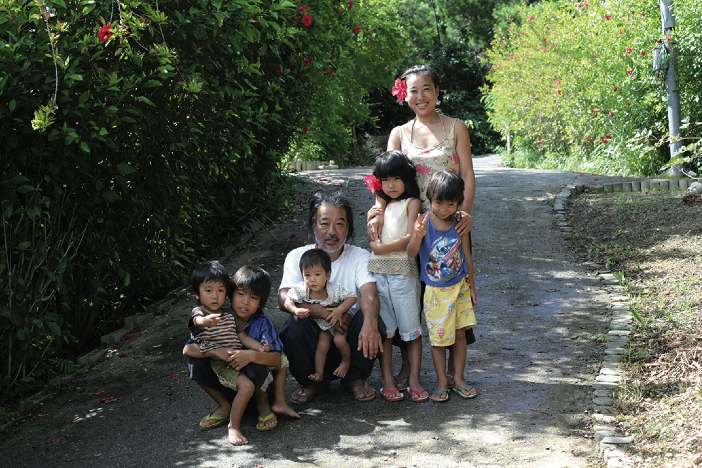 According to a recent study, children are particularly vulnerable to the sound of US aircraft flights.

According to a recent study, children are particularly vulnerable to the sound of US aircraft flights.[/caption]However, the transfer quickly revealed itself to be a diversion aimed at extending military bases to the north, including the construction of six helipads in the Yanbaru Forest. As the construction lorries arrive, demonstrators and riot police face each other in a stand-off where the resentment between Tokyo and Okinawa is palpable. In the absence of a spokesperson from the American Army, the battle is played out between these rival Japanese factions. A few months ago, two riot policemen from Osaka insulted demonstrators by calling them “bums” and “Chinamen”. The scandal led to their dismissal, but also to reinforcements of around 300 officers being sent to contain the few dozen protesters present on the N1 site. “Aren’t you ashamed of doing such a job,” Taira Keiko lambasts them with the full force of her 83 years. She’s a survivor of the Tsushima-maru, a freighter attacked by a submarine in 1944 while evacuating hundreds of school children from Okinawa. The riot officer in front of her looks on impassively from behind his mask. They don’t know each other, but each represents the enemy in the other’s eyes. With a distinctive language and culture, the inhabitants of Okinawa have long been victims of discrimination due to their historical ties to China. In the dark hours before Japan’s surrender, whole families were driven to commit suicide by the forces of the Imperial Army, and seventy years later the wound is still open. “I’ve come to protect Yanbaru forest and to continue living in peace,” affirms this elderly lady.

The Yanbaru region extends for about 760km to the north of the city of Nago. This dense forest covered with “broccoli” shaped trees formed a feudal domain in the heart of the Ryuku Kingdom, which extended over a thousand kilometres into the seas around China before it was invaded by Japan and then later annexed in 1868. It houses Yanburu National Park, but since 1958 has also been the site of largest training camp for the Okinawa based US Marines, with about 7,800 hectares given over to a “jungle training zone”. It was here that GIs were trained before being sent to fight in Vietnam. “There are no fences, American soldiers jog along the road carrying their rifles while schoolchildren pass by, shouting: Kill! Kill! Kill!” protests Ashimine Gen, a resident based on the other side of the N4 site where two of the six contested helipads have been built already. In 1999 an American helicopter crashed in the proximity of Takae’s Elementary School, provoking the angry residents into organizing a sit-in to stop the work on the helipads. Since 1984 twenty-two landing strips have been built in Yanbaru, but the opposition to them has not lessened. A lover of nature, Gen built a wonderful wooden house with his own hands in the middle of the jungle, where he could live peacefully with his wife and six children. 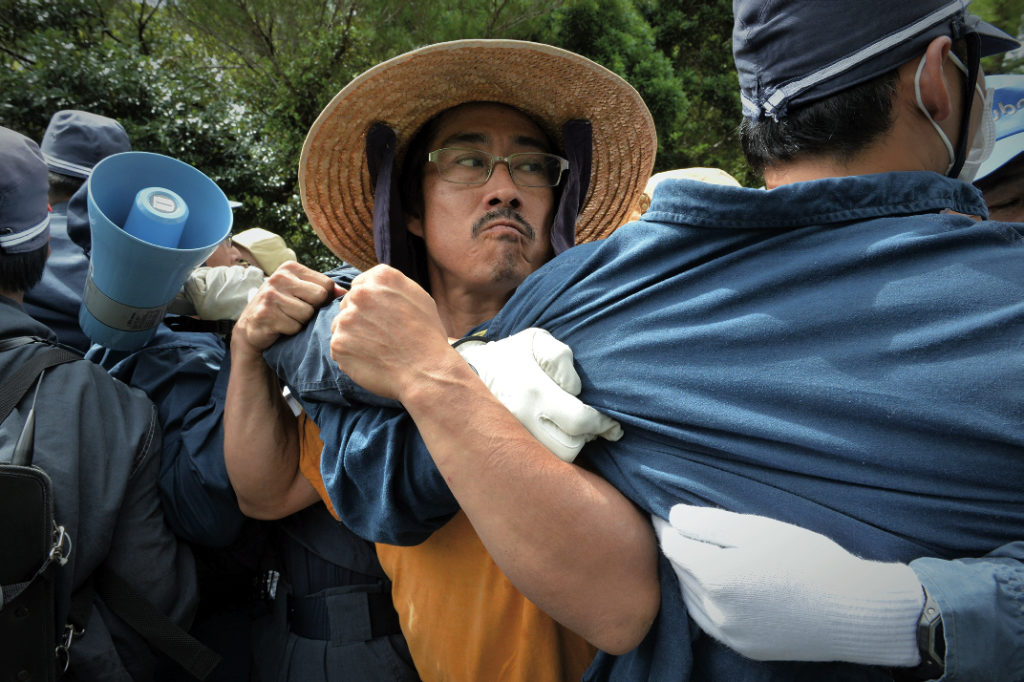 tension between police and protesters has intensified in recent months, with an increase in arrests.

Outside, you can hear the river and birds singing. However, as we admire the tranquility, suddenly the house starts to shake, and from the veranda three Ospreys – Boeing’s 20 tonne hybrid helicopter/ transport planes used for military refuelling – can be seen and felt flying over the jungle. It’s like a flashback to Apocalypse Now. “The noise became so unbearable that my wife decided to leave and take the children. They couldn’t sleep anymore,” says Gen. According to a survey carried out in 2016 by the local newspaper, Ryuku Shimpo, 77% of the children in the Higashi son area that includes Takae have been greatly disturbed by the overflights, with a further 28% being frightened by them. For the Ashimine family, who were planning to open an eco lodge, helipads have become synonymous with exile. “Since last June, the frequency of flights has intensified. They fly at low altitude until 11pm. If there are six helipads for Ospreys in the area, it will be quite unbearable,” explains Gens wife Yunike, who left remote Shimane Prefecture to settle here. Okinawa embodies a kind of paradise for many Japanese from Honshu who are exhausted by by city life. However, many of them did not imagine that living alongside the American bases would be so stressful. Ishihara Takeshi left Tokyo to open a rock bar near Naha and then decided to settle in Takae with all his family.

“It was 2006. The place was beautiful, with waterfalls, rivers. A few months later, in the newspaper, we learned about the project to build helipads! At first, I didn’t take much notice. Then I realised that if I didn’t fight, it was I who would have to leave,” he recalls. As an organizer of music festivals for peace in Heneko and then in Takae in 2012, attracting artists such as UA and Shingo 2, he was one of the most active demonstrators against the N1 site. “We were able to delay the work for ten years, but now, rather than demonstrations, it is legal channels that are our only hope,” he laments.

Ishihara is one of the 31 members of the Takae Residents Association against Helipads, who demanded that construction work should stop at a court hearing in Naha last October. “We called for a pollution and noise impact assessment study by the the Ministry of Defence,” he explains. In the absence of reliable studies provided by the authorities, the residents have called on academic experts to calculate and record the low frequencies of 100 decibels for a group flight of three Ospreys: loud enough to have an impact on health. “We are doing everything in our power to demand that the central authorities obtain guarantees from the American military to reduce the frequency of Osprey flights, especially at night,” promises Seikyu Iju, the mayor of Higashi son. However, all of his attempts at appeasing residents come to nought each time a new incident occurs. In December 2016 an Osprey crash occurred off the coast of Henoko. There were no casualties but it reignited the debate about aircraft safety with even greater intensity. The present Marine Corps Air Station at Futenma was built in the heart of Ginowan, a city with a population of 94,000 people, and has been recognized as the most dangerous base in the world. On the 22nd of December in Naha, at the ceremony to celebrate the end of the construction of the six helipads, relations between Tokyo and Washington remained strained. As a peace offering, the United States officially returned 4,000 hectares of training area to the jungle following the SACO agreement. However, this gesture has pleased nobody in Takae. “Once the trees have been felled, the whole ecosystem is disrupted. We can only hope that the forest has the means to regenerate,” explains Miyagi Akino, an entomologist who studies the indigenous butterflies of Yanbaru. The forest hosts 24 different endangered species, and is one of the places in Amami-Ryuku that could be listed as a Unesco World Heritage site. Alas, with the construction of six helipads in this protected area, each measuring 75 metres in diameter, a listing is now very unlikely. Like an echo, the peace is shattered as three more Ospreys shriek past.