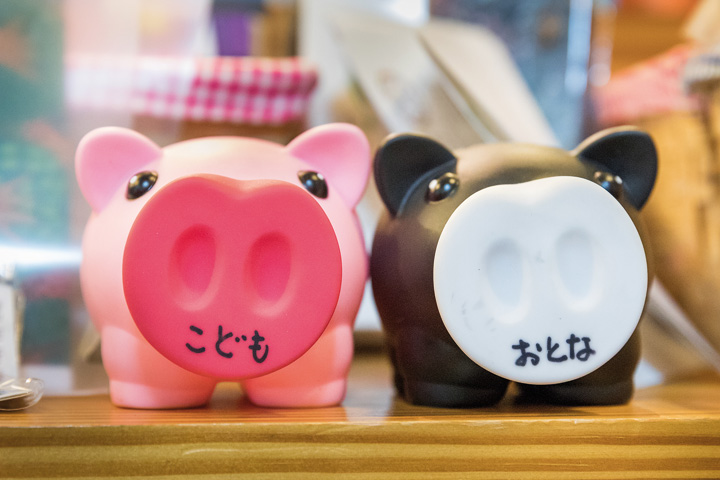 Piggy banks by the exit of the Dandan cafeteria, where children (on the left) and adults (on the right) pay for their meals.

The deep wounds inflicted by twentyfive years of economic crisis in Japan will be very difficult to heal.

Exactly 40 years ago the Japanese government commissioned a survey to find out what their citizens thought of their lives. It revealed that 90.5% of those questioned considered that they were middle-class (churyu). This almost unanimous response gave rise to the expression Ichioku sochuryu, which could be translated as “these approximately 100 million members of the middle-class”. In other words, despite the existence of social differences — naturally, the population was made up of both rich and poor — the Japanese felt that they lived in a country where poverty was not a permanent state of being, because society offered them enough opportunities to improve their situation. Society functioned in such a way that it tended to conceal inequalities. Businesses, especially the larger ones, offered jobs for life with regular promotion and pay rises, thus guaranteeing one way of climbing the social ladder. So there was almost no reason not to be optimistic and consider your neighbour to be your equal. Certainly, there were some black spots such as the notorious district of San’ya, in Tokyo, where the urban under-class was concentrated. But, at that time, when the majority of the population felt they were middle-class, it was easy to disregard this place, which was home for up to 20,000 unskilled day labourers.

Forty years later, another expression saw the light of day. It still lacks the notoriety of the 1977 expression, but it could be in use for some time to come if the present situation lasts much longer. It was coined by Amamiya Karin (see pp. 5-6), the former punk-rock singer turned militant social activist, for her book published in early 2017: Ichioku sohinkon jidai. Translated literally as “The era of some 100 million who live in poverty”, it obviously echoes “the approximately 100 million members of the middle-class” of the 1970s, and illustrates the country’s change in perspective. The time for optimism has come to an end, and is replaced by pessimism. The crisis following the bursting of the economic bubble at the end of the 1980s played a part in this change. The collapse of the Japanese system of business management encouraged the emergence of a society where poverty and instability gained ground. According to the Ministry of General Affairs, between 2007 and 2016, the number of insecure short-term contracts rose by 2.8 million, while during the same period, permanent contracts were cut by 850,000. These figures not only engender a feeling of insecurity, they are accompanied by economic and social consequences. There’s an obvious increase in poverty across the archipelago, the scale of which is difficult to determine. It definitely exists and is a burden on the country, whatever one says about it. Measures undertaken by the Abe government since 2012 to boost the economy have certainly helped to increase growth, but do not appear to have benefitted the general population, which remains marginalized as illustrated by the Bank of Japan’s impossible objective of 2 % inflation, whose target date it delays year after year. The idea of living in a society that is increasingly insecure and impoverished encourages a feeling of exclusion among Japanese people. So there’s much to do to recreate the conditions where, once again, the overwhelming majority of the population can dream of a bright and prosperous future.

No55 [CHALLENGE] The fighter against poverty

No42 [Adventure] Three men on a bike

No39 [Future] Hopes for a horizontal revolution

No37 [Experience] How to negotiate the bends in life