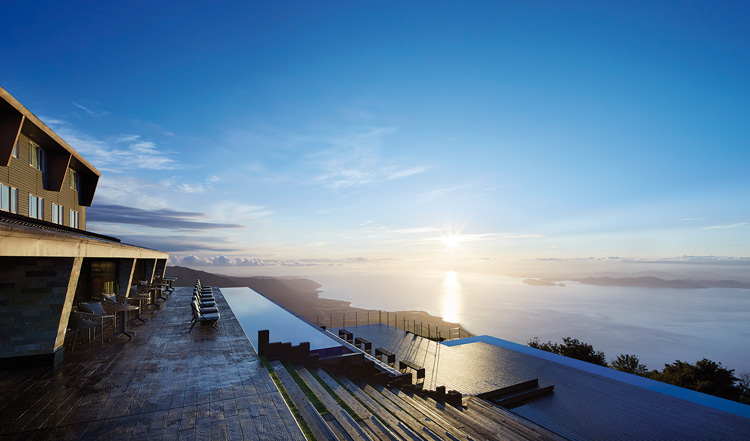 For an uninterrupted view over Lake Biwa, just go to Biwako Terrace.

Avoid the suffocating crowds of tourists in Kyoto, by visiting this lakeside city ten minutes away from the former capital.

oh Kyoto! With its temples, shrines, history and… its tourists. The former Imperial capital city has become a symbol of the mass tourism fuelled by foreign visitors to Japan, which the authorities congratulate themselves on having achieved. Situated on what tour operators have baptized the “Golden Road”, the city is a victim of its own success, and in some areas there are more tourists than Japanese creating all the hubbub and noise. If by any chance the sun starts to shine, the shops hiring out kimonos become filled and within minutes, the streets in certain districts are swarming with hundreds of kimonos, the quality and colour of some leaving a lot to be desired. This is in complete contrast to the delight of those charming encounters in the past with Japanese women dressed in their finest outfits. In short, mass tourism is suffocating Kyoto to the point of killing it off.

If you, too, are searching for authenticity, history, temples and shrines in rich and varied surroundings, all you have to do is take a ten minute train ride from Kyoto to get to Otsu which, despite its proximity to the prestigious historic city, has managed to preserve its own strong identity. It’s the perfect alternative for those who want to discover, rather than just “do” Japan while taking selfies in front of monuments. As the city is situated on the shores of Lake Biwa, one of the three oldest lakes on earth, it, too, has a long and ancient history as the temples of Ishiyama-dera et Enryaku-ji testify.

The first of these (10 minutes away from Ishiyama-dera Station on the Keihan line) has been situated by the River Seta since the year 747, a geographic location that has been a source of inspiration for numerous poets and writers over the centuries. This was where Murasaki Shikibu wrote The Tale of Genji (Penguin Classics, 2003), the very first novel in the history of the world. Once you’ve entered this sacred place, it’s difficult to escape the presence of this woman who left an indelible mark on world literature. Inside the Hondo (main hall), a National Treasure and the oldest building in Shiga Prefecture, you can see the small room (Genji no ma) where the young woman meditated and worked while writing her novel. In the past, women were not allowed to enter temples, however, Ishiyama-dera allowed them in for demographic reasons; you can still see the rock where women waiting to give birth would come to sit to seek divine protection for their pregnancies. The temple, surrounded by a vast treefilled park, is a beautiful sight in spring and autumn, and it’s worth taking the time to wander around in search of Murasaki Shikibu’s statue, which depicts her writing her masterpiece. 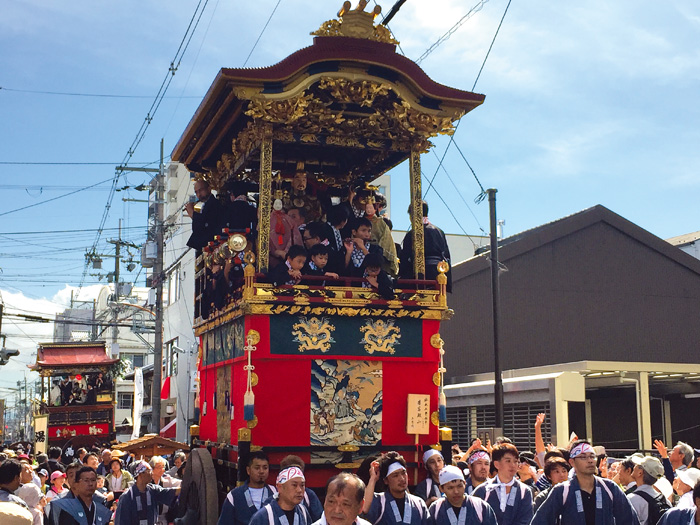 Otsu Festival (Otsu matsuri) dates back to the 17th century and is enthusiastically celebrated every year.

Situated on Mount Hiei, the second great temple, Enryaku-ji, dates from 788, when a monk, Saicho, was given permission to create what would become one of the most significant Buddhist monasteries in Japan. An example of the Tendai school of Buddhism, it was one of the most influential spiritual centres in the country. You reach it by cablecar from Hieizan Station, which you get to by bus or train (15 minutes on foot from JR Hieizan-Sakamoto Station on the Kosei line). Though the area is not as imposing as it was in the past, it remains an impressive place with its three main clusters of buildings: Todo, Saito and Yokawa, all connected by footpaths, which lead visitors into the heart of a magnificent forest. You can spend the night here and experience the way of life according to the precepts of this school of Buddhism. You can take classes in zazen meditation and also enjoy wonderful shojin vegetarian cuisine prepared with local produce. The gomadofu (tofu with sesame), is excellent. Enryaku-ji is a UNESCO World Heritage site, and for centuries it’s had enormous influence over Kyoto, and those buildings that have not succumbed to the passage of time are proof of its greatness. Mount Hiei has magnificent views over Lake Biwa, as does Mount Horai on whose slopes Biwako Valley is situated, from where you can enjoy stunning views over the lake (10 minutes by bus from JR Shiga Station on the Kosei line). People who love snow can ski here in winter, but whatever the season, it’s worth coming to spend a few hours to contemplate one of the most beautiful panoramic views in the country from the Biwako Terrace situated at the exit to the cablecar. As the locals also enjoy visiting these places, you need to arrive early and be prepared to queue. But there’s no lack of other places in Otsu where you can take time to stroll in unique surroundings. Among the many choices for visitors are boat trips across Lake Biwa on board Michigan (various prices from 2,780 yen), a boat named in honour of the twinning agreement between Shiga Prefecture and Michigan State, in Midwestern United States, or along the River Seta leaving from Ishiyama-dera (1,500 yen). The spectacle is worth the effort and will allow you to understand the attraction of this lakeside city full of history and traditions. One of the most important is Otsu Festival (Otsu matsuri), which takes place every year on the first weekend in October. It’s listed as an “Intangible Cultural Heritage”, and this annual event, which can be compared to the Gion Festival in Kyoto, still preserves a human element to it, now completely lacking in the festival held in the former Imperial capital. The procession of floats unfolds in a warm, easy-going atmosphere, allowing you to catch a glimpse of the Japanese soul, which you’ll also find within the surroundings of the Tenson shrine, where dozens of stalls of all kinds recall the genuine spirit of Japan. Strolling among the families, groups of friends come to make the most of the festival while enjoying takoyaki (octopus fritters), yakisoba (fried noodles) or a choco banana (chocolate covered banana), and give you a real impression of Japan, far away from the hoards of tourists.

The fact that it’s not situated on the famous “Golden Road” means that hotel prices are quite a bit lower than those in Kyoto. You can choose to stay in the impressive Biwako Otsu Prince Hotel with its 37 floors overlooking Lake Biwa. The unrestricted view from many of its rooms is also an excellent reason to choose to stay here rather than in more expensive hotels in Kyoto. Biwako Hotel has lovely views, too, and is designed to look like a cruise liner. But there are more modest places to stay (see page 18) where the same kind of hospitality as found in the best ryokan (traditional inns) is practised. Last but not least, Otsu is somewhere that will delight food lovers. The proximity of Lake Biwa means that fish is an important ingredient in local cuisine. It’s also where funazushi, the predecessor of sushi, first made an appearance. Many restaurants serve this speciality, to the delight of people who love their food full of character and flavour. But local food is not just about that. Otsu is also famous for Omi beef, which alongside Kobe beef, is some of the the best meat produced in Japan. A short walk to Matsukiya butcher’s shop (Tel. 077-534-1211,8 minutes on foot from the JR Ishiyama Station on the Biwako line), which supplied beef to the Imperial Court for a century, and now also comprises a restaurant, allows you to enjoy a unique culinary experience at a reasonable cost, considering the high price of this renowned meat. Nevertheless, you must expect to pay more than in the average restaurant. And if the appeal of Kyoto proves too strong — it is after all, the only place you’ll find the Golden Pavilion, Ryoan-ji’s stone garden or the magnificent Kiyomizu-dera Temple — then nothing will prevent you from going. It’ll only take you about ten minutes to get to Kyoto Station and its thousands of sometimes… rather unruly tourists.

HOW TO GET THERE
from jR Kyoto station, take the Biwako line and get off at otsu station. There are taxis and a free shuttle services, mostly to Beware otsu prince Hotel.
You can also get to otsu from sanjo station with the Keihan company (otsu line).

No50 Setouchi, a whiff of the aegean sea