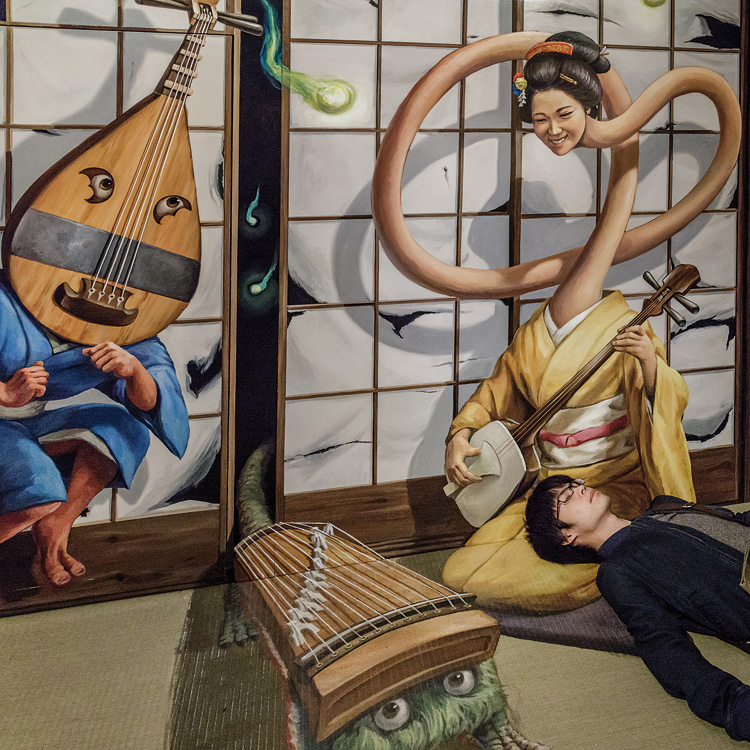 Don’t be afraid. The Japanese ghosts and monsters are ugly but not so bad.

Japan has a long tradition of stories featuring ghosts and other monsters. Follow the guide.

Halloween is that time of the year when the occult, the macabre and the humorous come together in order to create a sort of dark, but basically child-friendly carnival. Even though the celebrations include death- and monster-related imagery, everything stays on a playful level.

Halloween was not celebrated in Japan until recently, but the country has been open to cultural and religious traditions from abroad for a long time, and the younger generations seem to have seized on a new opportunity to party in a faux-spooky fashion. It might be that Halloween reminds them of cosplay, which is by no means limited to animeand video game-inspired costumes, but includes ninja, samurai, and other traditional elements. It must be said that the Japanese have taken their ghosts and monsters very seriously for centuries, as attested by the long history of supernatural fiction and spooky storytelling. During the Edo period, for example, there was a popular game among the samurai called Hyakumonogatari Kaidankai (A Gathering of One Hundred Supernatural Tales).

The players gathered in a room at night and, after lighting one hundred candles, took turns telling scary stories. After each tale, a candle was extinguished, and the room slowly grew darker and darker. It was believed that when the room was completely dark, a ghost would appear.

According to Edward Lipsett, the Fukuoka-based American expat who, since 2002, has published many such works through his Kurodahan Press, kaidan (strange tales) and kaiki shosetsu (uncanny fiction) were born as a genre in the mid-seventeenth century and have been very popular ever since, thanks also to numerous theatrical and movie versions. Just to name one of the more famous and artistically accomplished, in 1953, Ueda Akinari’s Ugetsu Monogatari (Tales of Moonlight and Rain) was turned into one of the masterpieces of Japanese cinema by director Mizoguchi Kenji.

Curiously enough, the classic horror elements so common in the Western ghost story are not always present in their Japanese counterparts. More often than not, these stories are about “an ordinary occurrence, interrupted”. “By ordinary”, Lipsett explains, “I mean usual, normal aspects of life that are somehow disrupted by weird events. A good tale is not just about fear and blood, after all.” Not only that, it seems that many, if not most, Japanese ghost stories are based on real facts. “It is at least true”, Lipsett says, “that one of their main characteristics is a blurring of the border between fiction and nonfiction.” The three-volume “Kaiki” series – one of Kurodahan’s more popular productions – explores this unique tradition through a collection of short stories, both old and modern. They resemble dream studies in which the characters try to make sense of the weird situations in which they find themselves trapped.

A unique feature of Japanese folklore is a quite large group of oddball demons and spirits called yokai who walk a thin line between horror and ridicule. Not quite human, but capable of a wide range of human emotions, more often than not these creatures are neither good nor bad, but are often mischievous and like to play tricks on their victims. Their shape-shifting powers make them particularly hard to recognize. Probably the easiest to grasp are the kappa (water goblin), the tengu (mountain goblin), the kitsune (fox) and the tanuki (raccoon dog). The most famous Tokyo-specific yokai are probably the Nopperabo (“faceless ones”), which Lafcadio Hearn wrote about in his story Mujina, and the Ashiarai Yashiki. The Nopperabo appear to be normal humans, but with horrifyingly smooth and featureless faces. A century and a half ago, they were often seen in Akasaka’s Kii-no-kuni Slope, once considered one of the scariest places in the city. The Ashiarai Yashiki, on the other hand, is an enormous, disembodied leg and foot that smashes through ceilings without warning in the dead of night, demanding to be washed. Legend has it that the first Bigfoot appeared in a royal mansion in the Edo district of Honjo, corresponding to Sumida Ward in present- day Tokyo.

Another class of supernatural beings that often overlaps with the yokai is called obake or bakemono, a term that is often translated as “ghost” even though they are sometimes distinct from the spirits of the dead. Following the Shinto and animistic traditions, they can belong to the animal or vegetable world, like the bakeneko (trasforming cat) and the kodama (the spirit of a plant), while the tsukumogami are household objects. All these spirits and monsters have often infiltrated the world of pop culture and entertainment, one famous example being obake karuta, a popular card game between the Edo period and the 1910s or 1920s, which can be considered as a precursor of the Pokemon Trading Card Game whose characters’ designs are a specific reference to creatures from Japanese mythology. More recently, in 1959, the late manga artist Mizuki Shigeru created a series, GeGeGe no Kitaro, in which not only the 350- year-old one-eyed protagonist and his ghost father Medama Oyaji (lit. Eyeball Father) but all the characters are yokai. Though hugely popular in Japan, this series has never broken into the overseas market, apparently because it’s too weird even for the most fervid foreign manga lovers.