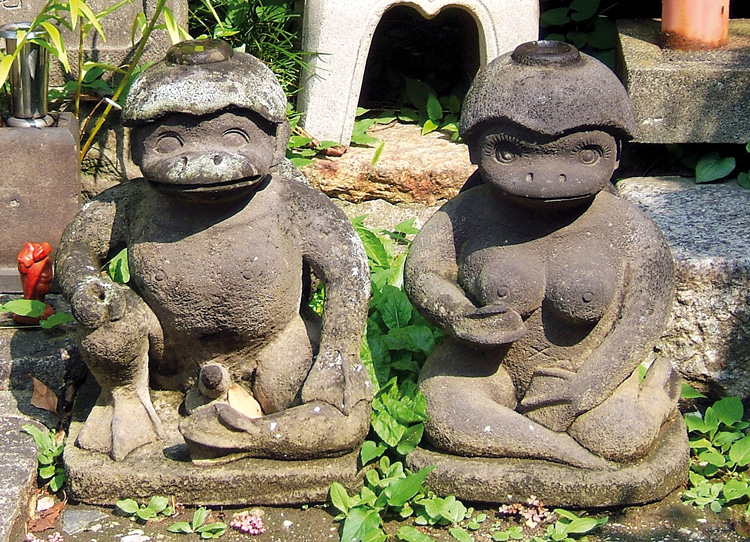 Sogen-ji is a temple devoted to kappa, those mischievous characters who live in close proximity to rivers.

The Japanese capital is full of strange places where you’re sure to come across even stranger characters.

If it’s true that supernatural beings are a form of energy strongly connected to violent death and tragic events of the past, then Japan is the perfect breeding place for such phenomena. Tokyo, in particular, is a city with a history of catastrophe and death. Blood is everywhere: numerous bloody samurai uprisings, hara-kiri, fire-bombings, modern-day suicide. The capital was racked by earthquakes and terrible fires all through the Edo period, the death toll often reaching into the tens of thousands. Dead bodies were thrown into mass graves without proper funeral rites performed to allow the souls to move on. These makeshift graveyards are located everywhere underfoot. From the beginning of the 17th century, the Tokugawa shogunate employed feng shui in city planning to make the capital a kind of spiritual power centre. That, along with certain favourable environmental conditions such as dampness and seismic activity, turned the city into a vortex of ghosts and paranormal activity.

There are many ways in which even non-experts can “enjoy” a few mild scares and ghost-induced thrills. Among my favourites are haunted walks around Tokyo. The city’s Ueno and Asakusa districts offer a great opportunity for this kind of experience while exploring Japan’s long love affair with spirits.

The area around the Tokyo Metro’s Inaricho Station, from where our walk starts, is full of temples, shrines, and other related businesses such as stores selling butsudan, those small Buddhist altars that people keep at home to pray for their ancestors – and into which an evil spirit sometimes pulls an unsuspecting person (at least in some J-Horror films such as The Grudge).

This is a notoriously risky spiritual area, and the locals believe that it’s cursed: the suicide rate is alarmingly high, when someone tries to start a business it goes bankrupt and every time they build something, they dig up some human bones. In fact, the district east of Ueno is a huge unconsecrated mass grave into which thousands of victims of the many fires during the Edo period used to be dumped without receiving proper funeral rites.

Spooky tales aside, this area is also worth visiting for its relatively high percentage of very old buildings. Many of them are covered with sheets of corrugated iron, probably to protect them from fire. There’s also a row of some pre-war houses in a Moto Asakusa backstreet. The mistresses of important people used to live here in the past. This particular place is well worth a visit, especially if you’re into historical architecture. Until just a few years ago, five such buildings remained standing side by side – very rare, considering all the past destruction. Unfortunately, only two are left now, so if you want to check them out you’d better hurry.

Next we come to Sogen-ji, better known as Kappa-dera or Kappa Temple because it houses so many memorabilia devoted to those childsized, monkey- or turtle-faced goblins with heads topped by a plate-like disc, which live in the waterways. At the entrance we’re greeted by a wooden sculpture of one of these tricky creatures while “in transition.” Like other yokai, kappa have the ability to morph into different shapes, including human beings. In this very temple, one can take the opportunity to admire a real mummified kappa hand.

Walking through the Matsugaya district, every few metres we find statues and other assorted images of this ubiquitous little character. According to legend, kappa from the nearby Sumida River helped the local people stop the constant flooding of the area. Business continued to prosper and, even today, the Kappabashi district is famous for selling kitchenware and catering supplies including those models of fake food you see displayed in restaurant windows.

More weird and scary stories await us once we reach Asakusa. The Buddhist temple called Chingodo, for example, is devoted to another yokai – the tanuki, or racoon dog. Notorious tricksters in Japanese folklore, tanuki are renowned for their huge testicles, which can be stretched at will and used as both tools and weapons.

Not far from the temple, our attention is caught by the screams of terrified people.

They emanate from Hanayashiki, the oldest amusement park in Japan – and arguably one of the least safe. Few people know that this place was originally a botanic garden before fairground rides and freak shows were introduced. Its obakeyashiki (haunted house) was supposedly haunted by a real ghost, which, after the attraction was demolished, is said to wander endlessly round the park.

The last stop on the tour is the Old Hag’s Pond just east of Senso-ji. This is the site of an inn run by an evil old woman who murdered countless guests by dropping a boulder on them as they slept. The legend became one of Japan’s first horror films. If you’re brave enough to visit the place at night, you might hear cries echoing over the still, stagnant waters…