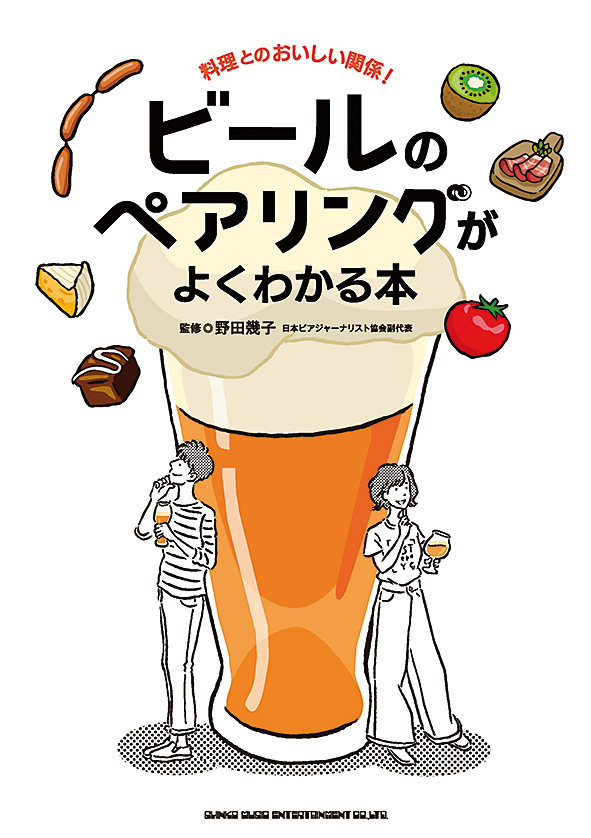 Author of a reference work on the subject, journalist NODA Ikuko discusses the relationship between beer and food.

In 2018, beer journalist NoDA Ikuko used her extensive knowledge of beer and food to publish a fun and informative book called Biiru no Pearingu ga Yoku Wakaru Hon (How to master Beer Pairing), and she was kind enough to share with Zoom Japan some of the secrets for the best way to enjoy beer and food.

Why did you decide to write this book?
NODA Ikuko: one day I happened to be at a tasting event and I came across a seemingly im- possible pairing: a raspberry-flavoured beer – Kirin Jazzbery – and shuto, or pickled bonito (mackerel-like fish). Shuto is quintessential Japan- ese food and has a strong, pungent smell. It goes very well with sake, but a raspberry-flavoured craft beer?… I was very skeptical, so you can imagine my shock when I tried them together and it turned out to be a fantastic combination. By that time, I had already worked on a few beer-related book projects, both as a writer and editor, and I was increasingly interested in this particular subject after attending many beer pairing events and sharing my thoughts with FUJIwArA Hiroyuki, the Chairman of the Japan Beer Journalists Association. But the Jazzbery/shuto tasting was the clincher. I decided then and there that I wanted to devote an entire book to beer pairing.

It certainly takes a very imaginative mind to combine raspberry beer and pickled bonito.
N. I.: That’s what I thought too. However, Jazzbery’s sourness and fruity aroma help tone down shuto’s strong fishy smell. the end result of this strange combination is something that in some respects is completely different; a novel taste that’s more than the sum of its parts.

When most people consider food pairing, they usually have wine in mind – or sake, if we think about Japanese cuisine. However, ac- cording to your book, beer is also a perfect match for a lot of dishes.
N. I.: It is arguably even better than wine and sake. Beer goes with a lot more than pizza. In fact, beer has a wider range and is far more con- genial than wine for many foods.

Why is that?
N. I.: When you think about it, sake is made with rice and yeast; wine is only grapes and yeast. However, in beer-making you can use a wide variety of ingredients. Apart from its three basic elements – malt, hops and yeast – brewers have been adding the most disparate things, from herbs, spices and fruit to brown sugar, honey and maple syrup. You can practically add anything to the basic mix. there’s a freedom in beer-making that can’t be found elsewhere. the possible permutations are virtually endless, and it’s up to the brewer to use his knowhow and creativity to make something unique. Now, to answer your question, each added ingredient results in a beer with a very different flavour, which in turn increases the number of possible food/beer combinations.

Also, beer has another important characteristic that sets it apart from wine and sake: the alcohol by volume (ABV), that is the percentage of alcohol contained in a certain alcoholic beverage. wine generally contains 9-16% ABV and undiluted sake contains 18-20% ABV (although this is often lowered to about 15% by diluting with water before bottling). Alcohol is there, upfront, when you drink wine and sake. However, most beers only contain 3-9% ABV. In other words, beer is not as strong as other beverages; it does not have the same alcoholic impact. this, in my opinion, makes it easier to pair with different dishes. French, Italian or, of course, Japanese. Any cuisine goes well with beer.

In the end, beer is very forgiving. It would be difficult to find a completely wrong combination. with wine, for example, you are constantly re- minded that red wine shouldn’t be drunk with fish. Such rules simply do not exist when pairing food with beer.

Are there any pairing rules one should be aware of?
N. I.: Yes, there are a few tips that make pairing easy even if you are not an expert. the simplest thing you can do is choosing food and beer with the same colour. As you know, beer comes in several colours: blonde, white, red, dark. what makes all the difference in the colour and body of a beer is how darkly the malt has been roasted: the darker the roast, the darker the beer that results from this ingredient. For example, stout and coffee are dark for the same reasons. In beer’s case, the roast affects not only the colour of the finished beer but also the body and many of the flavours in the brew. So if you follow the colour rule, you should pair a dark beer with dark-coloured food. Chocolate, for example, is an unusual but excellent combination. that’s because a dark beer tends to have a deeper, more complex set of flavours including notes of chocolate and toffee flavours, which come primarily from the malt. A dish that goes well with dark beer is beef stew or, if you prefer Japanese food, kinpira gobo (chopped burdock root cooked in sugar and soy sauce). Yakitori (skewered chicken) is another great choice, but only when flavoured with tare (a sweet soy sauce-based mixture). on the contrary, when you eat salt-flavoured yakitori or white fish you should choose a Pilsner. raw food such as carpaccio and sashimi also go well with a blonde beer.

As you can see, this kind of visual pairing can be easily achieved even by people with little or no knowledge of beer. then, of course, there are more sophisticated approaches to pairing, based on food and beer aroma and taste. remember that all beers contain three different elements – sweetness, sourness and bitterness – in different percentages. A rather sweet beer, for example, goes well with food that contains a certain amount of sweetness, like nimono, which is food simmered in dashi stock made with sake, soy sauce and a small amount of sweetener. on the other hand, the aforementioned Pilsner and carpaccio are a good match because they both have an element of sourness. though contrasting the flavours of a beer with a dish can be equally satisfying and, when well done, often more mem- orable. the raspberry beer/shuto combination is a case in point.

Last but not least, one should not forget about beer’s cleansing role in a meal. the Japanese love to drink beer (e.g. the ubiquitous Asahi Super Dry) with fried food, and with good reason as carbonation naturally makes beer, and Pilsners in particular, an ideal option for cleansing the palate when eating rich or fatty foods. 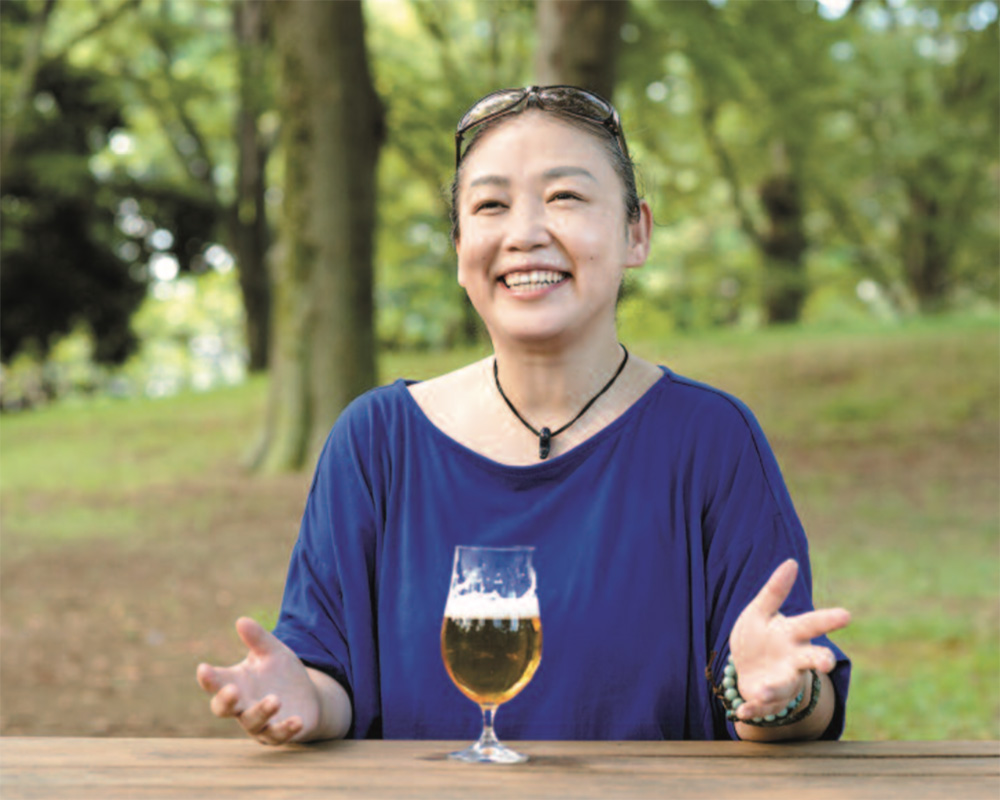 The journalist believes beer is a great accompaniment for many dishes.

Recently, we’ve been eating soba noodles quite often at home. What kind of beer would you suggest with soba?
N. I.: To soba connoisseurs, the noodles’ natural flavour is very important, so I would say that it’s better paired with a weak-flavoured beer whose flavour won’t overpower that of soba (noodles made from buckwheat flour). Again, Pilsner is a very good choice, but my favourite pairing in this case would be a Kölsch-style beer. this is a pale, bright german beer made in Cologne with a mellower taste than Pilsner because it’s not as sour and bitter. So it’s a perfect match for delicate, subtly flavoured Japanese dishes.

As we are talking about Japanese food and ingredients, something I’d like people to try with a good Pilsner is ginger or the Japanese variety, myoga, whose flower buds are used as a garnish for miso soup and dishes such as roasted aubergine. Its strong, characteristic aroma goes incredibly well with light beers. Same thing with shiso, a mint-like herb, or, to mention something western people are better acquainted with, celery. Actually, in Japan there are a few craft beers that are made with ginger, sansho (Japanese pepper), and other similar plants, so when visiting Japan, you should definitely try them.