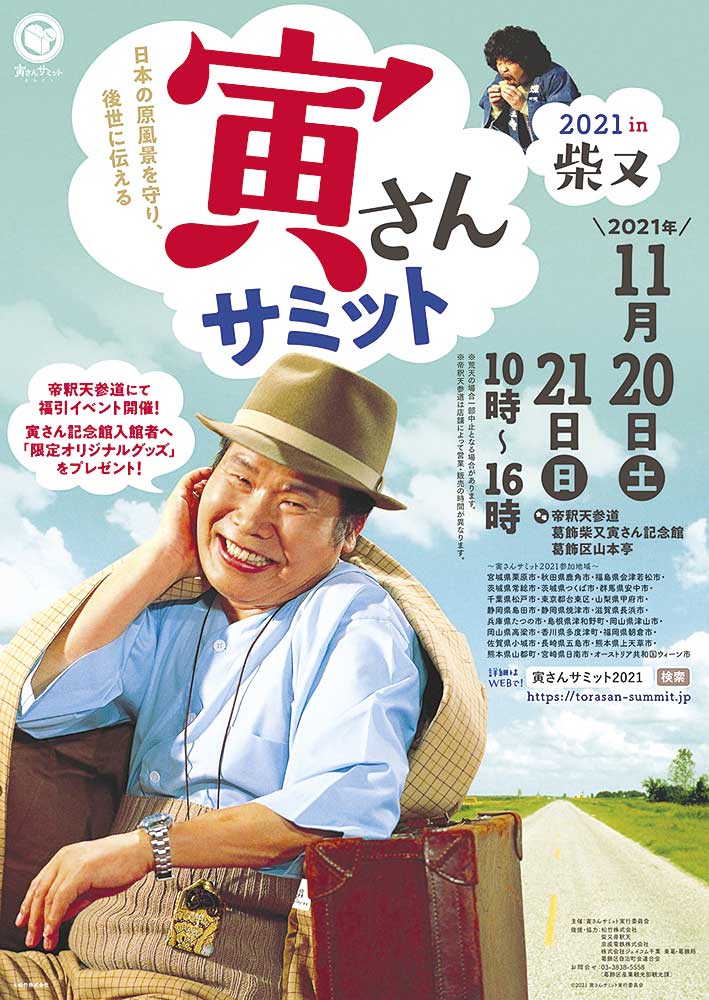 The spirit of Tora-san is ever present in this district in the north-east of the capital where he lived.

Otoko wa tsurai yo (It’s Tough Being a Man) may be a thing of the past, but Tora-san fans can revisit the series and its many film locations at an annual event which takes place in Shibamata, where the fictional Kuruma family lives.

According to Aramaki Sho of the Katsushika Ward Tourism Department who is in charge of the two-day event, the Tora-san Summit (https:// torasan-summit.jp, www.facebook.com/torasan, www.instagram.com/torasan_summit) was first held in 2015 following a proposal by the chairman of the Jinmeikai, the real-life shopping street where Tora-san’s family dumpling shop is located. “We live in an era when everything seems to change at a rapid pace,” Aramaki says. “That’s why the time has come to reevaluate those things that remain unchanged. Shibamata is one such place and the Otoko wa tsurai yo series features places and landscapes – not only in Shibamata but all over Japan – that have managed to retain their traditional charm. Series director Yamada Yoji himself has expressed his desire that these locations remain faithful to their traditional values and do not succumb to the winds of change.”

The Jinmeikai was also behind the idea of putting statues of Tora-san and his sister Sakura in front of Shibamata Station. The retail association financed the project, and Katsushika Ward is now in charge of looking after them. 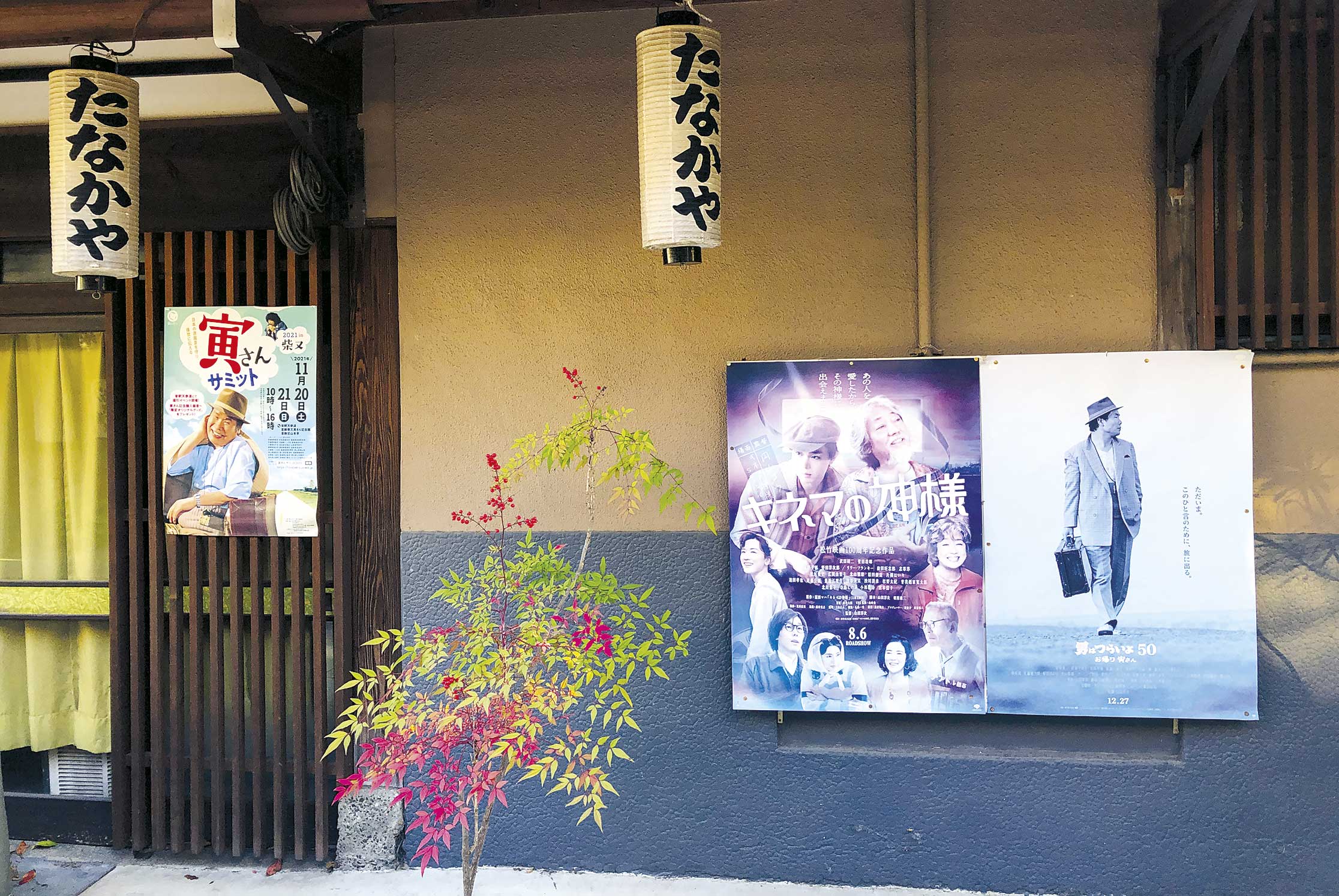 The Tora-san Summit takes place around some of Shibamata’s main attractions and film locations such as its shopping street, the Taishakuten Buddhist temple and the Tora-san Museum. While the event’s basic structure and feel have not changed, each year it strives to introduce new elements and participants. “In 2017, for example, (5:55),” Arimaki says. “Then, in 2019, to celebrate both the Summit’s fifth anniversary and Tora-san’s fifteeth, Yamada Yoji and some of the main cast (Baisho Chieko, Maeda Gin and Sato Gajiro) made a special appearance and shared their memories of working on such a long project.”

The relationship between Shibamata and Yamada Yoji is pretty unique. No other director has ever shot films in the same location for so many years. Between 1969 and 1989, he actually made two films every year, so he likes to say that Shibamata has become his home. This close, almost symbiotic relationship with the Tora-san saga has benefitted Shibamata to such an extent that in 2018 it was selected as an Important Cultural Landscape by the Ministry of Culture. “The people of Shibamata are obviously proud of their heritage and their connection with Tora-san,” Aramaki says, “and they are eager to introduce the area’s cultural history to the many visitors who make the long trek to this little corner of Tokyo.”

The Summit itself has steadily grown in popularity, rising from an initial attendance of 21,000 visitors in 2015 to settle at around 80,000. “We were lucky that in 2017, TV Tokyo broadcast a special programme on Shibamata featuring our event,” Aramaki says. “Thanks to this unexpected publicity, attendance suddenly shot up from 38,000 to 88,000 visitors and has remained very high since.”

Asked about the Summit’s popularity, Aramaki says that you do not have to be a Tora-san fan to enjoy the event. “Shibamata is an excellent example of what the Japanese call Showa Retro,” he says. The Showa era lasted from 1926 to 1989, but the term Showa Retro specifically refers to the years between the mid-50s and the 1960s. Many people look back with nostalgia at that moment in Japanese history, the “good old days” when everybody looked to the future with optimism. 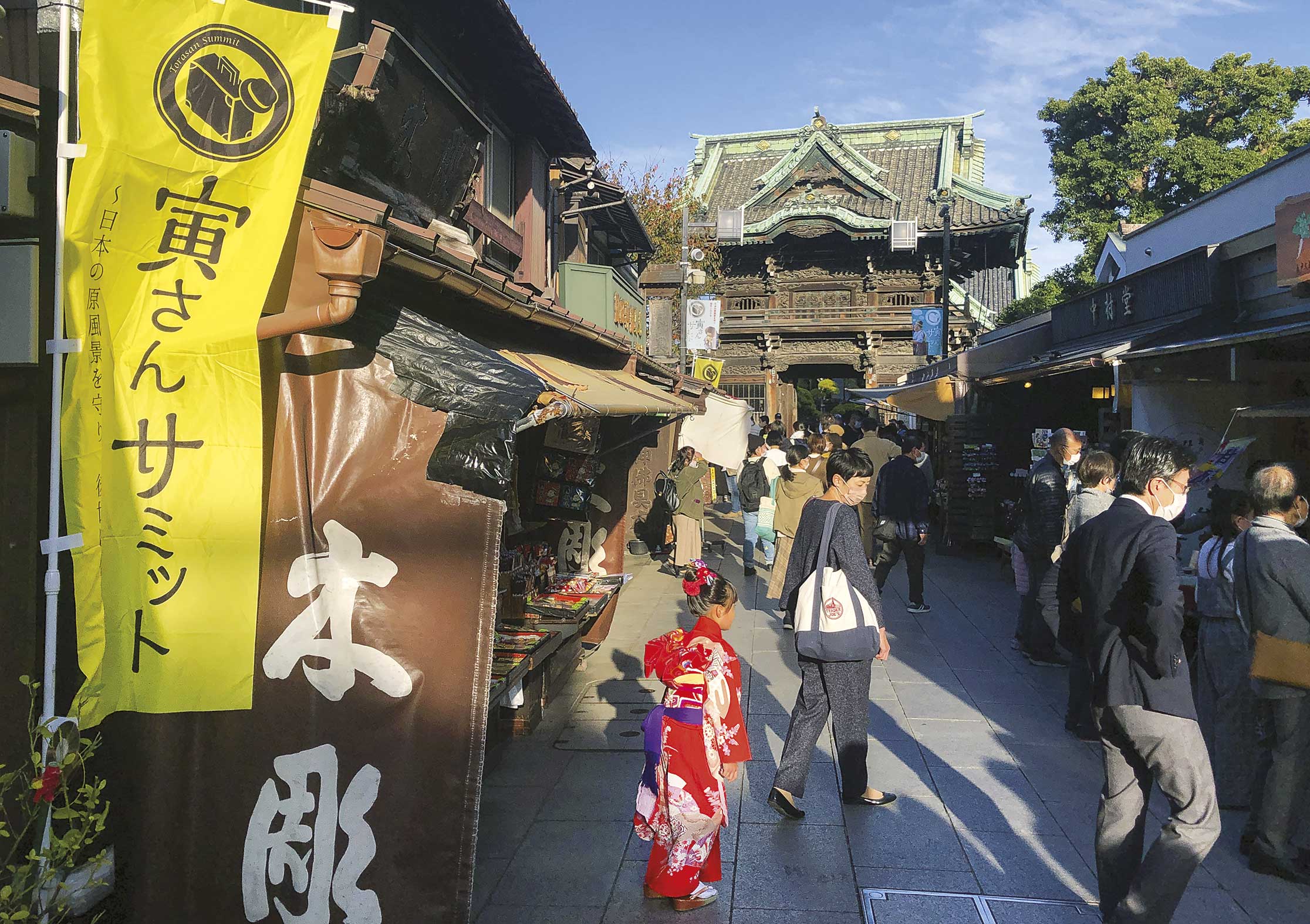 “Many other locations around Japan are also represented every year at our event,” Aramaki adds, “so a visit to the Summit is a good chance to plan your next trip around Japan. Last but not least, gastronomy plays an important role in the festivities as every year we come up with new dishes that attract food lovers from everywhere.”

When it comes to food, Shibamata is synonymous with dango (glutinous rice dumplings) because that’s what Tora-san’s family sells in their old-style shop near Taishakuten. During the Edo period (1603-1868) this area was surrounded by fields, and farmers used to make dumplings with yomogi (Japanese mugwort), a plant from the sunflower family. The daughters of farmers who went to work in samurai residences and large merchant houses as apprentices used to bring them as a gift. 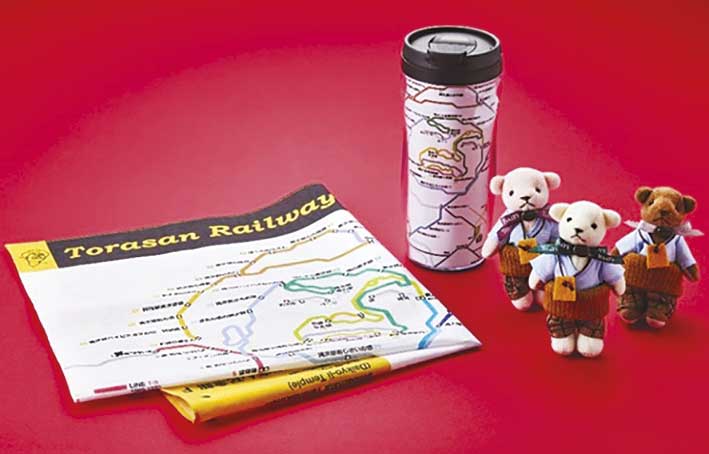 But of course, the Tora-san Summit is not only about dumplings. “As a public servant who is in charge of the event, I guess I shouldn’t reveal my personal tastes,” Aramaki says laughing, “but among the food available this year, I particularly like the roasted-green-tea cake roll from Okayama and the cake roll made with rice flour by a local Japanese confectioner. But of course, it’s more than just sweet food on offer. There’s something for every taste.”

Speaking about future plans for the Summit, Aramaki points out that the challenge for Shibamata is to attract younger generations who may not know who Tora-san is. “It’s true that many teenagers and 20-somethings have never seen a Tora-san film,” he says. “However, we hope that such places as the Tora-san Museum will act as catalysts to create a new interest in the area. Many older visitors often bring their grandchildren with them. Hopefully, they will transmit their love for Tora-san to those kids.” According to the Tora-san Summit website, “The never-changing landscapes and human values are a central feature in Otoko wa tsurai yo, and this event aims at protecting both those places and ideas as an important characteristic of this country.” Aramaki agrees that these values should be nurtured for future generations. “The nuclear family model has become widespread in Japan,” he says, “but I grew up in a three-generation family, and I’m grateful that I was able to live with my grandparents. The Tora-san films show the importance of sharing the happy and sad things in life with both your family and the local community.

“Everyone has an original landscape in their hearts. It is different for each person and might be a real landscape or an imaginary one. Whatever the place, it has the power to make you feel nostalgic and take you back to your childhood memories. By protecting these places, we hope to nurture our ‘landscapes of the heart’.”