A year after service resumed on the Senseki line between Sendai and Ishinomaki, the revival of the area is now in full swing. 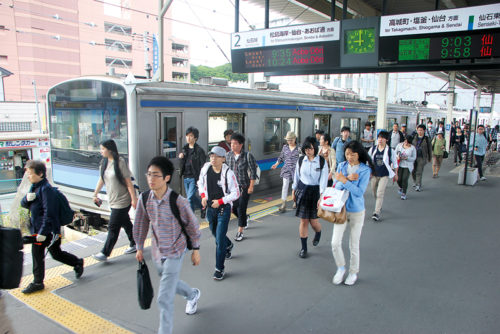 The 2011 North-East Japan tsunami had badly damaged the Senseki railway line between the stations at Nobiru and Tona, meaning that many connections were maintained by buses before the reconstruction. As a result of the renovation and reorganization of the the town and the housing provided on higher ground for the earthquake victims, both the railway tracks and the stations themselves had to be re-situated. Finally, on the 30th of May 2015 Higashi-Matsushima celebrated the reopening of its local line. The new Senseki-Tohoku line that runs alongside part of the Tohoku line means it now only takes 52 minutes to connect Sendai and Ishinomaki, actually making the travel time 20 minutes shorter than before the earthquake. Travelling from Tokyo to Ishinomaki with a change at Sendai now takes less than three hours. According to the JR officials in Sendai, by the end of April 2016 the number of passengers travelling between Senseki and Tohoku had risen to 4,100 people per day. The number of passengers travelling between Aobadori and Ishinomaki has also increased by 3% since 2010. The number of people, mostly workers and students, who travel on weekdays is greater than the number of tourists travelling over the week-end, mainly due to the fact that many people decided to live outside the city after the earthquake.
On the 26th of March Ayumino station in the Shinhebita-Minami district was re-opened, bringing access to an area less prone to the risk of catastrophe in which the local authorities are developing a new urban centre with collective housing. For the past thirty years there had been talk of a maybe building a new station, provisionally called Yanaginome, in the Akai district of Higashi-Matsushima near Ishinomaki-Nishi high school. This project finally came to be realised after the earthquake, and the station provides a new doorway into the region where the new landscape really reflects all the reconstruction work that has taken place. New neighbourhoods are growing up in Higashi-Matsushima, to north of the Higashi-Yamoto station and around the new railway stations at Nobiru and Tona. JR believes that; “these reconstruction projects could lead to an increase in the number of passengers”. The reopening of the line also led to a rise in the number of tourists. 2.3 million people visited Ishinomaki in 2015, 200,000 more than in the previous year and greater even than 2013’s record number of 2.2 million people. “A month after the line was reopened we saw a slight increase, but the change wasn’t that significant. However, we have noticed more older couples as well as students going on day trips, and former inhabitants from the region now find it easier to make return visits,” says Mrs. Takashi Mie, president of the Tatemachi- Odori trade association, whose visitor visitor centre welcomed 186,900 people in 2015, compared to 174,000 in 2014. What’s more, the total for the first three months of 2016 is already higher than during that same period last year.
In Higashi-Matsushima the principal tourist locations are concentrated around Oku-Matsushima and in Nobiru and Miyato, although there are still few means of transport to enable tourists to reach these from Nobiru station, the main point of arrival in the area. There is a plan to transform Nobiru’s old station into a museum and preserve the platform as a memorial to the earthquake, but nothing has been planned to connect this museum to the new station yet.
At the moment the Senseki line ends in Ishinomaki, but over the summer it will be extended to Onagawa, a town that is currently served by only two trains a day, one in the morning and one in the evening. However, it is important that Ishinomaki does not stay as just a transit point and the various local communities need to work together to provide tourist accommodation and prolong stays here and in the neighbouring towns.