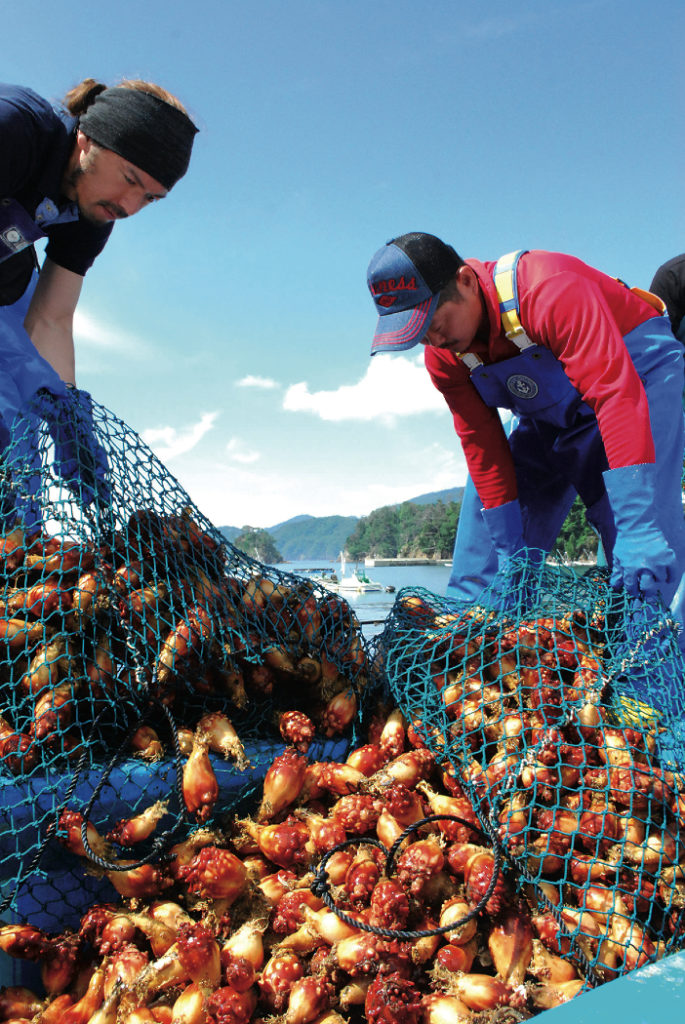 Rich in minerals, sea squirts, or ‘sea pineapples’ as they are called in Japan, get their name from their appearance. The preferred way to serve these delicacies of the sea is as sashimi accompanied with sake, a speciality of the Sanriku region where Ishinomaki is located. However, this summer, a large quantity had to be discarded following an embargo imposed in 2013 by South Korea, a huge sea pineapple importer. The situation is no better on a national level and if this crisis continues, there is a risk of the sea becoming contaminated due to the rotting carcasses of all the squirts that have to be thrown back. Miyagi Prefecture’s fishermen’s union even decided to reject 14,000 tons of sea squirts, just at the point they had returned to pre-tsunami production levels.

Sea pineapples are specific to the Tohoku region and before the 2011 earthquake, the annual production here reached 14,000 tons. Miyagi Prefecture alone used to produce 8,000 tons in various places situated between Kesennuma and the north coast of the Ojika Penninsula, but the region around Ishinomaki is the largest area for the cultivation of sea pineapples. Before spring 2011, between 70 – 80% of the sea pineapples cultivated here were exported to South Korea, where they are eaten raw, grilled or used in kimchi and bibimbap recipes.

The Korean interest in Japanese production goes back two decades, to when local Korean sea pineapples developed a disease that affected 10% of their yield. Imports from Japan were turned to, and in particular those from Ishinomaki. After remaining stable for a long period of time, the price of sea pineapples started to rise over the course of a decade due to the increase in demand. The tsunami caused a lot of damage to the cultivation equipment and most of the sea pineapples, as well as oysters, were decimated. Cultivation restarted thanks to financial support from the Ministry of Agriculture and from Miyagi Prefecture. Volunteers also helped the local fishermen-producers. Sea pineapple cultivation begins by attaching the larvae, which float in the water, onto oyster shells. However, all the equipment had been destroyed, alongside the egglaying sea pineapples, and there was not a sufficient natural population to ensure renewed production, so the farmers had to proceed by breeding them artificially. Of course, the successful outcome of this operation relied on the prospect of the same level of exports to Korea as before the earthquake.

By 2013, production had returned to previous levels, but then South Korea banned imports of Japanese sea food, notably from Tohoku. The official reason for this was the contamination of the sea by Fukushima Dai-ichi’s nuclear power station, although no contamination by the power station has ever been proved. “They’re only rumours. And it’s sad that we are back at the situation we were facing in 2011,” some fisherman say. Moreover, the tests that were undertaken by Japanese and Korean experts in December 2014 revealed an absence, or very low levels of radiation, well below South Korea’s strict requirements. As it seems unlikely South Korea will lift the embargo anytime soon, the prefecture’s fishermen’s union has decided to throw itself into promoting domestic consumption to bring their market back up to 2014 and 2015 levels. Following this decision, the consumption of sea pineapples in Japan has risen from 2,000 tons before the earthquake to 4,100 tons per year. However, that is still insufficient and most cultivated sea pineapples remain in the sea. The best time to harvest them is 3 to 4 years after implantation, but after 4 years, they start to lose their flavour. If sea pineapples are separated from their perch on an oyster and fall to the sea bed, as is the case during typhoons, they risk polluting the water. There is also a chronic lack of space to breed more sea pineapples. Taking all these factors into consideration, the union decided to throw a large number of these shellfish back into the sea. “We’ve tried everything to promote their consumption nationally and reach a profitable level. But some people still insist we lower the price, and that will lead to the collapse of the market,” says one local manager.

Over 14,000 sea pineapples have had to be thrown back into the sea since July, in the ports of Onagawa, Minamisanriku and Ishinomaki itself. They can be reprocessed as fertilizer, but administrative formalities have curtailed distribution to where it can be used, and the delay in finding a solution to the problem is jeopardizing the population conservation efforts. Local fisherman’s unions and various other organizations insist that responsibility for the situation lies with Fukushima’s nuclear power station and intend to ask for compensation from Tepco, the company that operates it. The fishermen who have been affected also hope to convince South Korea that they are all working to the same end, and are asking them to lift the embargo as soon as possible.