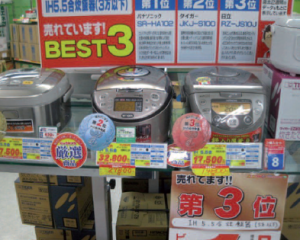 Since it first appeared on the market in the 1950s, this appliance has become a musthave for all those who love eating rice.

Hong Kong director Wong Kar-Wai’s 2000 feature film “In the Mood for Love” showed Mrs Chan’s husband traveling abroad for work and often being requested to bring back the latest gadgets. When he goes to Japan it is a rice cooker he seeks. First brought out in the 1950s by Toshiba, this appliance improved the daily lives of millions of Japanese before becoming a must-have for other Oriental families too, and more recently, for all those around the world who love rice. Before Toshiba revolutionized Japanese kitchen habits, rice was cooked on the kamado, a large stove that you could find in every kitchen across the archipelago. After lighting the fire, a stewpot would be placed on it filled with water and rice. The final taste of the rice depended on the heat of the flame, with sometimes disappointing results. There is little more difficult than controlling the heat of such a primitive stove, and a lot of time was needed to watch it cook and avoid a culinary disaster. Japanese cooks knew the golden rule to cook perfect rice off by heart: “Hajime choro choro, naka pappa, butsu butsu iu koro hi o hiite”. (Start with a low heat, then turn it up and bring it down again when you hear it boiling.) You had to put in great effort and make many unsuccessful attempts to learn this knack of achieving the perfect cooked rice every time, and there is no doubt that many did achieve it, but when the first rice cooker appeared on the market, you can understand the enthusiasm of all those housewives who did not wish to slave over their kamado any longer.

There had already been some attempts to produce one in the 1920s, at a time when Japanese women living in the big cities wished to be freer and no longer be confined to the kitchen, but with no definitive results. In 1955, ten years after World War Two and exactly 60 years ago, Toshiba discovered the holy grail for thousands of Japanese women when they finally perfected a working model. Five years later, the first rice cooker capable of keeping rice warm came onto the market. A new milestone had been reached and more and more manufacturers (Hitachi, Mitsubishi Electric, Zojirushi, Tiger, Panasonic) started competing with ever more ingenious and sophisticated machines able to cook any type of rice or control the heat. Much of this was thanks to to the introduction of appliances with embedded computer chips in the early 1980s. Just as in the car industry, where Japanese companies have been great innovators, rice cookers went through an incredible evolution. They have often been imitated but never matched, becoming one of the most sought out gifts in recent years for the millions of tourists who visit the archipelago. The Chinese who visit Japan in droves are prime customers. Some of them buy 10 or 20 rice cookers as souvenir gifts for their loved ones. Just like Mrs Chan’s husband in Wong Kar-wai’s film, they know such a gift will be appreciated and valued. With the opportunities offered by the export market, Japanese manufacturers have become even keener. The sector leader, Zojirushi, now sells 20% of its goods outside Japan, principally in Asia. The “Made in Japan” branded on these appliances is seen as a guarantee of quality results. That’s why the number of rice cookers exported to China has multiplied by a factor of 20 since 2005. A similar trend can also be seen in Taiwan, Japanese manufacturers’ main export market, and the rise of keen interest in Japanese food in the West has led to new outlets being set up in Europe and the United States. European electrical appliance manufacturers have also entered the market, but their products do not reach the required high standard. This is similar to the “Made in China” rice cookers, which are certainly cheaper but give poor results. In some shops one is beginning to see rice cookers imported directly from Japan, specifically adapted for European power supplies. Numerous websites, based in Hong Kong in particular, also sell “Made in Japan” cookers at competitive prices. They’ve taken over from Mr Chan.