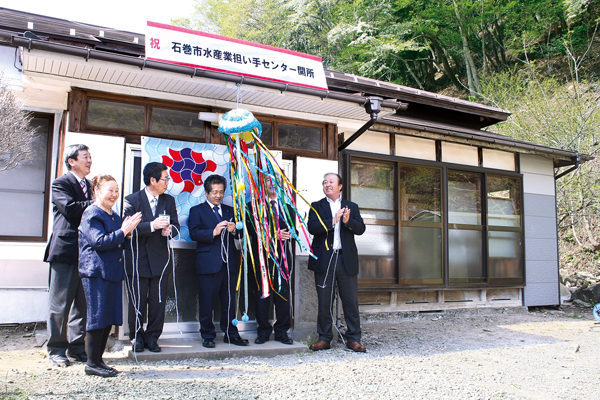 The municipality is trying to encourage more young people to take up careers in fishing.

In Japan there is a serious lack of people wanting to work in agriculture. Although the fishing industry in the Sanriku coastal region of Ishinomaki has known great success in the past, over the past few decades numbers of job-seekers wanting to take up this gruelling work have dwindled. After the earthquake, which destroyed all the fishing facilities, the fishermen did not return to their arduous jobs. Life is a lot less cheerful throughout the whole coastal region now. In response the city of Ishinomaki has decided to set up a reception centre, the Triton Oshika, in the Oginohama district of the Oshika Peninsula. It is a centre that welcomes young fishermen and promotes the pleasing and fulfilling nature of working at sea, and was inaugurated on the 27th of April. Its administration was handed over to the prefecture’s local fishing union and to the Japan Fisheries Association. The latter set up the Triton Project with the aim of attracting new workers into the fishing industry. With the support of Triton Oshika and young people from all over the country they hope to revitalise the coastal region.

The fifty-year-old building was renovated; it is a two-storey wooden building approximately 140 metres square, and will be used for short and mid-length stays. There are four rooms for those staying for more than a month, and one room for shorter visits. In total it can host up to eight people.

It was hard to believe that people would choose to move here to work in this maritime region devastated by the earthquake if, despite all the reconstruction aid, they couldn’t find accommodation. The Triton Oshika building offers a solution; it can be used flexibly, welcoming workers involved in seasonal fishing or technical high school pupils learning about the fishing industry. A common room is to be opened for meetings between local inhabitants and young fishermen.

Houses of this kind have already been renovated by the Japan Fisheries Association, chaired by Abe Shota. Since July 2015 three have been opened in the Kitakami-cho, Onagawa-cho and Minamisanriku-cho districts. There are four residents in these houses. Now that the project is being supported by Ishinomaki’s local authority there is better networking and communication both locally and further afield. Moreover, with the participation of the fisherman’s union, which knows the differing requirements of the various fishing ports and is able to wield some power, the projects are developing more efficiently. This triangular collaboration between the municipality, the union, and the association offers great opportunities for young people who want to familiarize themselves with the fishing industry. It is also helping to develop a better image for fishing. In this way the project is a good example of how to respond to the lack of young fishermen, a situation that is a problem nationally.

On the 27th of April people from Ishinomaki gathered for the inauguration ceremony to celebrate the event. According to the town councillor responsible for fishing, “Such a centre is an innovative project, and we will strive torespond to everyone who shows an interest in working in the fishing Industry”. “Fishing links us all. In order to revive our region, we hope to respond to each one of you who needs support”, added Abe Shota, chairman of the Japan Fisheries Association.

Since April Triton Oshika has hosted a 21-yearold man from Hachinohe, situated in Aomori Prefecture. He is undertaking a fishing internship. “The work isn’t as hard as it’s said to be; it’s actually quite a lot of fun. The people on the boat are very easy going and, in this house, I have been able to meet the locals”, he says cheerfully. In May another person will move in, from Shiga Prefecture on the island of Kyushu. The city is planning to create another centre of this kind in a year’s time, after identifying all the unoccupied houses and assessing the situation in every district. The municipality is determined to develop the project over the next few years.

Due to many activities coming to a halt and many inhabitants leaving the area after the earthquake there were only 2,107 fishermen in Ishinomaki in 2013, a 37% drop since 2010. Half of the fishermen are over 55 years old, so the situation is critical. In order to solve it the city is using state funding intended for regional redevelopment and is supporting several different private sector projects financially.