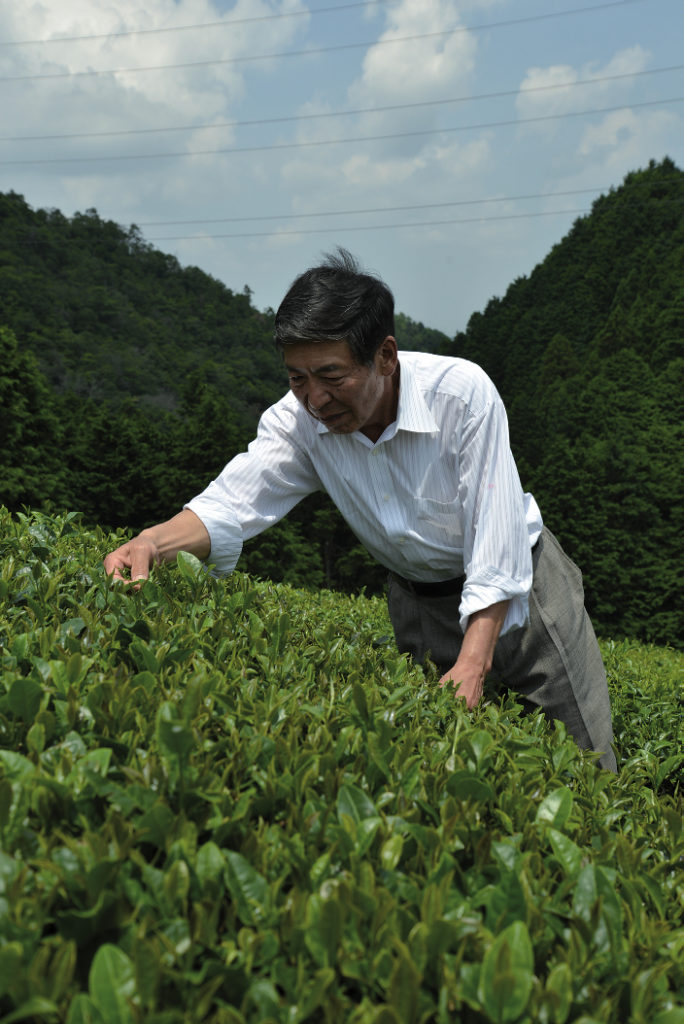 Choosing to go into organic farming was a game-changer for this farmer from Ujitawara.

Under the blazing August sun, the deep green of the tea plants contrasts with the lighter colours of the rice stems swaying gently in the breeze. Surrounding the village of Ujitawara, located to the south of Kyoto and close to the town of Uji, the fields of tea alternate with terraced rice fields. Tea plants ripple like waves over the sun-drenched slopes of the hills for as far as the eye can see.

Harima Yoshiyuki is a green tea producer. Standing among his fields he shares endless stories about the international delegations he has met. Mr. Harima is a role model for organic green tea cultivation in the region, and has hosted visits from observers from around thirty different countries at his factory perched on a nearby hill. He often travels abroad to attend seminars about organic farming, and this year was invited to Terra Madre Salone del Gusto, a large and internationally recognized event dedicated to Slow Food, which will take place this September in Turin. “Unfortunately, I can’t take part due to my mother’s ill-health,” this 68-year-old man with the air of a university professor says regretfully. Founded in 1858, his business, Harimaen, still produces tea under the prestigious label Uji-cha (tea from Uji). Imported from China in the 9th century, the custom of drinking this beverage started to take root from the 13th century, spreading from this particular region situated close to the former Japanese Imperial capital.

The conditions in this mountainous area, with its well-drained soils, plentiful rain and contrast between day and night temperatures, create an ideal place for cultivating tea. Under the patronage of Kyoto’s aristocrats, the preparing and the drinking of this light-green powder became an art in itself, an essential part of Japanese culture. Over time tea has become more than just a simple flavoured beverage, and in the streets of Uji you can find ice creams, all kinds of cakes and even beauty products containing matcha (green tea ground to a powder).

arima Yoshiyuki’s initiative has given rise to a new craze for green tea, and there’s more to it than just the history and reputation of Uji-cha. For several years now, there’s been an upward curve to exports of green tea. They have increased by 260% in the last decade, whereas domestic consumption has dropped dramatically. Foreign sales have been a shot in the arm for producers and several marketing campaigns have been launched, both by private companies and the public sector. There was no question that tea producers or the Japanese government, would look this unexpected gift horse in the mouth, but to reap the benefits, several conditions need to be met.

“The biggest problem is the regulation of pesticides,” confesses Kiwayama Eiichi from the Kyoto green tea producer’s business association. Contrary to the image Japanese cuisine has abroad for being natural and healthy, the permitted maximum residue level (MRL) for pesticides on farm produce is much higher in Japan than many other countries. Green tea is no exception and one example is that the accepted levels for acetamiprid, a neo-nicotinoid insecticide, in tea are 600 units higher in Japan than the level authorized in Europe. In 2014, the environmental group Act Beyond Trust detected a concentration of acetamiprid in green tea produced in the region around Kyoto that was well over the legal European threshold. Farmers have become aware of this issue and of its impact on exports. To comply, “some have different fields, which they treat according to foreign regulations,” Kiwayama Eiichi explains. 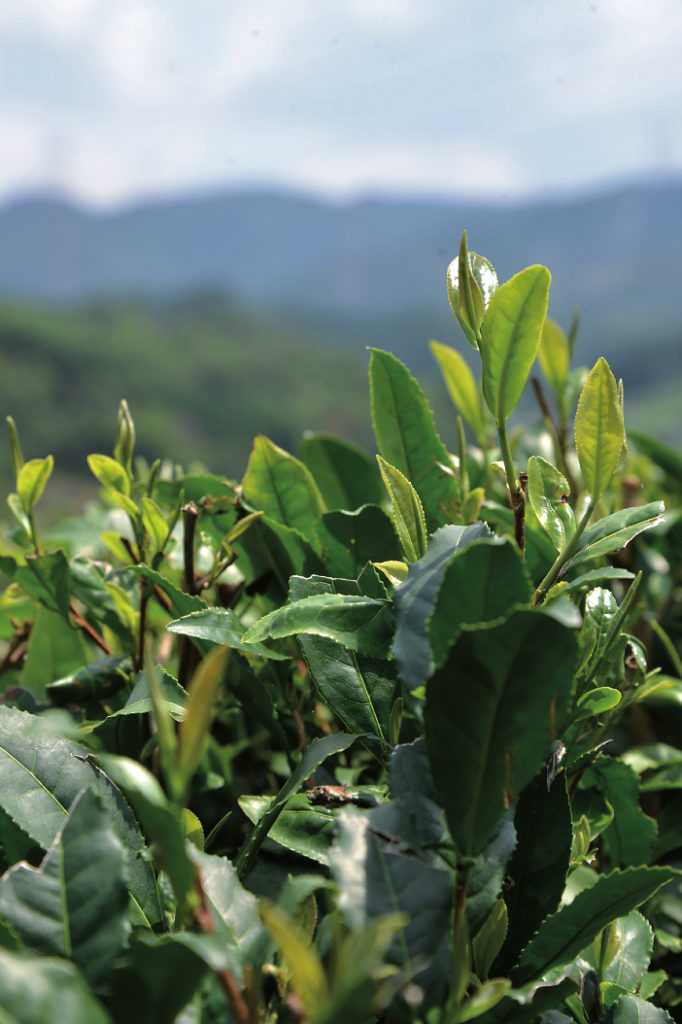 That’s why the idea of producing organic green tea has met with a lot of success, especially in the Uji region. Nevertheless, Harima Yoshiyuki didn’t expect his initiative to have such an impact. His story goes back 30 years, to when he was only 24. “It was in the aftermath of a typhoon, and the weather was warm and beautiful,” he recalls. He has always loved sake, and had just had a drink with some friends before heading out to spray pesticide on his fields. However, he suddenly became dizzy and fell unconscious. At the hospital, his doctor explained that his sudden fainting spell was linked to his liver, telling him that “If you wish to live a long life, you either need to stop drinking or stop spraying pesticides”. From then on Harima Yoshiyuki chose to start farming organically. “It’s a way of ensuring good health for my employees, and my customers who like to buy my produce,” he tells us.

It was not an easy choice to make. The weather is very humid, which encourages insects to flourish and weeds to grow. “A lot of people didn’t understand my ideas,” he remembers. Back then, growing organic tea was unheard of, so much so that his neighbours asked him to stop because “it attracts deadly insects”. With the help of a friend who was already growing tea without pesticides or chemical fertilisers, he started to farm organically, at first renting out fields owned by his father. For the first two years, the results were “catastrophic”. It was only in the third year that he noticed a positive change. Without insecticides, the infamous “deadly insects” did return, but so did their predators such as ladybirds, praying mantis and various spiders. The re-establishment of this natural ecosystem helped boost production considerably. “From the third year, we noticed the harvest was much better than the last,” he remembers. He also noticed that farming organically was less costly, as he did not have to spend money on pesticides and herbicides. Insects were not the only creatures to return either. “Five or six years after starting to farm organically, fish that we thought had disappeared for good returned to the rivers,” Harima Yoshioyuki adds with a bright smile.

In 2009 he received certification for organic food production from the European Union, following the advice of an Italian friend who wished to sell his tea in Italy. “Regulations to obtain certification were not as rigorous in Japan as in Europe back then,” says Mr. Harima, who wholeheartedly accepted the proposal. He has became the first Japanese organic farmer to be recognized by the EU, and this has encouraged numerous visits from those who wanted to observe his farming methods. “A lot of people come from abroad, but also Japanese farmers who are curious and want to learn from us,” he explains with a smile.

It’s easy to understand the the farmers’ curiosity, as this certificate, proudly displayed on his website, has helped Harima Yoshiyuki make inroads into foreign markets, especially in Europe. Organic farming appears to be a solution to several problems facing local producers today: the drop in green tea drinking domestically, the regulations concerning pesticides and the increasing age of the farming population.

Indeed, Harima Yoshiyuki’s initiative could not have come at a better time. After conquering the American market as the principal importer of Japanese green tea, his beverage has started to seduce the Old World. Appreciated for its positive effects on health, such as anti-aging and stress relief, Japanese green tea has found great success, including in France. More and more Parisian coffee shops offer drinks made with green tea. So much so that a bar dedicated to products using matcha powdered tea has opened its doors this spring in the French capital (see opposite). Despite some of the products that use green tea as an ingredient, such as cakes, still not being so well known, this noticeable increase in consumption seems to prove that Harima Yoshiyuki’s gamble is paying off. Although he still says that “I would never have imagined that one day my tea would be exported to Europe”.

Mr. Harima’s recent commercial success has helped him buy new fields that were abandoned when other farmers became too old to continue and had no one to take over, bringing his holdings to a total of 600 hectares of plantations, three times more than he initially started with before he went into organic farming. Mr. Harima has come a long way from when he had to convince his father as to the benefits of going organic and is more confident than ever that he made the right decision 30 years ago.