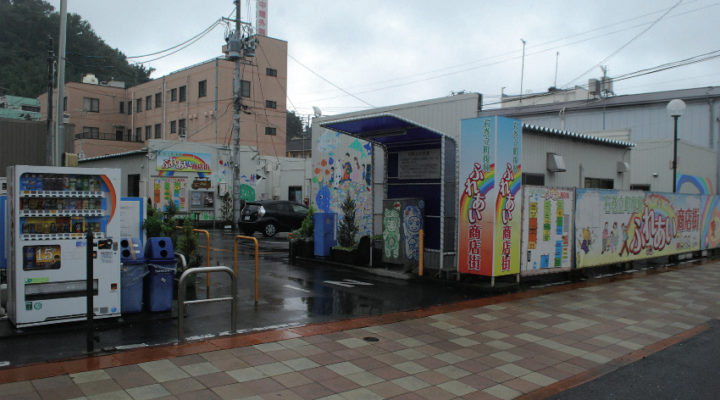 Set up on a former parking lot, the temporary shopping centre closed down at the end of October.

The closure of a shopping centre built in the aftermath of the 2011 disaster signals the start of a new chapter for Ishinomaki.

In late October the “Tatemachi human-scale shopping centre for the reconstruction of Ishinomaki” closed its doors. It had housed retailers who had lost their shops during the disasters on the 11th of March 2011, but as the lease expired after four years and nine months, its doors were finally closed. In recent years the retailers concerned have done everything they could to lift people’s morale, organising such events as musical shows and cooking demonstrations for this city that had been so badly damaged by the tsunami. “It’s not a permanent closure, just the end of a phase. For now, new initiatives will be start up elsewhere,” Sato Hidehiro, the president of the centre assured us.

This temporary shopping centre was built in 2011, nine months after the earthquake, a few hundred metres from Ishinomaki station and the town hall. The chosen location was a private carpark which was rented by the Administrative Council for Tatetmachi Temporary Shopping Centres, and the facility itself was set up by the town of Ishinomaki, the Ishinomaki Chamber of Commerce and local business owners. The prefabricated shopping centre was built by a government agency consisting of twenty-four retailers representing 21 trades. In February 2012 a hairdresser was the first to move out, followed by 14 other retailers who went back to work in their former neighbourhoods or relocated. However, other shop owners arrived to take their place. In the end, 16 outlets remained including sports and clothing shops, a jewellers and an electrical goods store. Although two of these shops will definitively close down, the others will continue operating in the city centre.

When the shopping centre was first opened, the lease was limited to one year, subsequently being renewed twice. “During the past five years, retailers who were here from the start and then those who came later all stuck together. But the closure is still sad. It would have been better to all move out together to a new place. Nonetheless, we’ll still keep in touch with each other and everyone we have met,” Sato explained.

The close represents a new beginning for each of the businesses. On November the 1st, the traditional bakery PAO celebrated the opening of its new shop located close by. “As I’m over 60 years old, I had considered retiring. But my customers kept asking me where my new shop would be. This encouraged me to continue the business. I can only thank them for their support over the past five years. It’s a way for me to say thank you to them,” owner Yashida Keiko told us.

The Ishinomaki Chamber of Commerce is well aware of the traders’ feelings. “The temporary shopping centre is based on a model from a different time, with different retailers all under the same roof. During this five and a half year period they were able to build up very strong relationships. Similar relationships have also developed with the people who came from all across Japan to help with the reconstruction. We hope that the businesses will continue to benefit by maintaining these relationships in the future,” one of the representatives explains.

During the last weekend in October, the Tatemachi shopping centre organized several events with groups of musicians, who came to show their support. On October the 29th, the very final day the centre was open, they held a handbell concert with the final song being “When You Wish Upon a Star”, as a way of wishing “prosperity to all the traders who remain in this place, which is destined to disappear”. Children from the local area also played in the band. While listening to the gentle sound of the bells, a resident confided in us that “This place was symbolic for the people and the town of Ishinomaki. And as its name indicates, it’s taught us the importance of human values”. By the end of November all the retailers will have left the premises and the “Human scale shopping centre of Tatemachi” will soon be gone. Demolition is planned to start early next year.

No34 [Series] The unsinkable boats