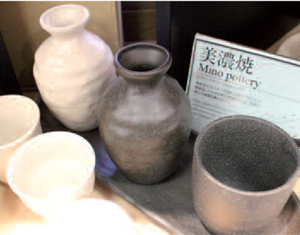 The world of sake can seem daunting, but it can be enjoyed just as simply (and often!) as wine.

So strong is the connection that in the Japanese language the word ‘sake’ can be used to refer to either the rice-based liquor specifically, or to alcohol in general. Brewed like beer, but closer to a spirit, it is also widely known as ‘nihonshu’ (Japanese liquor) and, like the worlds of ‘wine’, ‘coffee’ and ‘whiskey’, this simple name belies a vast world of flavours, sub-genres and embedded cultural practices. Besides being consumed in copious quantities at watering holes throughout Japan, sake is also drunk ceremonially as a part of Shinto wedding ceremonies, and it is often left at graves as an offering to departed relatives. Many in the UK will have tried an anonymous brand in a trendy restaurant, but few can tell their ginjo (think of a fine single malt) from their Ozeki one cup (think of drinking WhiteLightning on street corners). Differences in brewing processes can result in vastly different tastes and appearances; from the robust, acidic junmai to the complex, fragrant daiginjo. 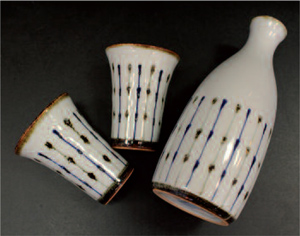 However, long before attempting to decode the detailed flavour profiles, the first question often asked by the neophyte sake drinker is “do I drink it hot or cold?”. As a rule of thumb, if the quality is good, you serve it (slightly) chilled, and if you are going to warm it, just above body temperature is usually best. When ordering sake in a restaurant, you may find yourself presented with an overflowing glass in a wooden box. In contrast to the miserly millilitre-specific measures of UK spirits, this overfull glass represents the generosity of the restaurant, as you are encouraged to enjoy both the contents of the glass and the fine craft of the box (known as a masu). At home, sake is typically served in a tokkuri (thin sake jug), with shallow saucer-like cups that require regular refilling, ideally by an attentive host. Some sake sets can be ornately decorated, but the overriding aesthetic is minimalist and rough-hewn, adding a tactile element to the drinking experience. These sets can be found in Japanese specialist shops and are an increasingly common addition to any worldly drink enthusiast’s collection of steins, flutes and tumblers. As a range of sake can now often be found in your local supermarket, there’s every reason to get more involved. Kanpai!

No51 [CUSTOM] Lunch with a special touch

No50 [TRADITION] Tango no sekku

No47 [Event] Sushi and smalltalk

[SUCCESS] History on a plate… from mongolia