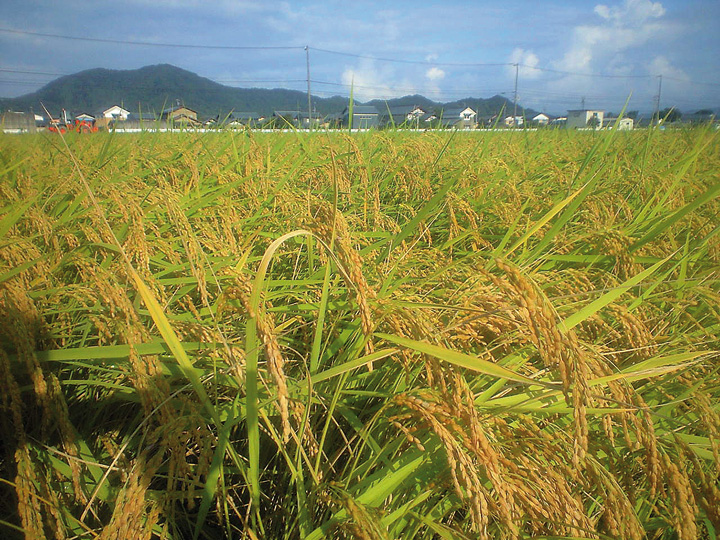 in Japan, there are over 300 varieties of rice.

Choosing which variety of rice to eat is as important in Japan as choosing bread in France. There’s a lot to take into consideration.

It’s often stated that the Japanese diet is based on rice. That’s why those who are in charge of cooking for a family need to pay great attention to rice as it’s almost always the essential ingredient in all dishes. My family is made up of my husband, me, and our three children (aged 20, 18 and 11), two of whom eat less and less at home in the evening. Nowadays, our daily consumption of rice is between 3 and 4 go, that’s to say about 600g. That represents a monthly total of around 15 kilos of rice I used to buy from the supermarket. But last autumn, with advice from a friend, I bought directly from a rice producer in the Hiroshima region.

Japanese rice includes around 300 different varieties, and their number is increasing due to the progress in the field of agricultural research. The best known are Koshihikari, which appeared in 1956, Akita komachi, first sold in 1984, and Hitomebore, which came on the market in 1991. There are also “brands” whose names are composed of a type of rice and a region, such as Uonuma san Koshihikari (Koshihikari grown in Uonuma), which is considered to be a top-quality rice and costs 1,600 yen (over £10) per kilo on average.

There are several ways of choosing rice, for example, selecting it based on the region where it’s produced. It’s acknowledged that the flavour of rice from Niigata and Yamagata is guaranteed to be good. But there’s nothing stopping you from trying rice from other regions. There are 47 prefectures in Japan! You could just as easily make your choice depending on the quality of the rice when it’s cooked – whether it’s sticky, less sticky, more sticky or really glutinous.

The producer from Hiroshima from whom I have decided to buy my rice sells three different varieties: the famous Koshihikari, Akiroman and Akisakari. I ordered the latter despite never having tasted it previously. In all, I ordered 180 kilos, the equivalent of my family’s consumption for a year. In the middle of October last year, I received the first 30 kilos. I opened the parcel to find it full of brown grains of rice, rather unusual these days. As I began to cook it, my husband cried out: “But it’s un-hulled wholegrain rice!” – at which point I remembered that the hull is kept on to preserve the rice when it’s stored. A week later, I recalled that there were places in the town where wholegrain rice could be polished, so I took 10 kilos along. It was quite simple: I put coins into the machine, then poured in the rice and chose how polished it should be. The whole operation lasted a mere 4 or 5 minutes! I collected the rice bran so that I could use it to make nukazuke (pickled vegetables). Akisakari rice has a slightly sweet taste. It’s delicious. It cost us 6,500 yen (£43) per kilo, eight times cheaper than branded rice, so I didn’t regret my choice!

It’s not so easy to choose which kind of rice to eat, but it’s definitely a very interesting process. That’s something for you to think about when you buy your Japanese rice, whether it’s precooked white rice or nigiri (rice balls), which you can find in Japanese or Asian grocery shops.

No56 [IDEA] The appeal of insects

No40 [Cooking] Minced soy chicken with ginger, egg and garden peas on rice