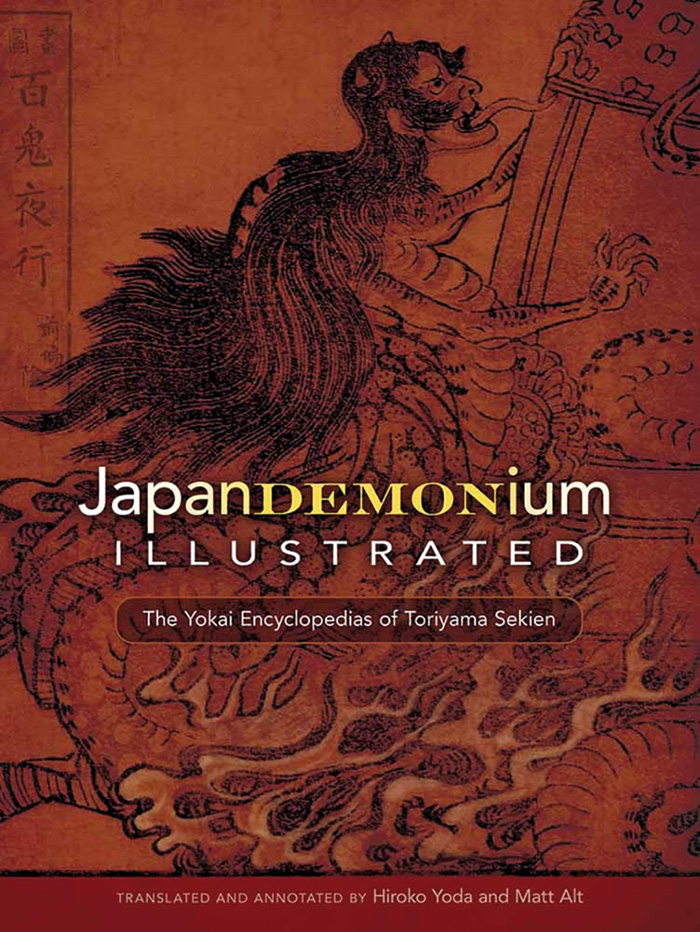 Published in 2017, this translation of works by Toriyama Sekien is a real tour de force.

After months of hard work, Matt Alt and Yoda Hiroko have succeeded in translating four of Sekien’s masterpieces.

Everybody knows the Pocket Monsters, and if you have some knowledge of Japanese pop culture and manga history you’ll remember the surreal gang of yokai that populate Mizuki Shigeru’s best-selling comic GeGeGe no Kitaro. But where do all those ridiculously scary characters come from? Why, from Japanese folklore and tall tales, of course. And when it comes to ghosts, yokai and other bizarre creatures, the unrivalled king of demonology is Toriyama Sekien (1712-88), a scholar, poet and artist who was the first to compile illustrated encyclopedia in which he explained their appearance and habits.

At the end of the eighteenth century, Sekien published four books: The Illustrated Demon Horde’s Night Parade (1776), The Illustrated Demon Horde from Past and Present (1779), More of the Demon Horde from Past and Present (1781) and A Horde of Haunted Housewares (1784). Now, these four masterpieces have been translated into English and published as one single massive tome by Matt Alt and Hiroko Yoda. The dynamic husband and wife duo first had to track down good-quality images of Sekien’s work, and then tackle the difficult translation of the texts accompanying them, but the final result is well worth the effort. Alt and Yoda are longtime yokai experts who, a few years ago, penned Yokai Attack!, a sort of tongue-in-cheek guide to surviving an encounter with these monsters. Each page of Japandemonium Illustrated features Sekien’s rendering of a given yokai and a translation of any accompanying text, while translators’ notes provide crucial context. Each book in the collection also features fascinating introductions to Sekien and his contemporaries.

But what are yokai exactly? “There are different kinds of yokai”, Alt explains. A few resemble our demons. Others are humanoid, animal, or plantlike creatures. Still others are just weird phenomena. And then you have so-called tsukumo-gami or haunted housewares with minds of their own that come directly from Sekien’s imagination. “More generally, yokai are the faces behind inexplicable phenomena. They represent people’s attempts to rationalize the chaotic, unpredictable, often inexplicable world they live in. In a word, they are superstitions with personalities.” Japanese culture and religion are animistic and polytheistic. Both Shinto and Buddhism are full of kami, as divine presences are called in Japan. Nearly anything, living or otherwise, has the potential to become a kami. They dwell among us and interact with us – usually in a scary way.

According to Alt, Sekien’s work is important because nobody before him had ever thought to group and categorize yokai with such single-minded passion. “Before Sekien’s books came out, they were mainly oral legends and folktales without set images”, says Alt, “but his clear art and writing really came to define them, and, basically, every portrayal of a yokai you see nowadays was first defined by Sekien.”

According to Alt, these books are also important for contemporary fans because they throw a new historical perspective on Totoro, Pikachu and Godzilla. “These eighteenth century bestsellers show that the business of creating and marketing monsters is nothing new in Japan. Let’s not forget that when these books came out Japan had a thriving publishing industry fuelled by a combination of advanced printing techniques and a highly literate population. By one estimate, some 22,000 books were published in Edo, Osaka and Kyoto between the 1720s and 1815 – an average of 300 new titles a year. Among the many literary genres on offer, many adults loved to read lurid descriptions of purported real-life yokai encounters – while children collected yokai karuta (game cards) the same way that today’s kids hunt for Pokemon cards”.

Though Sekien’s books are a watershed in the way yokai were perceived, he didn’t invent the monster parade. “You can find illustrated ‘demon hordes’ night parades’ in scroll form as early as the tenth century”, Alt says. “But while these scrolls, because of their very nature, were one-of-a-kind pieces of art that could be enjoyed only by their owners, Sekien’s mass-produced books could be bought by anybody. Though it’s not known exactly how many copies of Sekien’s four books were published (by using woodblock printing techniques), they certainly sold very well”.

One of the lesser known aspects of Sekien’s work is that he used yokai to poke fun at various social conventions of the time. The kind of satirical poetry known as kyoka (mad verse) was incredibly popular in the 1760s and 70s, and Sekien was clearly influenced by it while compiling his four books. In this respect his work is more like literary parody than serious research and, at that time, was mainly intended as entertainment for people.

While Yoda and Alt had fun translating Sekien’s books, it was by no means an easy task. “The language is so old fashioned, and it’s written in a difficult to read cursive script. Also, it references a lot of ancient literature and events of that time, which aren’t very well known to average readers today, even Japanese ones. We wanted to see this great piece of literature available in English, but we were also attracted to the challenge”.