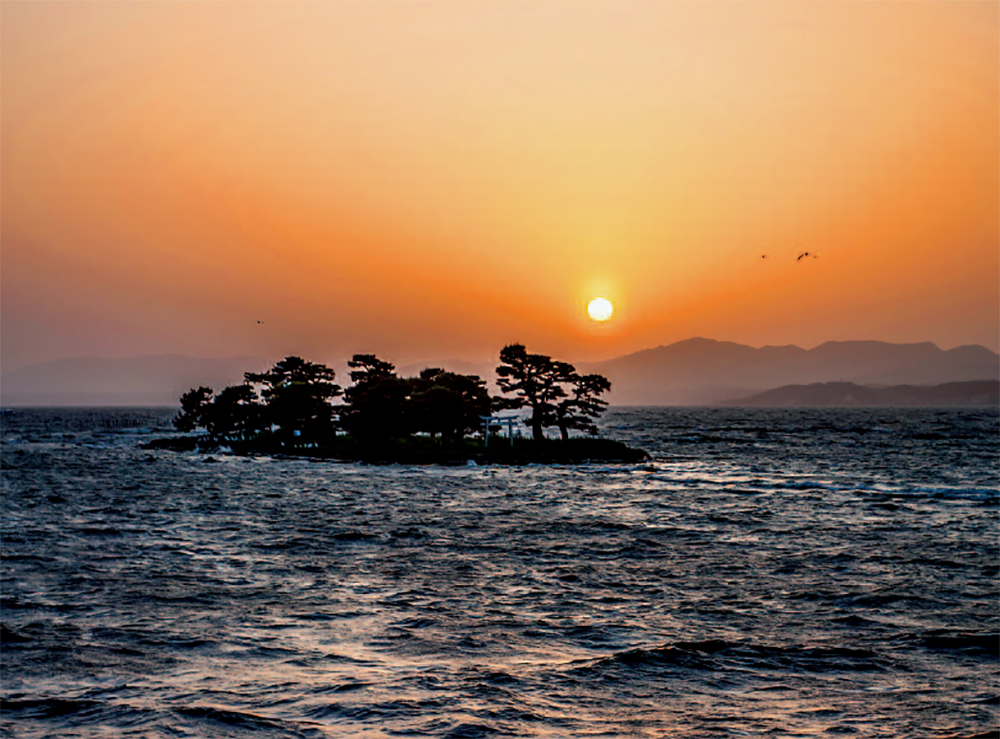 Sunset over Shinji Lake is one of the most eagerly awaited moments for tourists who are visiting the port city.

Located in the western prefecture of Shimane, the city founded by HORIO Yoshiharu is full of character.

Driving north from Hiroshima towards matsue in Shimane Prefecture, you soon find yourself immersed in rural Japan where endless rice fields surround elegant mansions with sloping wing-like roofs of brown tiles. On the hills too steep to cultivate or build on, impenetrable forest dominates, reminding you that Japan is nearly 70% forest.

Vineyards replace the rice paddies as you approach miyoshi, famous for its wines and the sea of fog that cloaks the city from autumn to spring. Then, the road takes you up into the Chugoku mountains, the Great Divide that rises up from the Pacific Ocean to run 500 kilometers west to east, separating the San’yo area to the south from the San’in area to the north. In the distance you make out the peak of mount Daisen, the Chugoku region’s Fuji. At 1,729 metres, it’s the tallest mountain in the Chugoku range.

Cruising along high above the world through mountains and unbroken forest cover, you catch glimpses of little hamlets far below, encrusted in folds in the mountains – just a cluster of houses dotted around a patchwork of rice fields. The brilliant emerald of the paddies contrasts with the darker green of the forested slopes. It’s like peeking into secret worlds, eavesdropping on someone else’s life. you almost don’t want the journey to end. But there’s plenty more magic ahead once you come down into the Shimane region. Sheltered behind the curtain of the Chugoku mountains, the town of matsue is less visited, less exploited than the cities of the Inland Sea coast. In its splendid isolation, matsue is also known as the Land of myth, the Realm of Gods.

One of Japan’s most important Shinto shrines, Izumo Taisha, lies some 40 kilometers west of matsue, in the town of Izumo. It is considered to be Japan’s oldest shrine, so old that its exact age is lost in the mists of time. But it already existed in the early 700s. Shinto’s 8million gods assemble here in the 10th lunar calendar month (usually November), enhancing the area’s mystic aura. The great deity Okuninushi no Okami is enshrined here. He was not only the creator of Japan and ruler of Izumo but also the deity of good relationships and marriage, which makes him very popular among couples seeking happy relationships.

We’d booked a night at a homely minshuku (Japanese style bed and breakfast) not far from matsue station, recommended in our guide book. It wasn’t hard to find, lying just across the road from a big temple. The disarmingly friendly owners spoke very good english. Once we’d settled in over green tea and pleasantries, they offered to drop us off near the castle so we could do some sightseeing.

The center of matsue is like a Japanese version of england’s Stratford-upon-Avon: a town immersed in history and culture, lovingly preserved even though much of the town has inevitably been modernised. matsue Castle is the focal point. Completed in 1611, it’s one of only twelve original castles left in Japan. It was built over a five-year period by HORIO yoshiharu, founder of matsue City. It is sometimes called the “black castle” after its dark wooden panels that clad the austere exterior. Around the castle, the gardens and elegant old houses create an old-time edo atmosphere.

Like Hiroshima, matsue prides itself on being a City of Water, with a splendid castle moat, canals, the river Horikawa and two large lakes, Shinji and Nakaumi.

So what better way to see the city of water than from the water itself? you clamber aboard one of the long low vessels that take you round the moat and canals. Though you’re in the middle of a city, the scenery along the banks is sometimes so lush you feel like you’re in a rain forest. Nature is everywhere: egret and heron colonies, big colourful carp, overhanging trees, dense foliage, plus some lovely old canal-side houses.

You pass under 16 bridges, some so low you have to duck down inside the boat to avoid being decapitated. All the while, gentle koto music wafts from unseen speakers as the smiling lady piloting the vessel entertains the passengers with a stream of anecdotes. We all applaud every time she steers us through any particularly difficult narrow bits. She tells us that in winter, kotatsu (low tables with heaters underneath) are placed in the boat.

Of the many pretty old houses along the banks of the canal is the former residence of Lafcadio Hearn (1850-1904), the Greek-Irish writer so enamoured of Japan that he took Japanese citizenship. He arrived in Japan in 1890, just 22 years after the country’s re-opening under the meiji Restoration (1868), when the Western world was going through its first great period of Discovering Japan. His writings about Japan brim with innocent exhilaration.

Matsue owes part of its fame abroad to Hearn’s impassioned writings. Indeed, so strong is the bond between Hearn and matsue, you’re surprised to learn that he only lived here for 15 months, between 1890 and 1891. His house on Shiominawate Street is an authentic traditional Japanese house, with its tatami-floored rooms looking out onto a charming garden. This was the former samurai quarter, and several other samurai houses still stand along the same street.

Now, 130 years after Hearn fell in love with the country, the world is going through a second great period of Discovering Japan. And, despite all the changes, you’ll still find yourself awe-struck on a daily basis – just as Hearn was – especially in a place like matsue.

And as the light begins to fade at the end of the day, matsue has one more moment of magic to seduce you. For early evening, just as the sun begins to slip towards the horizon, is the time to head for the shores of Lake Shinji to catch the sunset. you’ll find several photographers already there, cameras already mounted on tripods, awaiting the daily spectacle that’s about to unfold.

The view is enhanced by the presence of yomegashima Island, just 200 metres from the lake’s shore. With the sun slipping toward the horizon behind the tiny island, it’s one of those little spots of aesthetic perfection that abound in Japan, seemingly created by nature to inspire delight in us humans.

The island is also a Shinto sanctuary dedicated to Benten, goddess of music, arts and wealth. That’s why there’s a small torii gate at one end. And like all striking natural phenomena in Japan, there’s a charming myth to explain its existence. Literally meaning the “Bride Island”, the myth tells of a homesick young bride who drowned in the lake when trying to cross it when it was frozen over. The gods took pity on her and created the island where she fell.

As night turned the sky black, it was time to head back to the minshuku. What our guide book hadn’t mentioned was the presence of a major railway overpass just a few metres above the house. The furniture rearranged itself every time a train thundered past. This surely wasn’t what Van morrison meant when he sang of venturing “in the slipstream between the viaducts of your dreams”. Sleep only came once the trains shut down for the night.

But it mattered little. No amount of noise could break the spell the town had cast. Next day, a boat would carry us across the Japan Sea to the Oki Islands. But there would be no forgetting the day and night spent in old matsue.

FROM TOKYO, you can take an overnight coach. a daytime service is operated by ichibata and Chugoku jr bus company (12:00). by train, take the Shinkansen to Okayama, then the Yakumo express (5:40). by air, from Haneda to izumo (5 flights per day).

FROM HIROSHIMA, it takes around three hours by road travelling on an ichibata Company coach leaving from Hiroshima bus Centre.