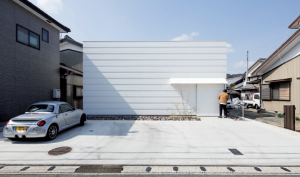 The reinterpretation of tradition is fundamentally important to the work of Atushi and Mayumi Kawamoto.

Atsushi and Mayumi Kawamoto – the husband-and-wife partners who founded mA-style studio in 2004 – are based in quiet Shizuoka prefecture, and the peaceful surroundings of that region are apparent in their approach to architecture. According to the Kawamotos, the most important thing whenever they work on a new project is how to integrate the structure into a particular environment. “Considering each box as a house, the empty spaces in between can be seen as paths or plazas and remind us of a small town enclosed in light,” Atsushi says. “The empty spaces, which affect the distances between people, are intermediate spaces for the residents, as well as elements that connect the interior to the outside”. “Human beings”, Mayumi adds, “are supposed to be able to cope with the natural world around them.

Regardless of the place we live in, we should be able to make use of the surrounding environment as it is. Of course, most people want to change nature so they can live comfortably all the time, but we’re not usually able to do that, so we need to adjust to that particular environment”. Location is also important, because each area has a clear influence on the way a certain architectural style prevails over another. “We are very interested in traditional Japanese architecture,” Atsushi says, “not as an image, but in the basic concept of space. Traditional Japanese architecture does not have thick walls, but many thin walls or layers to control distance from both inside and outside, to protect or to open up. We can choose in which layer to dwell and the different degrees of protection or privacy we want, depending on such things as the season or situation. All this is based on the interrelationship between architecture, nature and people, and these are all aspects that we can reinterpret in a contemporary way”. “One of the characteristics of Japanese architecture is its simplicity. Sometimes it is too minimalistic, but at the same time this kind of simplicity is rooted in traditional Japanese culture. Japanese architecture is also sometimes very conceptual. This can be both a strength and a weakness, as it is often only understood in a limited way”. Their relationship with tradition affects the Kawamotos’ idea of originality. “I think just copying the surface of things is not interesting, but copying the deeper concept, reinterpreting that spirit in a new way or a new shape, is a very creative thing,” Atsushi says. “In that kind of reinterpretation I think some kind of originality can happen”.

While in the West many architects pay great attention to a structure’s outward appearance and the way it fits in with the surrounding buildings, the Kawamotos, like many other Japanese architects, have approached home design from completely the opposite direction. “Instead of turning our eyes outwards to the vastness of space, we prefer to focus inwards in order to achieve serene and subtle living environments that are difficult for Western eyes to appreciate at first glance”. The Kawamotos hold a profound belief in the importance of creating functional homes specifically designed to take into account and satisfy the needs of the residents. “Everything we design is about human activity,” Atsushi says. “We are interested in what people want to do in our buildings”. As far as the social role of architecture is concerned, the Kawamotos think that the critical role of the architect today is not to generate rational structures dependent on economics or policies, but rather to create spaces for daily life that appeal to individual sensibilities. They sum this up in the statement that “Our ultimate aim is to reflect how residential architecture can be tailored to embrace both the needs of the individual and the wider community”.