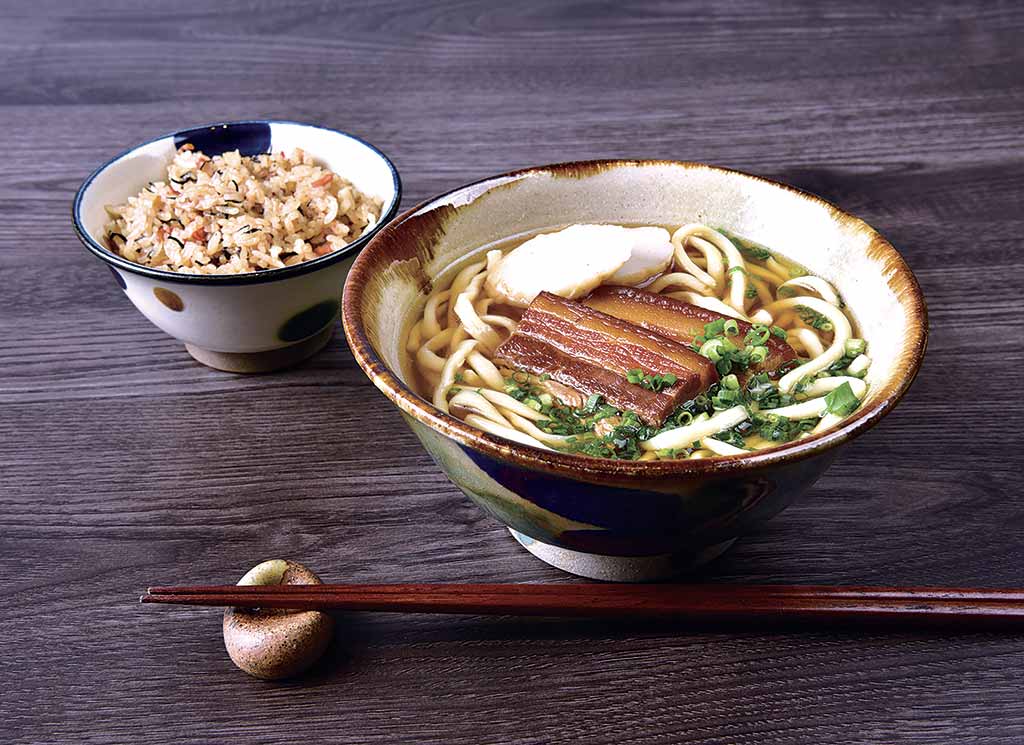 Unlike other soba, those made in Okinawa do not contain buckwheat flour.

Okinawa’s cuisine with its diverse influences is sure to captivate the most discerning among you.

Japanese cuisine is starting to become well known in Europe both for its haute cuisine as well as its popular dishes. But Japan’s regional cuisine remains unfamiliar. Okinawa is one of the most highly-regarded tourist destinations, but its cuisine is not as well-known as it should be. There was a time when The “Okinawa diet” was fashionable, with books claiming to reveal the key to the islanders’ longevity. In reality, what was presented as the Okinawan way of eating had nothing to do with what was actually cooked and eaten. But what do Okinawans really eat? Let’s take a tour of the island’s culinary delights.

What are its special features?
Its cuisine reflects the island’s history. Due to its geographic location, Okinawan cuisine is the result of interactions with a range of culinary traditions. From 1429, and for the next 450 years, the island was an independent kingdom, called the Kingdom of Ryukyu, which established diplomatic relations as a vassal state with both China and the Satsuma fiefdom (present-day Kagoshima Prefecture) in Japan.
From Chinese cuisine, Okinawa inherited the use of pork and other meats (goat, goose), and baking methods using sesame paste and peanut paste or oil, which are still found in traditional desserts. Chinese cuisine also passed on to Okinawa its philosophy of medicinal cookery: nuchigusui, according to which meals are nothing less than ‘life remedies’, and food should heal us and be a source of longevity.
From the north of Japan, the commercial shipping routes of the so-called Kitamae-bune merchant ships, which were most active from the 17th to the 19th centuries, travelled down the coast of the Sea of Japan from Hokkaido to the south, then up the Pacific coast to Osaka. It was this coastal trade that introduced kombu seaweed to the Ryukyu Kingdom, where it has since become one of the major ingredients of the island’s traditional cuisine.

More recently, Okinawa was under American occupation until 1972 and this period also left its mark on the eating habits of the local population. Canned goods imported from the United States such as pork luncheon meat or corned-beef now occupy a definite place in local cookery, as well as Mexican food like tacos, which arrived at the same time and were adapted to become Taco-rice (tacos with rice instead of tortilla).

Nowadays, when talking about cooking in Okinawa, we distinguish between two types of cuisine: Ryukyu ryori (Ryukyu cuisine) and Okinawa ryori (Okinawa cuisine). The former refers in particular to the cuisine of the ancient court of the Ryukyu Kingdom as well as to family dishes, some of which are simplified versions from the royal repertoire, while the latter refers to dishes adopted after the war.

What are examples of typical dishes?
Okinawa-soba (or Suba, Uchinasuba) : a bowl of wheat noodles with pork broth and katsuobushi (died/fermented skipjack tuna) broth, with added chives, pickled ginger, kamaboko fish pâté… Each island (Yaeyama, Miyako…) has its own variant. Whereas soba in mainland Japan refers to buckwheat noodles, Okinawan soba do not contain buckwheat flour. 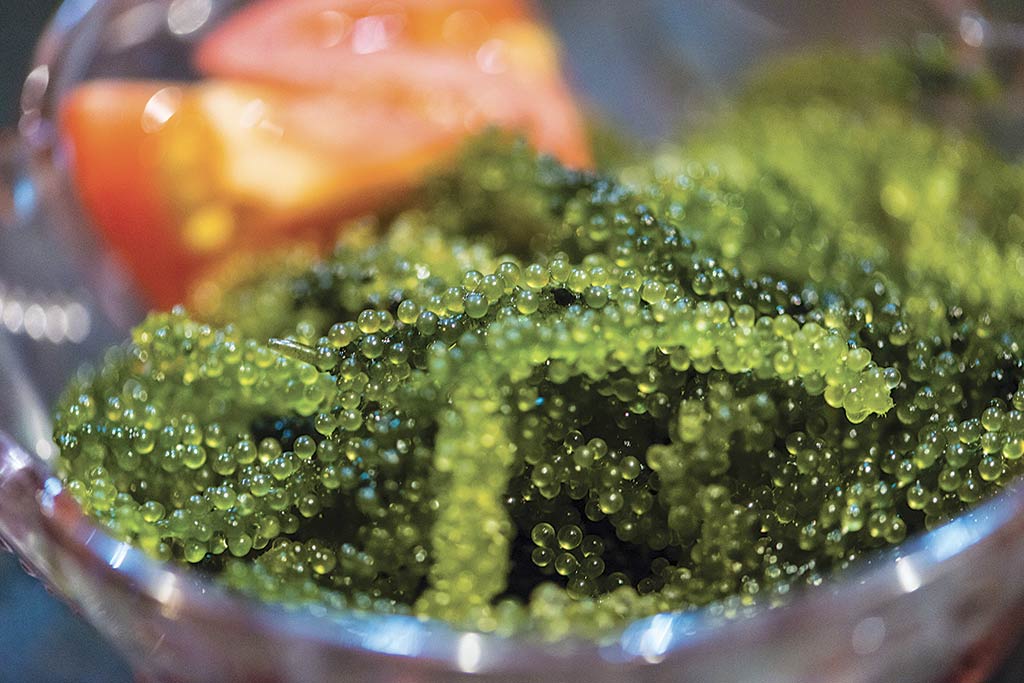 Umibudo or green caviar is eaten in a salad or with a little vinegar.

Rafute: braised pork with soy sauce, brown sugar and awamori (rice spirit), influenced by Chinese dongporou (braised pork belly). Okinawan cuisine has a wide range of pork dishes including mimiga (pig’s ears seasoned with miso and peanuts), nakamijiru (tripe broth) or tebichi (braised pigs’ trotters). There’s also an indigenous breed of pig, Agu, which was saved from extinction in the 1980s. Chikiagi : called tsukeage in Kagoshima, deep-fried dish made from fish paté or fu. Gurukun no karaage : fried local gurukan fish. Despite the proximity of the sea, the consumption of fish is not very high and it is often either fried or cooked in “aquapazza” (“crazy water” — water with salt and awamori)

Umibudo: also called “green caviar” or “sea grapes”, a local seaweed resembling a tiny bunch of grapes. Eaten in salads or cooked with a little vinegar. Seaweed is frequently eaten on the island: asa (mudsnail) soup, stir-fried pork and kombu seaweed, or other kinds of seaweed that only exist around Okinawa…
Tofuyo: tofu fermented with white koji (rice mould), red koji and awamori, beer or shochu. Sata andagi: a sweet doughnut. Made from wheat flour, sugar, eggs and oil, it is one of the pastries that came over from China.

Chinsuko : biscuits made with wheat flour, sugar and lard.
This is only a small selection to illustrate the diversity of Okinawan cuisine, but it’s enough to demonstrate the uniqueness of the country’s culinary history, which is very different from the rest of Japan’s.
This diversity, typical of countries located at the crossroads of several civilisations, is referred to by Okinawans as “champuru culture”, after their emblematic dish: a kind of fricassee of several ingredients that generates a varied, rich and intense taste.

There’s still nowhere in Europe specialising in this cuisine, but let’s hope that one fine day we’ll be able to visit the place where we can enjoy all these culinary delights….